Eleven of the 12 U.S. Senate Democratic candidates debated at the KVUE studios on Tuesday, the first day of early voting in Texas. 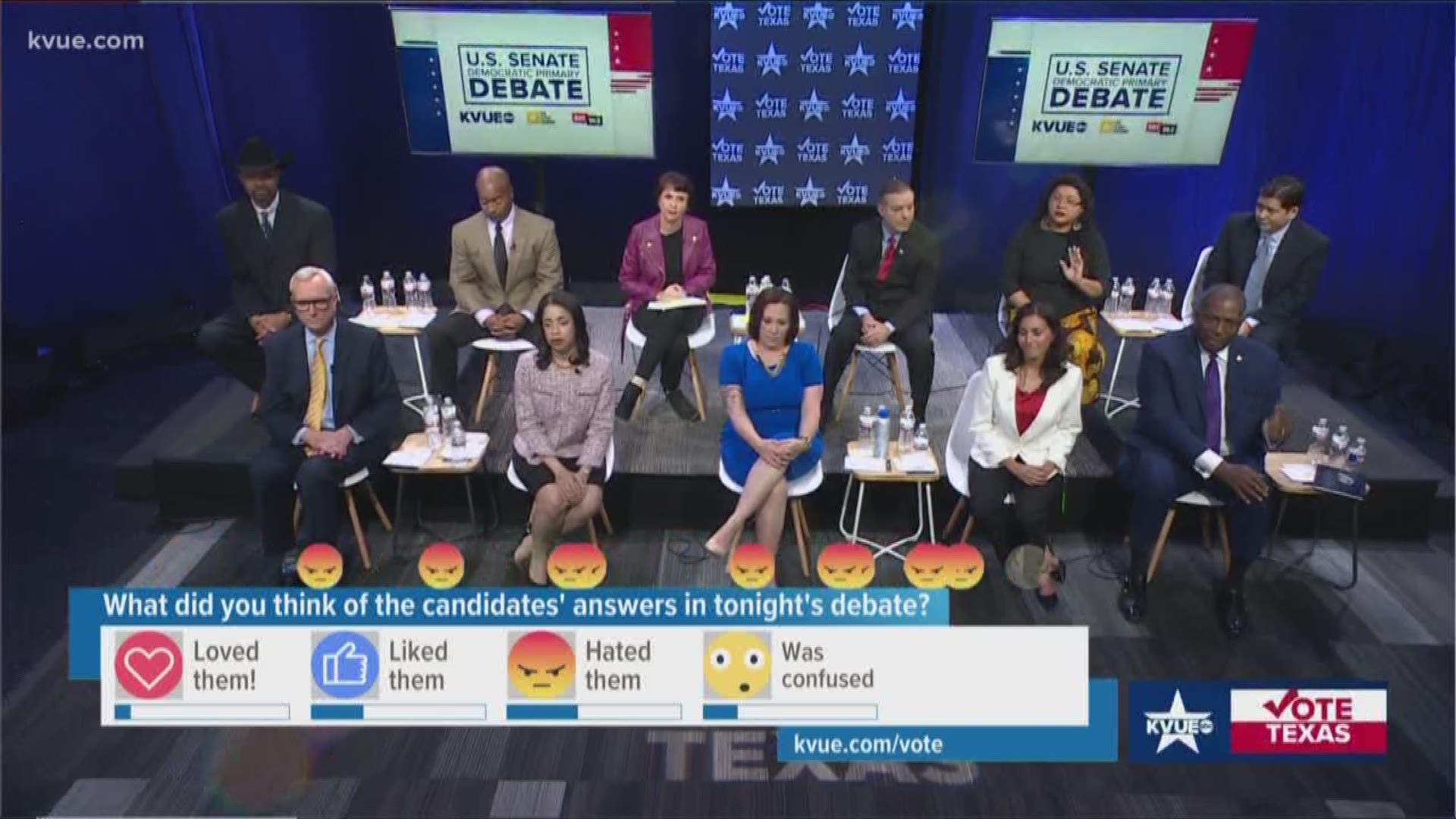 AUSTIN, Texas — Early voting in Texas started Tuesday and to honor that, KVUE hosted a debate between 11 of the 12 U.S. Senate Democratic candidates vying for incumbent Republican Sen. John Cornyn's seat in the 2020 election.

Candidates collectively answered questions ranging from which President Trump policy they support, the best quality that qualifies them to beat Cornyn and whether they support Sen. Bernie Sanders's Medicare-for-all bill as it is currently written. They also answered questions about broad election issues, such as health care access, marijuana legalization and gun control policies.

Each candidate also answered a question specifically targeted at them, with their opponents given the opportunity for rebuttal. Hegar was asked her response to criticism of her Democratic Senatorial Campaign Committee endorsement, West was asked why voters seeking fresh faces should elect him, Tzintzun Ramirez was asked how she would balance conservative Texas values with her progressive views and Edwards was asked for which policy issue she would break away from the Democratic mainstream to support business growth.

Bell was asked why voters should select him if they're looking for experience, Cooper was asked about his proposal to expand background checks to include high school conduct and suspensions for people under 25 and Hernandez was asked what sacrifices she believes people should be prepared to make to address the climate crisis.

Finally, Harris was asked to name a policy that could be put into place to make an impact on immigration reform, Garcia was asked how Democrats could reclaim the "family values" and national security platforms, Ocegueda was asked how the political system could potentially be reformed and Foster was asked about his "transformative economic plan."

Texas voters who wish to cast their ballots early can do so from Tuesday, Feb. 18, through Friday, Feb. 28. The Texas primary election will be "Super" Tuesday, March 3. Voters will be able to choose between the 12 Democrats, Cornyn and four other Republicans in the race: Dwayne Stovall, John Anthony Castro, Mark Yancey and Virgil Bierschwale. Whoever wins the Texas primary for each party will face off in the November general election.

For more information about where and when you can vote, what you need to bring to the polls and more, check out KVUE's early voting guide. Goudeau also profiled several of the Democratic candidates in the weeks leading up to the start of early voting for her Texas This Week segment. You can find those videos on the Texas This Week page on KVUE.com or on the KVUE YouTube page.

And of course, KVUE will be bringing you the latest results, news and analysis as the March 3 primary gets underway in Texas and other Super Tuesday states. For the latest updates straight to your smartphone, make sure you download the KVUE app. Within the app, you can select the topics you want to be notified about, including Vote Texas and politics.