The president of the Galveston Island Democrats filed a complaint in late 2020 calling efforts to overturn the election results in four other states "frivolous." 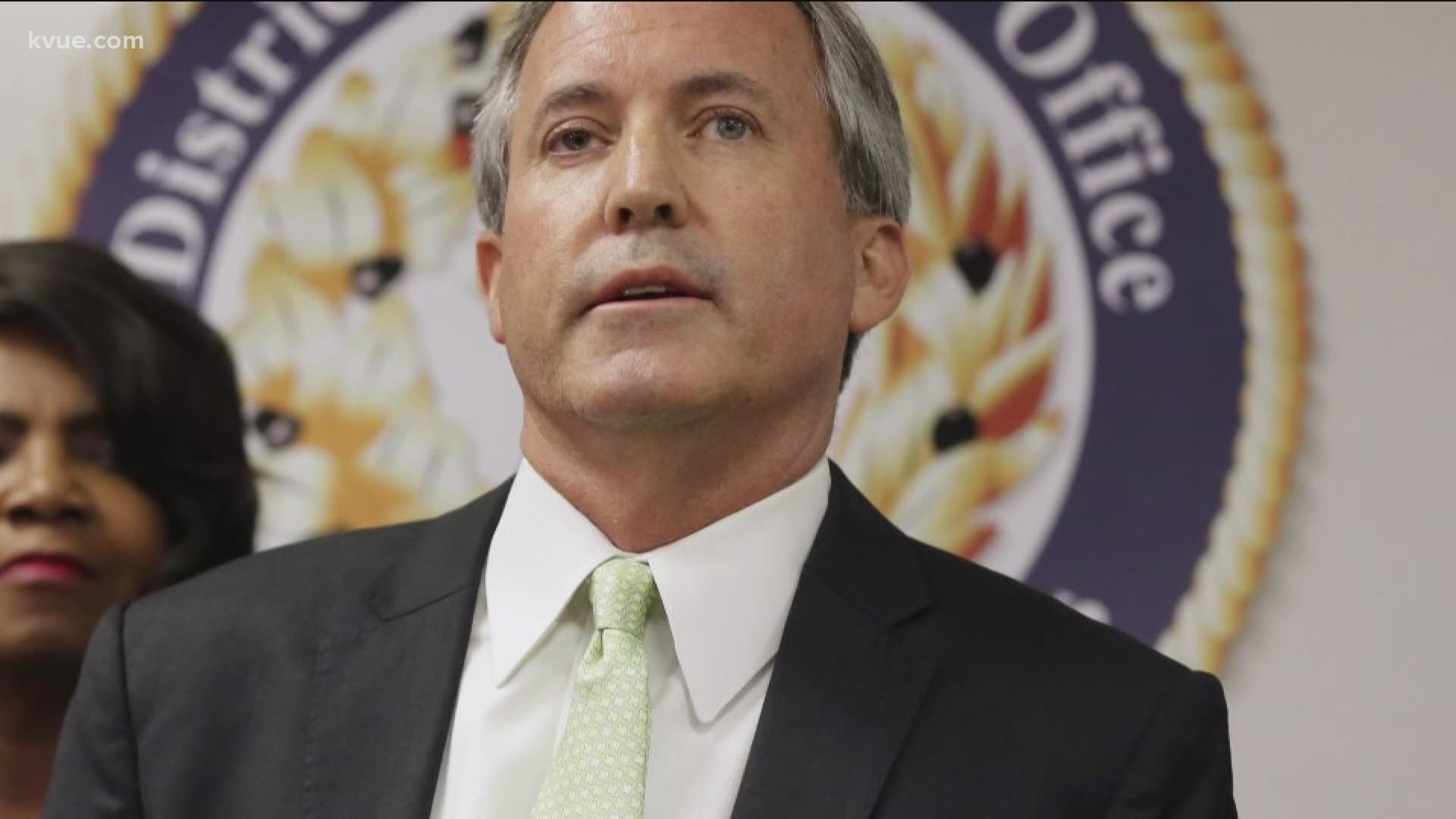 The investigation, handled by the State Bar of Texas, will pursue whether or not Paxton's efforts to overturn the 2020 election results in Michigan, Georgia, Wisconsin and Pennsylvania constituted "professional misconduct."

Kevin Moran, the president of the Galveston Island Democrats, filed the complaint originally in December 2020, calling the lawsuits filed by Paxton "frivolous."

"Paxton has committed misconduct by filing a frivolous lawsuit asking the Supreme Court of the United States to throw out the votes of 20 million people, Republican and Democrat, in four states, essentially to declare the elections by those states invalid," Moran wrote in his complaint to the Texas State Bar.

Moran provided the documents he submitted to the State Bar of Texas as well as the responses, including the decision on the appeal which granted the investigation. The State Bar could not independently confirm any ongoing investigation.

"The State Bar is required by law to keep disciplinary matters confidential unless they result in a public sanction or are filed in district court, so we are unable to comment or even confirm a grievance or investigation," a spokesperson said.

In a statement on Twitter, Paxton responded Thursday calling Moran's complaint itself "frivolous."

I will NEVER stop fighting to protect your votes, or our elections! My statement Regarding the frivolous State Bar claim: ⬇️#tipofthespear pic.twitter.com/eQ18zHsU7X

Initially, Moran filed the complaint in December 2020. The State Bar dismissed the grievance at the time. Upon being read by The Board of Disciplinary Appeals, who is appointed by the Texas Supreme Court, the Board found the complaint was worth investigating.

Moran received the response on June 3.

In an interview on the Chris Salcedo Show, a radio talk show based in the Dallas-Fort Worth area, Paxton said he was not sure he had received the notice yet. According to a State Bar of Texas spokesperson, an attorney has 30 calendar days to respond to a complaint. The attorney gets to choose whether to proceed before a private evidentiary panel or in public district court. Only if the panel results in a trial that results in a public sanction, or if the attorney chooses to go through public district court, does the investigation become public.

Paxton's communications team did not respond to an interview request Wednesday. On Thursday, a spokesperson sent the following Tweet and excerpt from the show as Paxton's response.

Listen to my interview with Chris Salcedo on @WBAP247NEWS where I address the Texas State Bar complaint ⬇️https://t.co/6NviWkImYu

In the interview, Paxton calls the State Bar of Texas "more liars than lawyers."

Paxton's lawsuit to overturn the results of the 2020 election was based on states allegedly not following their own election laws. The case was thrown out by the Supreme Court of the United States.

Paxton's campaign spokesperson also released the following statement regarding the complaint and investigation into Paxton for professional misconduct.

"There is no greater guardian of our democratic republic than secure elections. An unsecure, unconstitutional election is an untrustworthy election. When states blatantly ignore their own election laws and votes pour in for days after the election closes, there must be a legal remedy to ensure a just and fair result.

"When Michigan, Pennsylvania, Georgia and Wisconsin violated their own state election laws and the Constitution’s Electors Clause, Attorney General Paxton stepped up on behalf of disenfranchised voters and brought this issue before the United States Supreme Court. Seventeen other states sided with Texas while two justices dissented from the decision and wanted to take up the case.

"The complaint filed with the State Bar of Texas over litigation that went before the Supreme Court is as laughable as it is blatantly political. The complainant is the president of the Galveston Island Democrats who made a frivolous allegation to the State Bar and then leaked it to a reporter to get press.

"Perhaps the more concerning issue than this low-level stunt is the fact that Democrats in Texas keep showing just how much they can't stand election integrity."

In response to the Paxton campaign response, Moran issued a statement to KVUE as well.

"You lie about the information becoming public just as Paxton lied about election fraud in the lawsuit. There was no 'leak' and you and Paxton know it. I am not legally or ethically bound to keep this information secret. The state bar and the Supreme Court Board of Disciplinary Appeals provided me the information to use, discuss and distribute as I see fit. I shared it freely under my own name and disclosed my political affiliations for all to know. It was-and is-MY information and I am free to share it. It’s my First Amendment right. So stop lying about me and about the fraudulent lawsuit Paxton filed."

This is not the first investigation into Paxton either. He faces fraud charges from 2015 when he was accused of convincing investors to buy stock in a technology firm without disclosing he would be compensated for it. That case has still not gone to trial.

Last year, several aides accused Paxton of abusing the power of his position to help a political donor. Those staffers have since been fired, put on leave, or resigned.

Paxton's Republican challenger for Attorney General, the current Texas Land Manager George P. Bush, did not comment on the investigation.

A Democrat running for the seat, former Galveston Mayor Joe Jaworski, issued a statement via email:

"I’m pleased that the Texas Bar is investigating Mr. Paxton’s unprofessional and purely political conduct. Every lawyer in Texas knows he filed a frivolous complaint seeking to overturn the 2020 election in the United States Supreme Court last December, and our Texas State Bar is charged with policing such unprofessional conduct of its members pursuant to the Disciplinary Rules we lawyers are bound to uphold. I look forward to learning the results of a fair, thorough investigation of Mr. Paxton’s unacceptable, unprofessional conduct."