The runoff election will be held on Tuesday, May 26. The winner will face Republican John Cornyn. 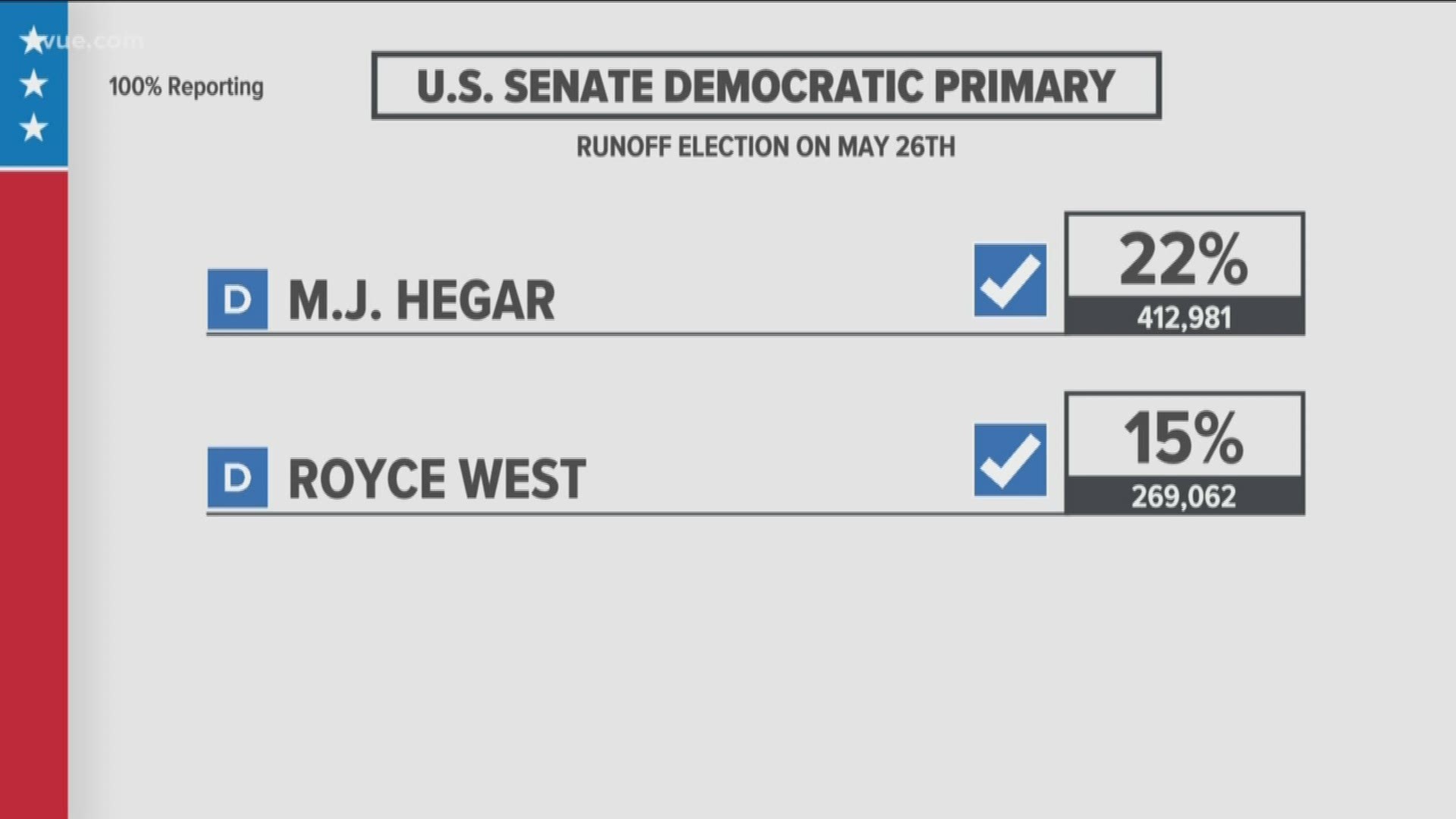 AUSTIN, Texas — It’s official: there is no clear winner of the Texas Democratic nomination for the U.S. Senate general election in November.

However, according to the Associated Press, MJ Hegar has advanced to the May 26 runoff.

"John Cornyn, your time is done because you've sold us out. We've given you plenty of time and it's over. You're fired. Pack it up, buttercup, because I'm coming for your seat," Hegar told supporters at her watch party Tuesday night.

State Sen. Royce West will challenge Hegar in the May runoff after Cristina Tzintzún Ramirez conceded on Wednesday.

“Though we will not advance to a runoff, we accomplished something great." said Tzintzún Ramirez. "This campaign was consistently underestimated. I ran as a progressive, as a Latina, and as a working mom. We ran this campaign unapologetically, and we all have so much to be proud of for what we’ve accomplished.”

"Every single candidate that is in the race is ... somebody who I am happy to partner with when we take on John Cornyn after the runoff, and I am confident that we are going to be taking him on in November," Hegar told KVUE after declaring she's going to the runoff.

Hegar’s name may be familiar to Texas voters. Just two years ago, she ran for the U.S. House of Representatives for Texas’ 31st Congressional District. After winning the Democratic nomination, she was defeated by 3% by incumbent Republican John Carter. Prior to getting into politics, Hegar – who is originally from Leander, Texas – served three tours in Afghanistan as a combat search-and-rescue and medevac pilot for the U.S. Air Force. During a rescue mission, Hegar was injured by enemy gunfire and, for her injuries, she received the Purple Heart. She has also been awarded the Distinguished Flying Cross with Valor.

In the weeks leading up to the primary election, Hegar topped several polls as the candidate most likely to win the Democratic nomination.

Now, she hopes to keep the momentum up going toward the runoff and eventually the general election.

"We just keep driving all over the state," Hegar said. "It's a huge state. It's a beautiful state. I'm loving that. We've driven tens of thousands of miles just talking to regular folks. [John Cornyn] doesn't climb down out of his ivory tower very often, unless it's behind a velvet rope for a photo op."

Hegar believes every Texas citizen should have access to Medicare. She supports universal background checks for gun ownership, a ban on the sale of assault weapons to the public and has called for an end to open carry. According to her official website, she is an advocate for reproductive rights, LGBTQ+ rights and veterans’ rights. She has also said that Americans “must set aggressive goals for the expansion of clean, renewable energy” and that “Texas has the opportunity to be America’s leader in wind and solar energy.” To read more on Hegar’s stances on a variety of a political issues, visit her website.

West is the managing partner of West & Associates LLP and has represented the 23rd Senatorial District for Dallas County since he was first elected to the Texas Senate in 1993. West has also served the Texas Democratic Party as the convention chair and he represents Texas on the Democratic National Committee and its executive committee. According to his official website, during his time as a state senator, Royce has advocated for quality education and criminal justice reform, among other issues.

West supports a Medicaid expansion. He believes America must pass federal legislation to eliminate mandatory minimum sentences and end private for-profit prisons. He supports student loan debt relief programs and has said that community colleges should offer free tuition for low-income students. West also supports universal background checks for gun owners and a ban on assault weapons. He has also said that a major way to improve border security would be to expedite the adjudication process for asylum seekers. For more information on West’s stances on a variety of political issues, visit his website.

West released the following statement after earning his spot in the runoff:

“I am humbled and grateful for the support I have received from across the state in this race, and honored to have a chance to continue this race to represent our great state in the United States Senate.

During the course of this campaign, I have had the opportunity to meet a number of fine people who were also running for the job of United States Senator. I’ve listened as they’ve shared their ideas and vision for our state over the past several months in multiple forums across Texas.

To my colleagues in this hard-fought contest: thank you for helping build the most diverse field of candidates in the history of this state to seek public office. Thank you for sharing your ideas, and for challenging your peers in this race. I am confident that some of the faces who will be the future of the Texas Democratic Party were on the stages of many forums across our state in this race, and I encourage you to remain involved, and not give up your desire to represent the people of Texas as an elected official in government. It is truly among the highest callings of public service.

To my wife, Carol, I say thank you for being with me on this journey. I thank my family for all the support they have provided me. I thank my campaign staff for their work and leadership, and, most of all, thank the voters of this state who made Royce their choice.

I believe we are well-positioned to win the runoff. The runoff is a brand new day, and I look forward to representing Texas in the United States Senate next November."

In a press release sent on March 4, Tzintzún Ramirez said she has not yet decided on her next steps, but she will continue to fight the politics of hate and advocate for working Texans. For now, she is looking forward to spending time with friends and family, and in particular, her three-year-old son, Santi.

Once a winner is declared in May’s runoff, that candidate will face incumbent Republican Sen. John Cornyn in the general election on Tuesday, Nov. 3.