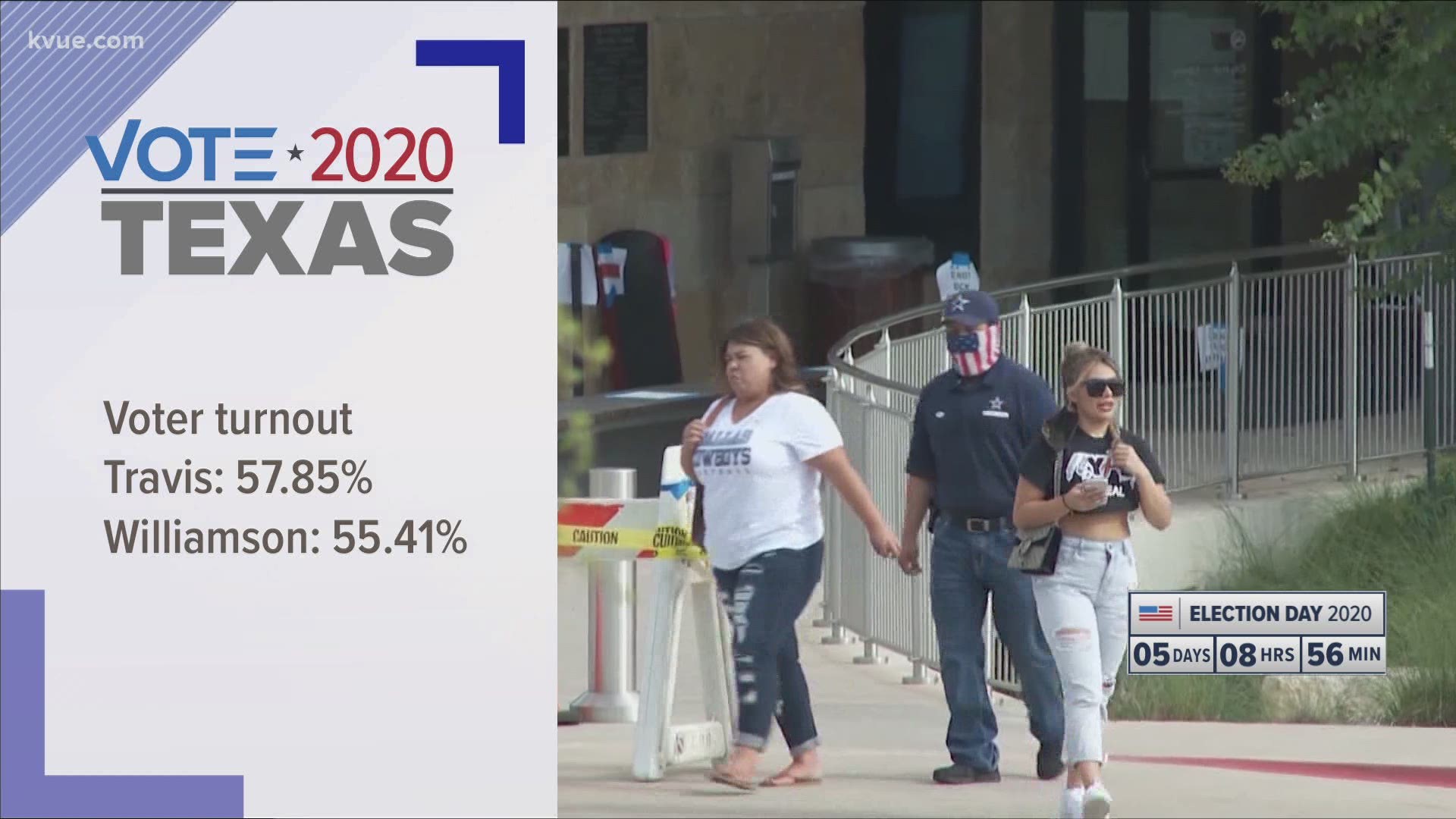 Early Sunday morning, a post on Austin's subreddit gained some traction: a tweet from Dave Wasserman, the U.S. House editor for CookPoliticalReport and an NBC News contributor.

The tweet claimed that Hays County became the first county in America to surpass its own total 2016 voter turnout. This is significant because there are still several days left in the early voting period in Texas.

According to the Texas Secretary of State's Office, Hays County reported 71,945 votes in the entire 2016 election. With five days left in the early voting period, the Secretary of State's Office has already reported 74,808 cumulative in-person and mail voters. So, as of Monday, Oct. 26, Hays County has, in fact, surpassed its 2016 election voter turnout.

It happened: Hays Co., TX just became the first county in America - to my knowledge - to surpass its total 2016 turnout.

Wasserman also reported on Sunday Williamson County was among three other counties at 96% to 98% of its 2016 voter turnout.

But by Monday evening, Williamson County officially surpassed 2016 with more than 211,000 voters – or about 56%. As did Denton County in North Texas with 53%, according to KVUE's news partners at the Austin American-Statesman.

While Travis County had not yet surpassed overall turnout from 2016 at the time, on Monday, it surpassed early voter turnout from four years ago, with four days still left in the early voting period.

Ross Ramsey, the executive editor of the Texas Tribune, credits the numbers to population explosions in the counties.

"Well, I think part of this is that those are really rapidly growing counties. There are more people there. And if there are more people, there are more voters. This is an election year where the people who are voters, who are registered voters, seem pretty excited about voting, either to vote for their side or against the other side, whatever that might be. But, you know, it's not completely surprising to see counties that are growing as quickly as Williamson and Hays has also seen really big growth in their electorates," Ramsey said.

RELATED: Could the Hispanic vote affect who wins Texas?

"It's incredible ... Just the energy with people coming in to get signs, people volunteering," Gilby said.

Gilby said this is the first time there are more than just a couple of Democratic candidates on the ballot in Williamson County, a historically Republican county.

It is also the first time her party has spent money on mailers – some $17,000 – sent out this past Saturday.

"One thing we love to say in Williamson County is Texas is the biggest battleground state and the road to turning Texas blue runs right through the middle of Williamson County. And we really do, you know, we see it happening. We feel it. And, you know, I'm just, I can't wait 'til the votes are counted. I think we're going to be very happy on election night and it's going to get our country back, moving back in the right direction," Gilby said.

"Four years ago, the total number of registered voters in Williamson County was 306,811. This year there are 376,931.  This growth is attributable to the massive growth of our population due to people fleeing high tax and high regulation states like California, New York, and Illinois and also those being priced out of their homes by the high tax policies of the City of Austin and Travis County.  We had a huge effort last year to identify these new residents and get them registered to vote.  Now those people who we have worked hard to register to vote are coming out to vote.  Add to that, the absolute enthusiasm that the Republican voters have in wanting to go out to vote to re-elect President Donald Trump, it is a ready-made recipe for record-high turnout."

When Hays County Democratic Chair Donna Haschke heard her county's voter turn out has already surpassed all of 2016, she was initially surprised.

"And the second reaction was total elation," Haschke said.

She said volunteers and staff have been hustling to get more voters from the new suburbs. Since spring, they've registered 10,000 new voters.

"A lot of people that move from Travis County and think they're registered to vote. And we have to re-register them because they have to vote in the county in which they reside. So, we've done a lot of work on the ground, work just registering voters," Haschke said.

Since 2014, she said volunteers and staff have made a concerted effort with coordinated campaigns. She said it's something they have to continue to work on, improve on and build on.

Hays County Republican Chair Bob Parks said, "We just had a lot of people working really, really, really hard. The Republican vote is generally stronger in the few days of the election, including Election Day. An overwhelming number of people already voted, and we feel pretty good about it at this point in time."

With 97% of its eligible voters registered to vote, Travis County has also made national headlines. In terms of voter turnout, Travis County saw a surge of turnout in the opening days of early voting, but the daily turnout has tailed off a bit.

"We may see 25,000 people vote per day instead of our initial estimate of 30,000 people voting," Travis County Clerk Dana DeBeauvior told KVUE on Oct. 24. "That won't make that much of a difference in the overall turnout though. We're still going to see 600,000 people vote early by the time this is over, and it's possible we could go higher."