Major corporations come out against proposed voting restrictions in Texas

Dozens of big companies, chambers of commerce and local businesses, including Austin-based P. Terry's, issued a statement reflecting the biggest pushback yet. 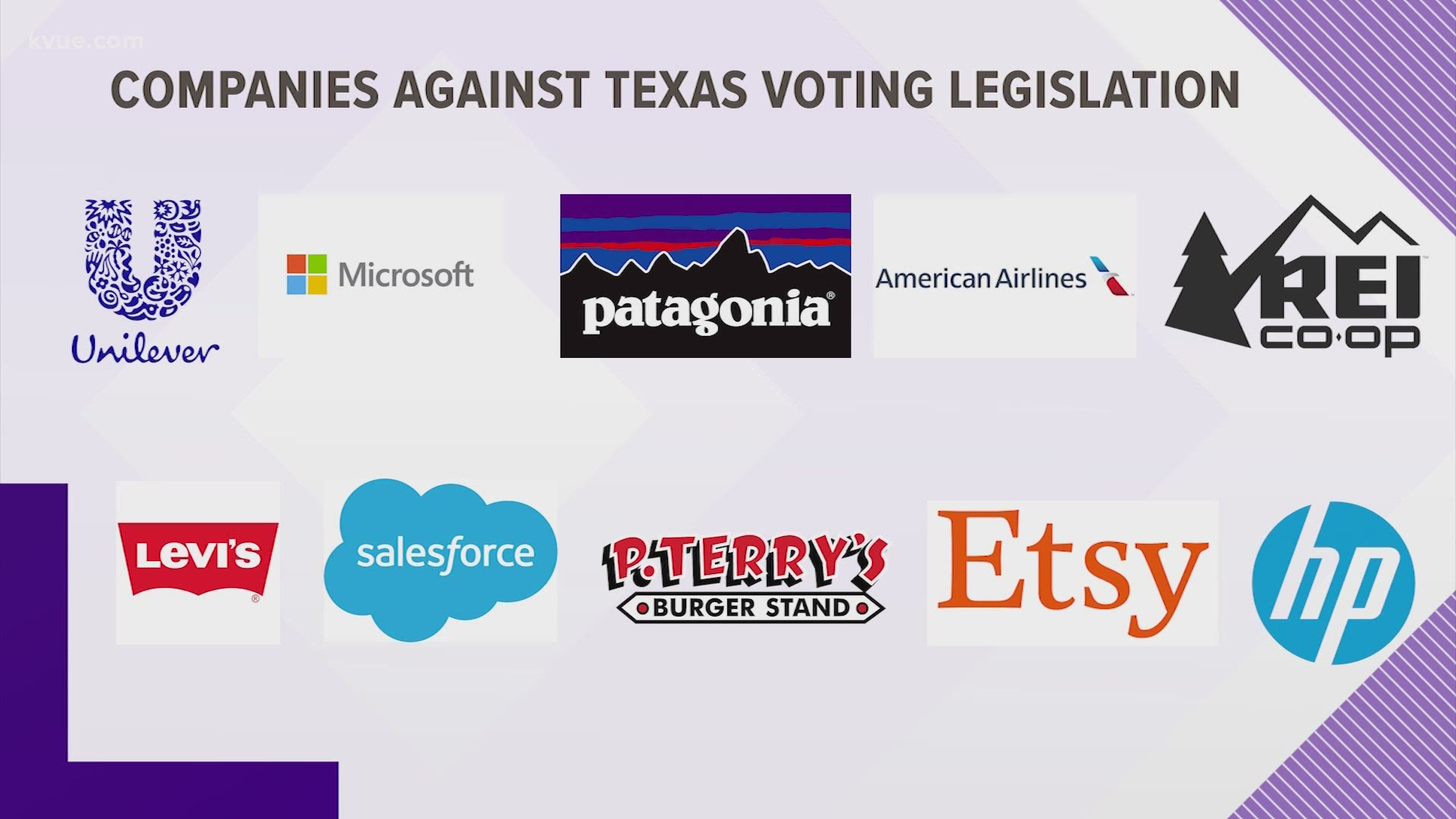 (Texas Tribune) With less than a month left in the legislative session — and Texas Republicans split on which package of proposals might cross the finish line — Hewlett-Packard, Microsoft, Unilever, Patagonia and two dozen other companies are urging state lawmakers not to pass new restrictions on voting.

In the biggest pushback so far by business against the GOP's legislative bid to ratchet up the state’s already restrictive voting rules, national companies joined in a statement voicing their opposition Tuesday with local businesses and several local chambers of commerce representing LGBTQ, Hispanic and Black members of the business community.

“We stand together, as a nonpartisan coalition, calling on all elected leaders in Texas to support reforms that make democracy more accessible and oppose any changes that would restrict eligible voters’ access to the ballot,” the businesses wrote in their letter. “We urge business and civic leaders to join us as we call upon lawmakers to uphold our ever elusive core democratic principle: equality. By supporting a stronger trustworthy democracy, we will elevate our economy.”

The statement does not address specific legislation, but comes as Texas Republicans press forward with bills in the name of “election integrity” despite little to no evidence of widespread fraud and warnings from voting rights advocates and lawyers that many of them would be disproportionately harmful to voters of color.

Following the recent passage of new restrictions in Georgia, major corporations began responding to criticism about staying out of that fight by largely coalescing around joint statements that generally stated their opposition to election changes that make it harder to vote.

In Texas, Fort Worth-based American Airlines and Dell Technologies, headquartered in Round Rock stood alone in declaring their opposition to specific Republicans’ legislative proposals that would further restrict voting in the state.

The airline, which also signed onto Tuesday's statement, took aim at Senate Bill 7, one of the broadest pieces of voting legislation this year that restricts early voting rules and hours, how voters can receive applications to vote by mail and the distribution of polling places in diverse urban areas, among several other provisions. Dell came out against House Bill 6, which makes it a state jail felony for local election officials to distribute unsolicited applications to vote by mail, requires people assisting voters to disclose the reason a voter needs help casting a ballot — even if it’s for medical reasons — and enhances criminal liability for election workers’ treatment of partisan poll watchers.

Microsoft previously raised concerns with HB 6's prohibition on proactively sending vote-by-mail applications — an initiative taken up by several Texas counties last year as voters sought to avoid the dangers of in-person voting during a pandemic.

Both favored by leadership in each chamber, SB 7 and HB 6 are the centerpieces of Texas Republicans’ effort this year to enhance voting restrictions following the 2020 election and the near-record turnout it garnered.

Both bills have faced intense pushback from local leaders, Democrats, civil rights groups and advocates for people with disabilities. That collective opposition has centered on concerns that the legislation will almost certainly make voting harder for groups Texas’ voting rules have long marginalized — voters of color, voters with disabilities, voters with limited English proficiency — or violate federal safeguards for those voters.

Some of those advocates have urged corporate America to wade into their push to stop the bills from advancing in the Republican-controlled Legislature — a campaign that has harkened back to 2017 when corporate outcry to a so-called “bathroom bill” to restrict transgender Texans’ access to public facilities helped stopped that measure from passing. But the business response to proposed voting restrictions in Texas has so far fallen short of that.

As the fight over new restrictions moved from Georgia to Texas, the state’s Republican leadership moved to quickly condemn businesses scrutinizing the proposals under consideration during the 2021 legislative session.

Gov. Greg Abbott — who declared “election integrity” a legislative priority — backed out of throwing out the ceremonial first pitch at the Texas Rangers' home opening game and said he would boycott any other Major League Baseball events over its decision to pull the All-Star Game from Georgia in response to new voting restrictions there. Calling it “absolutely ridiculous” for the MLB to take a position on the Georgia law, Abbott in a Fox News television interview indicated he was sending a message to Texas-based companies and others eyeing a move to the state — and the financial incentives that are often used to lure them.

Lt. Gov. Dan Patrick angrily targeted American Airlines during a press conference in which he described those raising concerns of voter suppression a “nest of liars.”

“Texans are fed up with corporations that don’t share our values trying to dictate public policy," Patrick said in a separate statement responding to American Airlines' opposition to SB 7.

In the Texas House, the possible retribution for companies that have come out against the bills has been mostly symbolic so far. Republicans sought to inject the dispute into the chamber’s consideration of the state’s massive budget bill last month, offering amendments to withhold state funds from businesses that publicly opposed legislation “related to election integrity.” Those proposals were ultimately kept off the budget.

Those threats — coupled with Republican demands for corporations to stay out of policy disputes outside of their business realm — did not deter the companies that signed onto the letter. Patagonia has even been sharing its own analysis of "voter suppression legislation," which includes SB 7, HB 6 and several other bills, with other companies considering opposing proposed restrictions.

"Companies need to do more than solely focus on profit ... and empowering their communities can be really good for business and thats something we're seeing that's a good trend," said Corley Kenna, a spokesperson for Patagonia. "I hope more companies speak out on these issues, mostly because I think its important to have companies step up where government seems to be falling short."

In Houston, the proposed voting restrictions have divided the region's most prominent chamber of commerce with some members of the Greater Houston Partnership urging its leadership to denounce portions of SB 7 and HB 6 in light of the organization's commitment to oppose racial injustice. As passed in the Senate, SB 7 would prohibit various Harris County voting initiatives, including extended early voting hours and drive-thru voting that proved popular among voters of color, and would require the county to redistribute its polling places away from Houston's urban core, which has more Hispanic and Black residents, to suburban areas that have more white residents.

The influential organization's leadership ultimately moved to not speak out on the bills, so on Tuesday a group of 175 business leaders, including 10 members of the partnership's board, wrote to House Speaker Dade Phelan to oppose portions of the legislation, the Houston Chronicle reported.

As the legislation stands now, SB 7 is a duplicate version of HB 6 following a House Elections Committee vote to gut the Senate legislation and rewrite it, but the Senate can still revive its priorities. The full House may debate the bill as early as this week, but the final version of SB 7 will likely be decided behind closed doors.

Both Patrick and Phelan have separately defended the proposals as reforms to make elections more consistent throughout the state. But Patrick has deemed SB 7 a legislative priority while Phelan has said he supports the proposals from HB 6 that replaced the original language in the Senate legislation.

The reconstituted SB 7 is likely headed to a conference committee made up by members of the two chambers who will work to consolidate the differences between the two versions of the bill — and possibly bring back its original restrictions.

In a statement Monday, state Sen. Bryan Hughes, the Mineola Republican who authored the bill in the Senate, cheered its advancement in the House and waved at the possibility of a deal on the bill.

“We are working together in this process and trust that the final product of SB7 will be a great collaborative piece of legislation that makes it easy to vote and hard to cheat,” Hughes said.

Disclosure: Dell, Greater Houston Partnership and Microsoft have been financial supporters of The Texas Tribune, a nonprofit, nonpartisan news organization that is funded in part by donations from members, foundations and corporate sponsors. Financial supporters play no role in the Tribune's journalism. Find a complete list of them here.