This week, the priority bills for the state's top leaders advanced, but there is still work to be done to get them to the governor's desk. 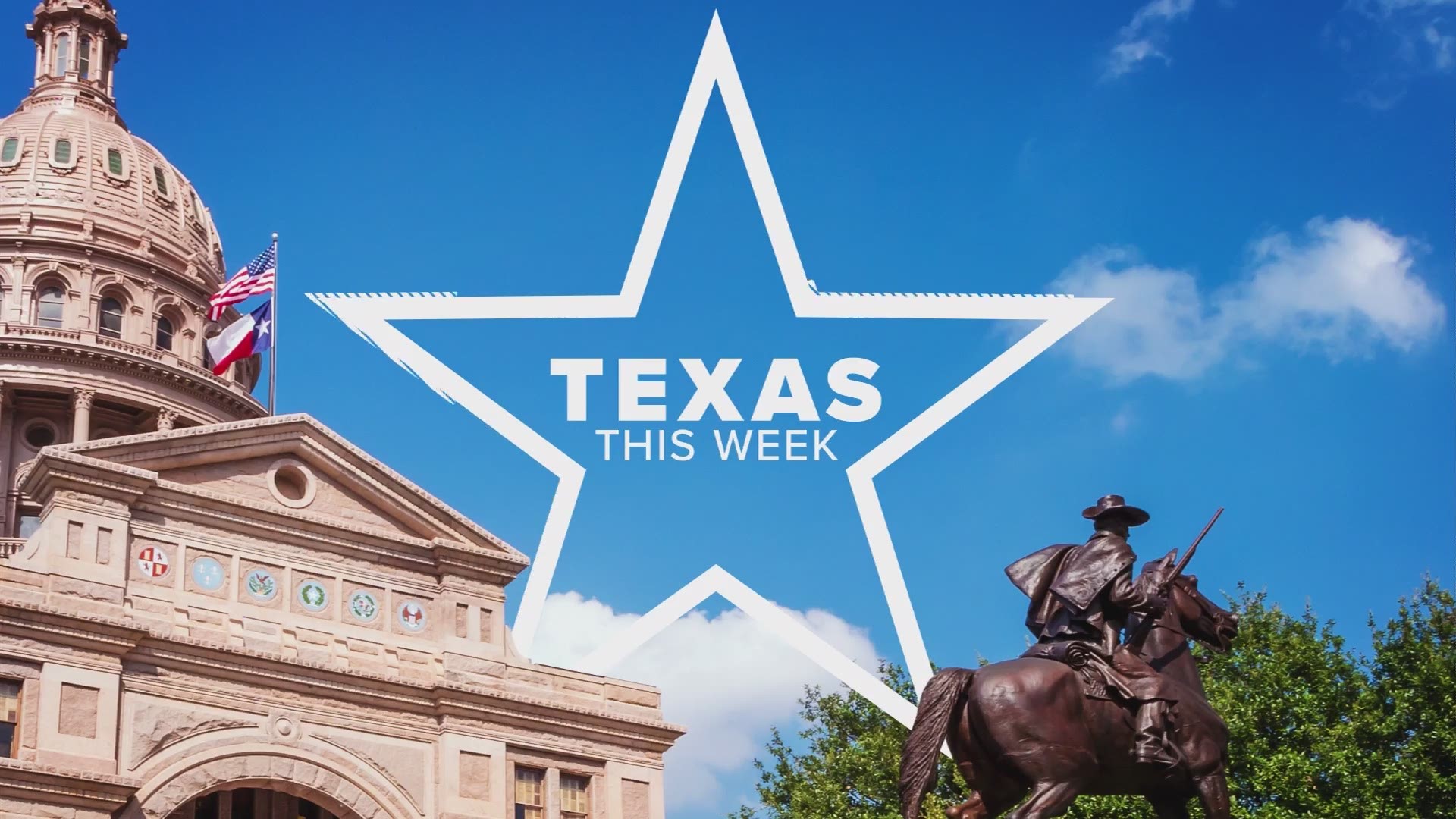 Senate Bill 2 (SB 2), the property tax reform bill, was voted out of the House this past week. While there are some differences between the Senate and House versions, one big thing remains the same -- the rollback rate for cities and counties. The rollback rate is how much taxing entities can increase your property taxes without the possibility of an election. Currently it's 8 percent and even then it would take a citizen petition to force an election. SB 2 makes it 3.5 percent, and if cities or counties try to raise it by more than that it automatically triggers an election.

The House did make a significant change when it passed SB 2; it amended the bill so that if House Bill 3 (HB 3), the school finance reform bill, doesn't pass, SB 2 won't go into effect. Because of this and the House deadlines approaching, the Senate Committee on Education voted HB 3 out of committee this past week and the full Senate plans to pass it Monday. But as the committee substitute is currently written, the bill has some major holes, mainly that it's not funded.

Friday, the Big 3 called a news conference to push the bill they say will actually reduce your property tax bill -- the tax swap. The governor, lieutenant governor and speaker of the House want to increase the sales tax by 1 cent and use that money to buy down your property taxes. Governor Greg Abbott argues this will help all Texans, even those who don't own a home, because they pay property taxes through rent and so do businesses that lease space.

Executive editor and co-founder of the Texas Tribune Ross Ramsey sat down with Ashley Goudeau to explain what it will take these three priority bills passed.

Ashley Goudeau: This week is going to be a big week.

Ross Ramsey: "Yeah, the dates start to fall. I've got this big calendar on my wall. It's got red dates around it that's put together. Monday is the last day that a House bill can go through what they call the substantive committee. That's where it gets its hearings and people testify and everything. Tuesday's the last day it can get put on the calendar by the Calendars Committee. So if it's not, at the end of Tuesday if it's not on the House's agenda, it's not going to be on the House's agenda. And then Thursday is the last day a House bill or a constitutional amendment that started in the House can get a hearing on the floor of the House. So that's the one that goes to midnight that you, you know, we stay up there every year and watch 'til midnight. And a bunch of bills die at that point. So they're all rushing over this weekend and into the week for their last chance to, last best chance on their bills."

Goudeau: Some people may not understand why the House works this way. If there's a few weeks left, why would they put the end of the bills at this point?

Ramsey: "Well they do this because you get sort of a bottleneck. You know, you have a 20-week session, you file all these bills. This time they filed more than 7,200 bills and you have to manage that so that they don't all come due on the last day. And so you get this slow, ratcheting down that really begins in earnest at the first of May and that's where we are."

Goudeau: While a lot of bills have passed and are making it through the process, the big bills, the top priority bills, have not passed yet. And that includes the number one bill that they have to pass, which is the budget.

Ramsey: "Right. So they've got the budget out of the Senate, out of the House and it's in the hands of the committee that's trying to reconcile the differences. That's called a conference committee. It's five members from the House, five from the Senate. They sit down, they hash it out. It's on schedule believe it or not. The next big bill is the governor, the lieutenant governor and the speaker came out at the beginning of the session and had that big kumbaya news conference at the mansion and said our priorities are school finance and property taxes. And that comprises two or three bills that are all still in motion and are probably going to be OK, but everybody's getting nervous about them. We're here at the end, the big things haven't been done yet, but they're all moving. And after we get to this time next week, we'll have a pretty good idea where the education bill is, where the bill that requires voter approval for property tax hikes is and whether there's going to be a property tax cut or not and how we're going to pay for it."

Ashley Goudeau: There's some really big differences between House and Senate versions on these bills. So let's start by talking about Senate Bill 2. That is the bill to reduce the rollback rate, which is how much your property taxes can be raised without an election, without voter approval. The House version versus the Senate version.

Goudeau: On the Senate side of this they excluded money for indigent defense.

Ramsey: "Right, there's some small differences in here and you know they'll wrangle those out."

Goudeau: The other big bill is House Bill 3. That's the school finance reform bill, and it was passed sort of early, we'll say, from the House. The Senate Committee rushed it this week out again because we've got all these deadlines.

Goudeau: And they voted out, the committee voted out a version of this bill that's incomplete.

Ramsey: "Right and that is really, really expensive. They just threw everything in so the House bill came out and would cost about $9.5 somewhere, billion. The Senate bill is $15.5 billion. They just threw everything in. They've got a $5,000-a-year teacher pay raises in there; they've got a huge property tax cut; they've got this and that and the other thing. And then they've got, down inside the really important parts of the bill, the approaches of the Senate and the House on education and education funding are a little bit different. They've got a long negotiation there, or a tough negotiation there."

Goudeau: That negotiation, first it's going to happen Monday when the Senate is expected to take this bill up and I really would love to hear your thoughts on this, do you feel like a majority of the Senate would be willing to pass a bill that they know is incomplete just so they can get it to committee so they can complete it?

Ramsey: "That's really the test. Larry Taylor is the Senate Education Committee Chairman. He took it to his committee last week and said basically, 'This bill is not what I want; it's not what you want. It's not what any of us want, but pass it anyway. Get it to the full Senate. If we can get it out of the full Senate and get it to the negotiations, I'll take care of everybody.' And so it's a faith vote. I mean everybody's just like I hope you do me right on this thing."

Goudeau: And the big thing that we're talking about is how to pay for some of these property tax cuts. That comes in a few different forms over in the House.

Ramsey: "Right. It costs an enormous amount of money to cut school property taxes enough for you to notice it. Right. It's, if I want to cut a dime off of school property tax rates across the state, the State has to spend about $2.7 billion. So they've proposed raising taxes, raising the sales tax or some other tax enough to raise about $5 billion to cut it somewhere between 15 and 20 cents, right. So we're going to raise this tax and we're going to lower this tax. But a lot of Republicans don't want to raise sales taxes. A lot of Democrats really hate sales taxes because they're harder on poor people, they're a regressive tax. And so they're having a conversation about if you did a swap, the governor, the lieutenant governor and the speaker have all endorsed, you know it's a penny sales tax increase, it's a 15-20 cent property tax decrease ... So the first way they proposed this is let's do a constitutional amendment. We'll hand it to the voters, the voters can go to the polls in November and say, 'Yes, I will raise my sales tax a penny to lower my property taxes,' or 'No I won't!' That's way number one. You don't have to go to a constitutional amendment. You can vote straight up in the House and the Senate. The difference here is to get a constitutional amendment through you have to two-thirds, 100 House members, 21 Senate members. And they don't have them. So you could do it with a smaller vote, 76 in the House, 16 in the Senate but then everybody's got to vote and they've got to vote to bust the spending cap and do a bunch of other things they don't want to do. They're afraid they'll be on the hook for a tax increase. They're really just looking for some way to raise taxes without voters getting angry at them and forgetting that they also did a tax break as part of the tax increase. And you know they're fretting over that and they're going to be fretting over now in a deadline period."

This week, Ashley discusses the deadlines approaching the House of Representatives.