The March primary election will be here before you know it and several of those races are expected to be tight and lead to run offs, including the race for House District 46. Six people are challenging incumbent Dawnna Dukes (D-Austin) in the primary. In Texas This Week, we are beginning a series of interviews with candidates, starting with Chito Vela. 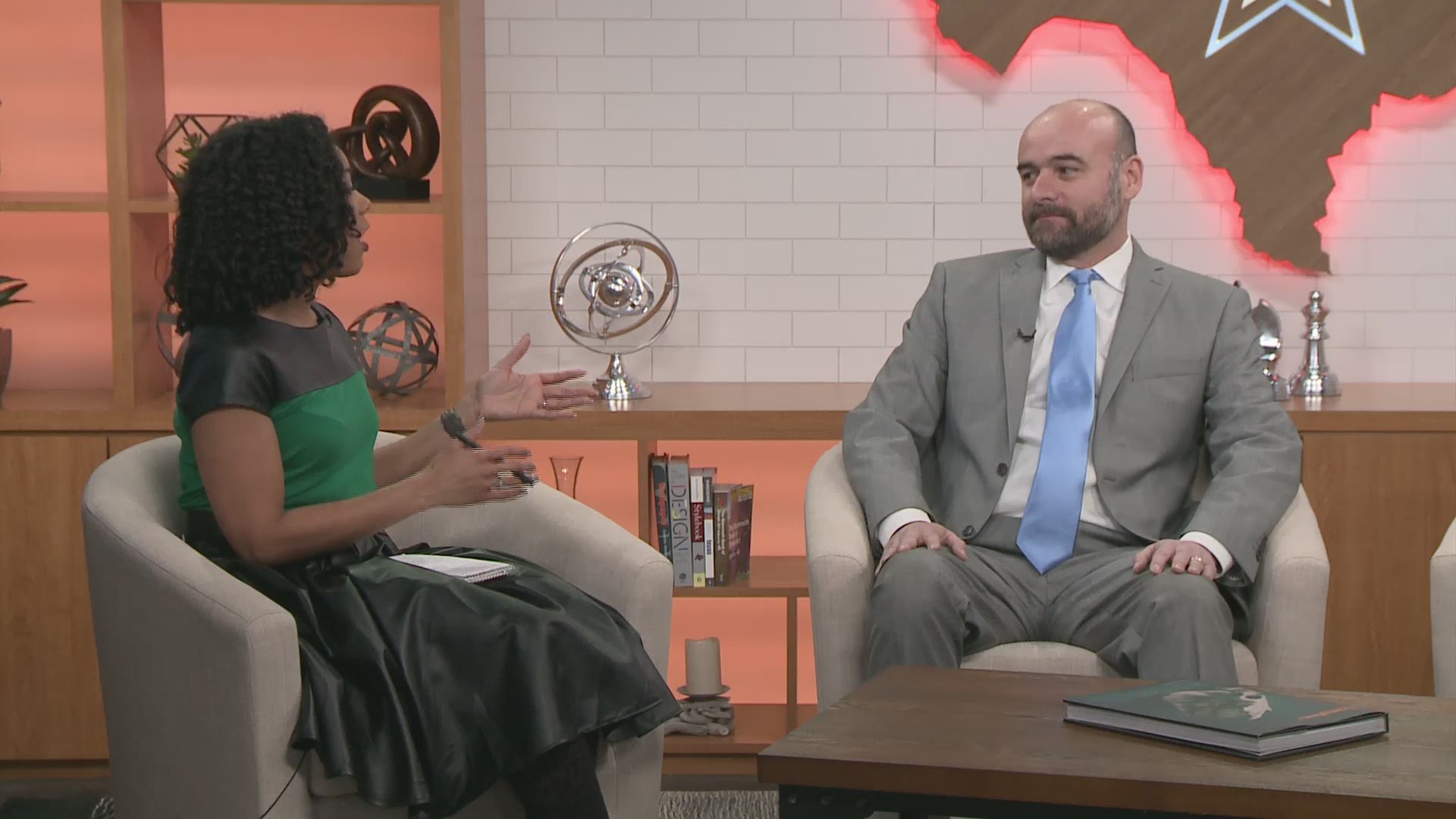 Austin attorney Chito Vela wants to go from fighting in the courtroom to fighting at the capitol.

He sat down with Ashley Goudeau to discuss his campaign.

Ashley: Mr. Vela, tell our viewers a little bit about yourself and why you're running for this district seat.

Chito Vela: "Well I'm an immigration and criminal defense attorney here in Austin in a lot of asylum cases, most of the people that I represent are immigrants, lots of undocumented immigrants. I am a former General Counsel to a former State Representative at the Capitol. So I know the Capitol. I know the Texas House. I know the games. I know how they're played. And the seat, it's a great district. It's a very working class district. It's a very diverse district and it's the kind of district that you can have a real Democratic Party champion. A standard-bearer, a fighter. Someone that'll be the tip of the spear and really an advocate for democratic policies and someone that can help push the state to the left. And it's a unique opportunity and I want whoever represents House District 46 to be that kind of person, to be that kind of leader for the democratic party."

Ashley: You've never run for office before, so why did you chose this seat and to run right now?

Chito: "Well one of the reasons, and this is going back to when we initially thought the election was going to happen in November of 2016, right after the Trump election, was President Trump. And President Obama's message of 'if you're frustrated with the system, if you're not happy with your government then', he said, 'strap up your shoes, get your clipboard and run for office.' And that's what I did. And again, the district, I'm a liberal democrat, the district is full of liberal democrats. It's a district that my views and my politics very closely match those of the folks in the district, very pro-working class, very defending marginalized groups. That kind of, my politics, I wouldn't have to compromise anything, I could just be who I am. I could be an advocate, I could be a fighter, I could be a champion and it's a very good match."

Ashley: You mentioned, 'back when we thought the election was going to happen the first time.' For our viewers, Rep. Dawnna Dukes announced that she would resign, and then decided to remain in her seat. And you announced back then when you thought she was going to resign. And you have decided to challenge her in the primary. Why?

Chito: "Rep. Dukes has not been providing effective representation to the district for a number of years at this point. And we in the district need effective representation. She had the worst attendance record in the Capitol this last session, and I'm not confident that she will be able to effectively represent the district in 2019, during the next session. So, whatever happens, we need to have somebody in that seat that's going to be present; that's going to be there for the constituents when they have problems, and that's going to be there pushing back against this very conservative Texas Legislature, trying to stop some of the bad Republican bills and trying to push the state back to the left."

Ashley: In addition to facing Representative Dukes in this primary, you're also facing former Austin Mayor Pro-Tem Sheryl Cole. Why should our viewers vote for you over either of those two candidates?

Chito: "I have the passion, the energy, the experience at the Texas Capitol. The knowledge of the legislative process that, that, Sheryl Cole does not have that really. I don't think any of the other challengers have. And as a Democrat, we have lost all power in the state. We don't have any statewide elected officials. We don't control the Texas House or the Texas Senate. On the national level, we don't control the presidency, the House or the Senate. Democrats need to change direction. We can't just have the same recycled candidates with the same tired messages and expect a different result and expect the party to grow and to take power. We need to let the next generation come in and pick up the fight. There are people ready to go but we need to make space for them. We need to move the party to the left and we need to embrace the progressive energy that the left wing has right now. There are lots of grassroots groups that are ready to fight that are chomping at the bit and that's where I come from. I'm an activist. I was the President of the Worker's Defense project. I was the President of my PTA at my kid's elementary school. I'm deeply connected to the grassroots in the district. I want to represent the people and that's the goal. That's why I think I'm the best candidate to represent House District 46 in the legislature."

Ashley: Let's talk about some of the issues people living in House District 46 are facing. I think when you go out and chat with people the number one concern they have is about their property taxes. What are your thoughts on how we reform the property tax system or is there another solution, you think, to impact and lower property taxes?

Chito: "That is affordability, housing affordability I think is the number one concern in the district. And increasing property taxes have been a result of the State of Texas not adequately funding the education system. So because the state is not stepping up to the plate and providing sufficient educational funds, the school districts have been forced to continuously raise property taxes and

you see homeowners really pinched. And property owners in general really pinched. We need additional, new revenues for the state, and one of my proposals is the legalization of marijuana and the taxation of it with those funds dedicated toward education funding. Multiple states now have done that and have seen substantial revenues coming into the system. And we have to be creative about that. Texas is a low tax state, I don't think we're going to get away from that. But we, if we want to properly fund education, we have to be creative about that. We have to look at something like the legalization and taxation of marijuana, potential other sources of revenue to make sure that we are providing a quality education to our public school children."

Ashley: Another big issue that people in our area deal with is the traffic. And of course, there was a lot of talk about tolling I-35 at one point, that no longer is on the table. What are your thoughts on how we improve the infrastructure in Texas?

Chito: "One of my proposals is to allow cities in Texas to levy a gas tax. I would like to see the legislature pass a bill allowing a city, upon an election, to allow let's say a nickel or so on the local gas tax. And then the City of Austin or whatever locality could then use those funds for transportation needs but broadly defined: not just investment in highways and roads, but also investment in public transit, public sidewalks, investment in bike lanes. We would leave that up to the city council, but we need to give cities the funding mechanisms that they, so that they have the flexibility to make the investments in transportation infrastructure. They're so badly needed, not just in Austin but in cities all over the state. In major cities all over the state."

Ashley: Even if that were to happen that still wouldn't improve the major highways that are under TxDOT's purview. So what about those roads?

Chito: "Again, the funding is the real question. There was a plan floated not too long ago that involved burying I-35 and I fully support that. I-35 has divided our community for too long and the double deck structure just doesn't seem to work in Austin today in the modern era. And I do think that we need to go ahead and make that investment and bury the highway, reconnect the city and hopefully that would help traffic flow through I-35. And also that would help reconnect the street grid on the surface there. Getting east and west in Austin is also very difficult and if we can eliminate the huge barrier that I-35 is, I think that'll help traffic flow a little bit better through the central core of Austin."

Ashley: If you were watching this past legislative session and the special session, it was very obvious to everyone that things were contentious. And the parties weren't necessarily working together on those issues that impact all Texans. What is your thought process and your plan, if elected, to try to work with people on the other side of the aisle?

Chito: "There are many issues that could potentially unite urban democrats and rural republicans in particular: one of them is Medicaid expansion. President Obama through the Affordable Care Act gave states the ability to expand Medicaid, but Texas has unfortunately declined to expand Medicaid. And that means about 900,000 Texans, working class Texans, are not getting the Medicaid coverage that they should. This hurts urban areas but this also hurts rural areas. There are rural Republicans that are seeing hospitals in their areas close. Where women have to drive an hour and a half, two hours to give birth. So, they know that we need better health insurance coverage, that we need expanded Medicaid. I would immediately reach out to them and try to find that common interest. Education is another area. Rural schools are really, really struggling right now. They don't have the property tax base and they're -- you've heard of bands being cut and different classes being cut at rural schools. So again, that's an area where we as urban Democrats want better education funding. Rural areas also want better education funding. We need to come together and find those additional sources of revenue so that we have an adequate, equality public education system. And again, I think there's common ground there. I know that the rural Republicans, that the urban Democrats and rural Republicans are not going to agree on guns and abortion, but in education and healthcare I see more and more common interests between urban Democrats and rural Republicans."

Ashley: Do you have any final thoughts for our viewers?

Chito: "Excited about the race. It's been a pleasure campaigning, knocking on doors, getting to know people in the district. And again, it's an opportunity. I don't want to see the seat go to someone that is not going to be a champion, a liberal lion in the Texas House. House District 46 could very well be the most liberal district in the state. And we have an opportunity to put somebody in there who's an advocate and a fighter and a champion for the Democratic party and for liberal Democrats all over the state. That's what I want to do, that's why I'm running for the seat."