Eckhardt resigned from her position as Travis County Judge to run for the seat vacated by former State Sen. Kirk Watson. 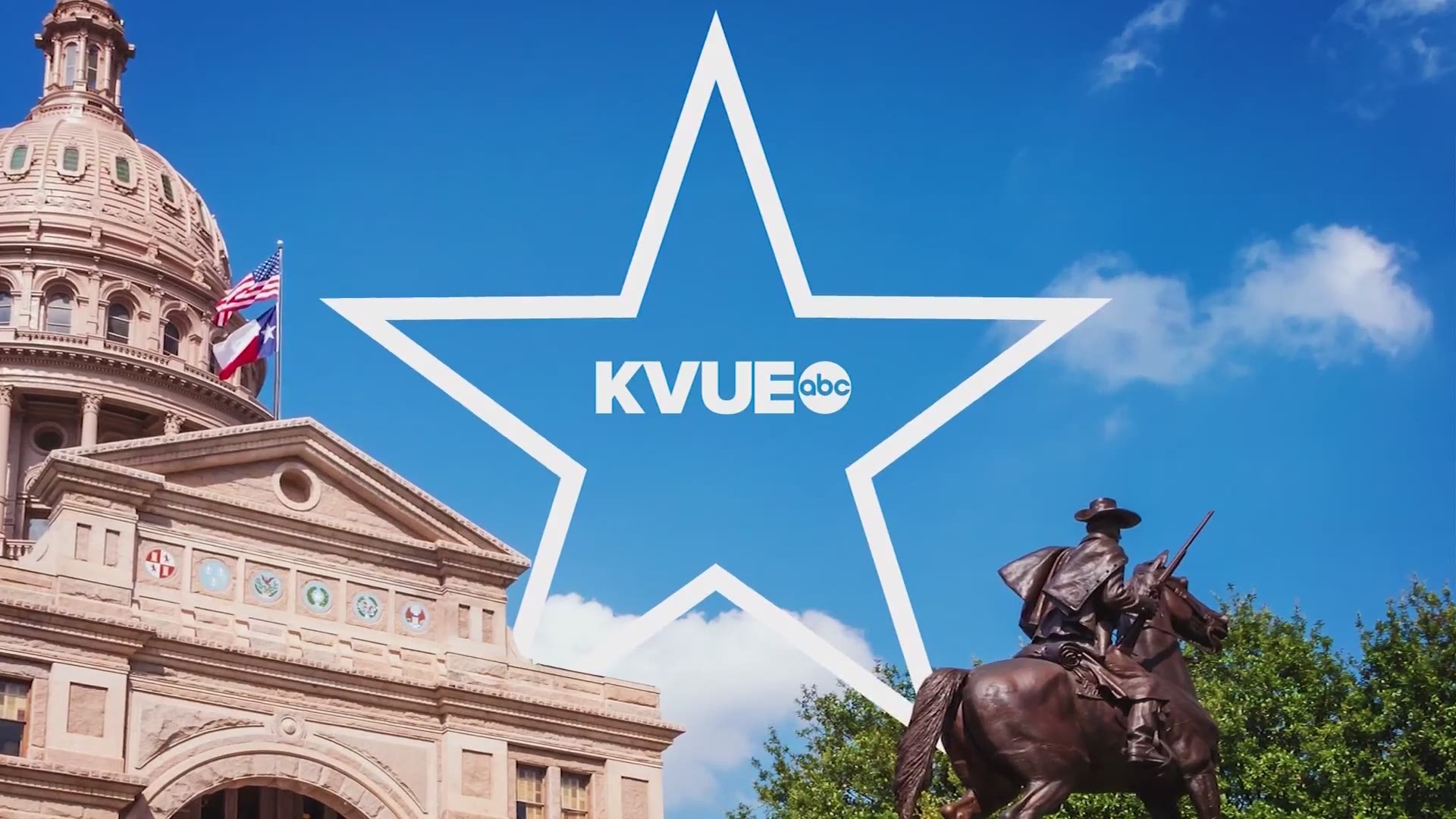 AUSTIN, Texas — Texans are one week away from the start of early voting, the number of new COVID-19 cases has reached an all-time high and local leaders discovered they do have the power to enforce mask-wearing.

The number of new COVID-19 cases and hospitalizations continued to increase in Texas this week, setting new record highs. Gov. Greg Abbott held a news conference Tuesday, assuring Texans there is enough hospital capacity to treat patients. And as the state continues to reopen, he's urging people to take steps to slow the spread of the virus.

Meanwhile, a Bexar County judge seemingly cracked the governor's mask code. Mayors from nine Texas cities sent a letter to Abbott, asking him to allow them to require people to wear masks in public. The Governor's Office responded, appearing to chastise the leaders, saying no local official in Texas had implemented the tools the governor is allowing.

Bexar County Judge Nelson Wolff figured out the mystery and was the first to require businesses to make employees and customers wear masks inside. Other municipalities, including Austin and Travis County, have followed suit.

Texas students will head back to the classroom this fall. Abbott broke the news to lawmakers on a conference call Thursday. Leaders at the Texas Education Agency say they've worked on a plan for students to return to campuses for months, and the agency plans to release guidelines for schools next week.

The July election is quickly approaching. In addition to the primary runoff races, Travis and Bastrop County voters will select a new state senator after Kirk Watson resigned to become the founding dean of the Hobby School of Public Affairs at the University of Houston.

There are six candidates vying for the job, including former Travis County Judge Sarah Eckhardt. Eckhardt sat down with KVUE Political Anchor Ashley Goudeau to discuss her campaign.

Ashley Goudeau: A lot of our viewers are familiar with you because, in 2015, you became the first woman elected as Travis County Judge. But tell us a little bit more about your professional background.

Sarah Eckhardt: "Sure. I have taught at the University of Texas. I'm a lawyer. I've got a Master's in public affairs. I was a prosecutor at the county attorney's office for a while. And then I was on the commissioners court representing Precinct 2. And then I ran for county judge and succeeded to that spot about five years ago. And it's been just a great job."

Goudeau:  And so why are you running to represent District 14 in the State Senate?

Eckhardt: "Well, I will tell you that my work has really taken me to a place of collaboration in a five-county region in Central Texas that includes, of course, Bastrop and Travis Counties. It's really a microcosm of the entire state. We have urban, suburban and rural areas. We have a democratic core, but as you get further out, it becomes more conservative. And we're also shot through with a healthy streak of independents and libertarianism as well. So what works here can really be scaled to the state level. And I think that we have experienced collaborative leadership here that's really produced good government. And I'd like to take that to the state. "

Goudeau: You were re-elected to your second four-year term as judge in 2018, but you made the decision to step down to run for this seat as COVID-19 was really starting to become a reality for us here in the United States. So, how do you respond to people who say you put your own political ambitions above your duty as [a] judge?

Eckhardt: "It's actually the reverse. What we're seeing in the COVID-19 pandemic, both from a health care perspective and from an economic perspective, we're performing well at the local level. Where we really need a much more deeper commitment and sustained attention is at the State level. So, I continue to work with the team in Travis County, in Central Texas."

Goudeau: Let's talk a little bit about the work that you are continuing to do. So, you did resign as Travis County judge, but you've remained on with the county as a special assistant to the judge. That's something that your opponents – Rep. Eddie Rodriguez recently criticized you for saying that, you know, it's inappropriate for you to be campaigning while speaking on behalf of Travis County. What's your response to that?

Eckhardt: "I think that my opponent has complained about me going and has complained about me staying. And so, I think that there could be only one explanation for arguing both, which is political. But I will tell you, I will, I'm a public servant for life. I will do this kind of work whether I have [a] title or salary or not. And so, if I lose a Senate race because I am responding to my community in a pandemic, I will sleep well at night."

Goudeau: The 2021 Texas Legislative Session promises to be interesting and likely contentious. Not only will lawmakers be trying to build a budget with a budget deficit, [but] it is a redistricting year. So, talk to us about how you will navigate this if you're elected to the Senate and what skills you bring to the table that will be able to help you through this.

Eckhardt: "Sure. In the mid-decennial redistricting in 2005, as well as the redistricting in 2011, the Travis County Commissioners Court joined suit. I was actually the deciding vote in our joining after the 2005 redistricting. We have been engaged in [a] lawsuit over redistricting for many, many years now. And so, irrespective of whose name is on the lawsuit, it's actually counties and cities and nonprofits who have taken that vote all the way, those decisions, all the way the Supreme Court. Until we have an independent, a truly independent and transparent redistricting process at the State level, irrespective of whether there are Republicans in charge or Democrats in charge, we will not have a fair process. So, as a lawyer, I will make a very good record in the Senate. The numbers are not good for us to get fairness in redistricting this year, but by making the good record, I hope to pass that good record on to an even better lawyer than myself to argue it successfully in the courts."

Goudeau: And so, do you see yourself writing legislation then to try to come up within an institute, this independent redistricting body?

Goudeau: Talk to us about the types of legislation that will be your main priority if you are elected to the State Senate.

Eckhardt: "The major priorities at this point are recovering our health and our economy from COVID-19. This is – this is a devastating pandemic. So, that is priority one, but running right parallel to it – so I really couldn't call it a priority one, it has to be a parallel – is criminal justice reform, which I've been engaged in for the last 20 years. It requires sustained attention and truly systemic reforms to de-federalize and to demilitarize our police, to move our investments over to mental health care and health care generally, and also to have independent investigation and prosecution of police officers who commit crimes against the people that they're sworn to protect.

And then also, we need to address climate change. We have to ask some hard questions and make some hard decisions so that we can provide hope to the future generations. Without addressing it, we are – we're leaving them in a hopeless state.

And then also we are going to need to have some adult conversations about how and who bears the burden of taxation in the state. Our funding mechanisms at the State level are – invents the structural imbalance that makes it virtually impossible for the State to meet its obligations to educate and provide health care to the whole state. And that's the reason why we see locals picking up more and more of the tab. So, we have some big challenges ahead. And those big challenges require sustained attention and looking for the solutions outside the pink dome and bringing them into the pink dome."

Goudeau: With six candidates on the ballot, why should our viewers cast their vote for you?

Eckhardt: "Well, I think that [State] Sen. Watson really set a bar. And he was the mayor of the City of Austin before he went to the Senate, and I think that kind of skill set and that kind of experience are what is really needed in the State Senate today. I think we need people who have had a firsthand experience of collaborative leadership that actually produced good government so that we can duplicate that at the State level. I know what happens to a bill when it hits the ground. Does it hit the ground running? Does it hit the ground stumbling or, worse yet, does it hit the ground and roll back progress that we've made at the local level? So, I look forward to taking that kind of perspective up to the Senate so that I can help folks do good and not just look good. Nobody goes to the Texas Senate not seeking to serve, and I want to help in my service."