This is the first time Sen. Sanders has taken the top spot in the University of Texas and Texas Tribune poll. 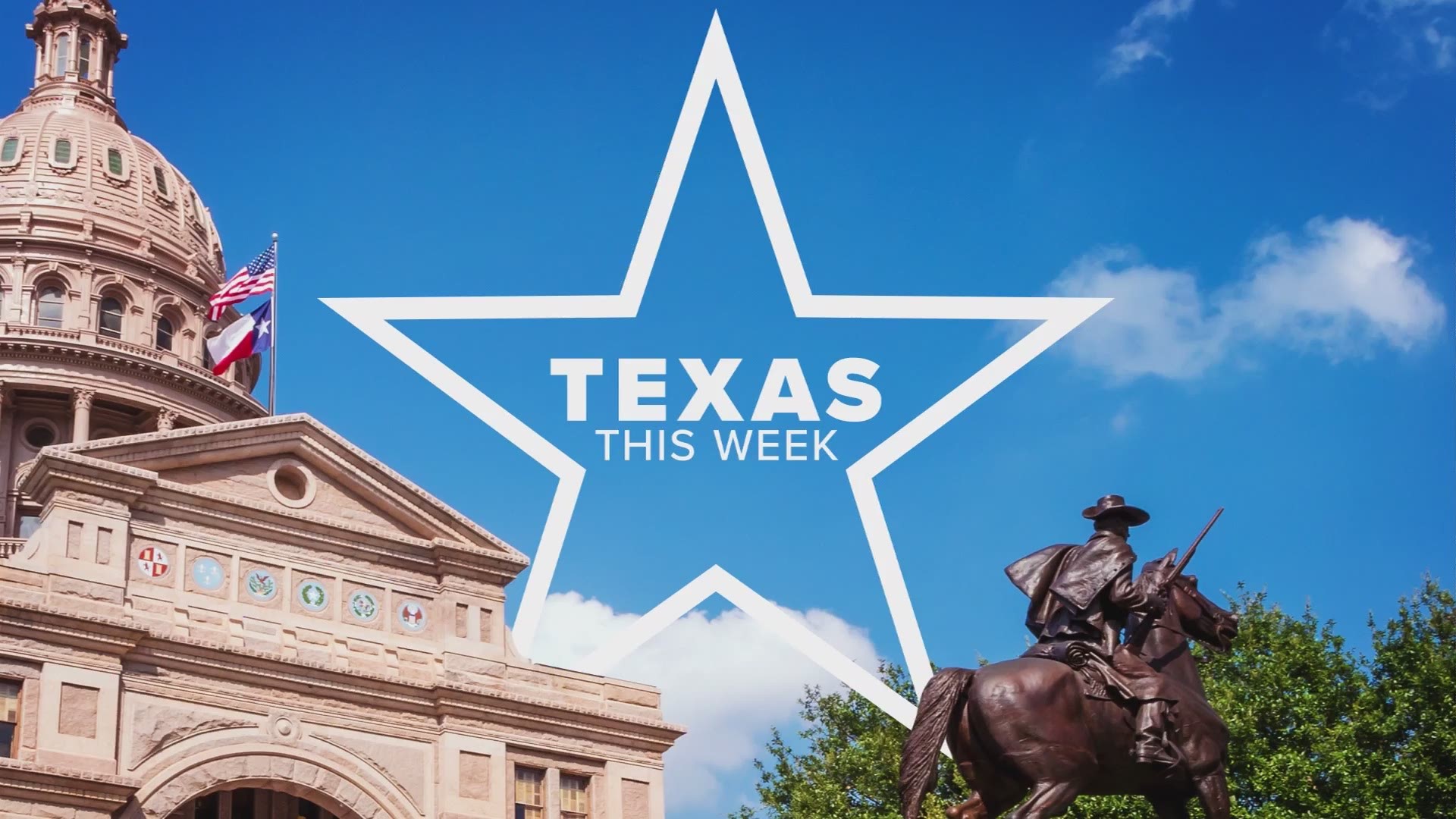 AUSTIN, Texas — Early voting in the March Primary election begins Tuesday, a new Democratic Presidential candidate is taking the lead among voters and the state of Texas is suing California. Let's get to the three things you need to know in Texas politics.

Texas Attorney General Ken Paxton is asking the Supreme Court to strike down the Sunshine State's travel ban on Texas. California lawmakers banned state-funded travel to the Lone Star State because of a law the Texas Legislature passed back in 2017. House Bill 3859 allows faith-based foster care and adoption agencies to turn down potential parents based on the organization's religious beliefs. Paxton says this is a violation of the First Amendment's protection of religious liberty.

The Democrats running for president are making big investments in Texas ahead of Super Tuesday. Sen. Bernie Sanders is opening offices in San Antonio and Dallas, Pete Buttigieg is adding staffers in Texas and hosting welcome parties for them across the state and Mike Bloomberg was campaigning in Texas this week. Bloomberg earned the endorsement of Houston Mayor Sylvester Turner and launched his "Mike for Black America" tour.

A new statewide poll by the University of Texas and Texas Tribune shows there's a new front runner among the Democrats running for President. Sen. Sanders is in the lead with Democratic voters for the first time. When asked who would they vote for in the primary election, 24% of self-identified Democrats say they're backing Sanders. Former Vice President Joe Biden is close behind with 22% followed by Senator Elizabeth Warren in third and Mike Bloomberg in fourth.

We often report on polls, but what's the meaning behind these numbers? Jim Henson, Ph.D., director of the Texas Politics Project at the University of Texas, which conducted this latest poll, sat down with KVUE's Ashley Goudeau to discuss what these numbers really show us about the Democratic Presidential Primary.

Jim Henson, Ph.D.: "Yeah, you know, it's a, it's a real challenge this time of year because there's just so much going on and you're trying to just, you know, take, you know, the best sample you can and get it, you know, kind of get a dip out of the stream and take a drink of it, knowing that the streams running pretty fast. So we didn't want to be in the field once people start early voting because that's a little bit problematic. We knew that there was no way to avoid all the primaries. So this poll was in the field from Jan. 31 to Feb. 9. So we caught, we were in the field while the Iowa caucuses were happening, got the impact of that while President Trump's trial was going on and concluding in the Senate, but then we came out of the field two days before New Hampshire."

Goudeau: So let's chat a little bit about some of those findings, particularly when we look at the Democrats who are running for President. I think this is a little surprising that you found among Democratic voters, people who identified as Democrats, Sen. Bernie Sanders came out on top.

Henson: "Yeah, I mean, you know we were talking about the flow of things and I think these results capture a moment that we're at right now, which is, Sen. Sanders is solidifying his support, it would seem, among the progressive wing of the Democratic Party. So as you suggest at 24 points, he was leading the pack and he increased from 12, you know, from 12 to 24, compared to our October poll. So I think that as young people begin to pay more attention, as other candidates drop out of the race, and as people turn their attention, Sanders' support is solidified and he's benefiting from the fact that Joe Biden, who up to this point had been what we would call a weak front runner just as Sanders is, you know his support in Texas has flattened. He lost a point since October. That's about the same. But what we've seen as Sanders has solidified his support, is that, you know, Joe Biden has been a little bit exposed. The weaknesses in his candidacy have become more apparent, and of course, he's been under a pretty sustained attack by Donald Trump and by the President's allies. This was really part of the subject of the impeachment proceedings. And I think it's it's hard to look at where Biden is and not find that, to some degree, that's had an impact. Now I think Biden had unappreciated weaknesses as a candidate, but the Trump assault on Biden's candidacy, to some degree, has kind of worked."

Goudeau: In your latest poll, former Vice President Biden came in in second place, though. And he's in that margin of error. So him and Sen. Sanders are pretty close.

Henson: "Yeah, he's, you know, they're still leading, but I mean, I think that the problem here for both of them really, is that nobody's been able to grow their support in Texas. And there's going to be a lot of attention paid Texas and it would be a big advantage for either one of them if they had been able to take the extent of name recognition and their records, and the fact that Democrats knew who both of these candidates were, and built on that going into the primary that's, you know, getting pretty close."

Goudeau: Especially since there are fewer candidates in the race now, right?

Henson: "There are fewer, but for you know, where we are at this point, there's still a lot. I mean, if you look at our overall results, we still you know, we had Elizabeth Warren, you know, still in double digits. And Michael Bloomberg has been a real wild card we had Bloomberg at 10 points, which is a real interesting comment on how somebody that's not been in any of the debates, is reasonably well known, but still from a different part of the country, can use the conjunction of practically unlimited resources, Bloomberg is committed to spending as much money as he can. And, you know, a smart media strategy. I mean they've run a solid, well-staffed campaign and it shows he's vaulted over all these people that are in single digits that have been in this race for months."

Goudeau: I thought that it was interesting that there is quite a sizable difference between where Sen. Sanders and Biden are compared to Sen. Elizabeth Warren. I mean, that's kind of where we break up in the big three and she just got 15 points compared to 22 and 24.

Henson: Yeah, I mean, you know, again, we talked about the arcs of these candidacies and I think that we're capturing a difficult period for Elizabeth Warren. I think there are a lot of different possible actually explanations for this. You know, frankly, I think you can't explain it completely without considering gender a little bit. But she has also had some difficulties in the way that she moved on her health care positions. And that probably sent some people in the progressive wing for whom health care is a very important issue and who are committed to universal health care quickly back and Bernie Sanders direction."

Goudeau: You know, there's something else that you guys asked in this poll that I found to be really interesting. And I feel like we tend to get in these bubbles where we think people are most concerned about their party and their party alliances. But most people would actually rather see politicians work together. Is that a fair way to say that?

Henson: "Well to some degree, I mean, you know, I think that's right, with a little bit of an asterisk. Most people in a literal sense, but we asked the question, where you know, that asked people essentially, if you're, if politicians are in the face of a political or a policy conflict, would you rather that they compromise to get something done? Or would you rather they stand on principle? And what we found is 56% said, compromise; 44% said stand on principle. So that's a majority, but it's pretty closely divided. And if you drill down in that what you find is that about 63% of Democrats and about the same amount of Independents prefer that people compromise. About, you know, 46%, only about 46% of Republicans say compromise. Now, those are not stark differences, but I think what you do see there is that the Democrats right now have a much more heterogeneous party, they have a lot of different blocks. They're used to having a compromise among themselves, even though we're seeing conflict over that process right now. You know, the Republican Party at this point in history is much more homogeneous. It's ethnically and racially more homogeneous. And it's regionally, in terms of where people live, more homogeneous. And there's also something about it being the more conservative party that is a little bit more focused on adhering to principles rather than compromise. So there's an interesting dynamic out there, but it's, there's not a consensus that people ought to compromise at this point."

RELATED: Early voting guide: Where and how to vote in Central Texas

While the Presidential race is getting a lot of attention, the biggest statewide race is for the U.S. Senate. A dozen Democrats are running to challenge Republican Sen. John Cornyn. You can hear what the candidates have to offer yourself.

On Tuesday, Feb. 18, KVUE News is partnering with KUT and the Texas Tribune to host a live debate with the candidates. You can watch it on KVUE or KVUE.com starting at 6:30 pm.

These roads will be closed for the 2020 Austin Marathon