A U.S. federal judge ruled the State of Texas is violating the National Voter Registration Act by not allowing Texans to register to vote when they renew their driver's licenses online. 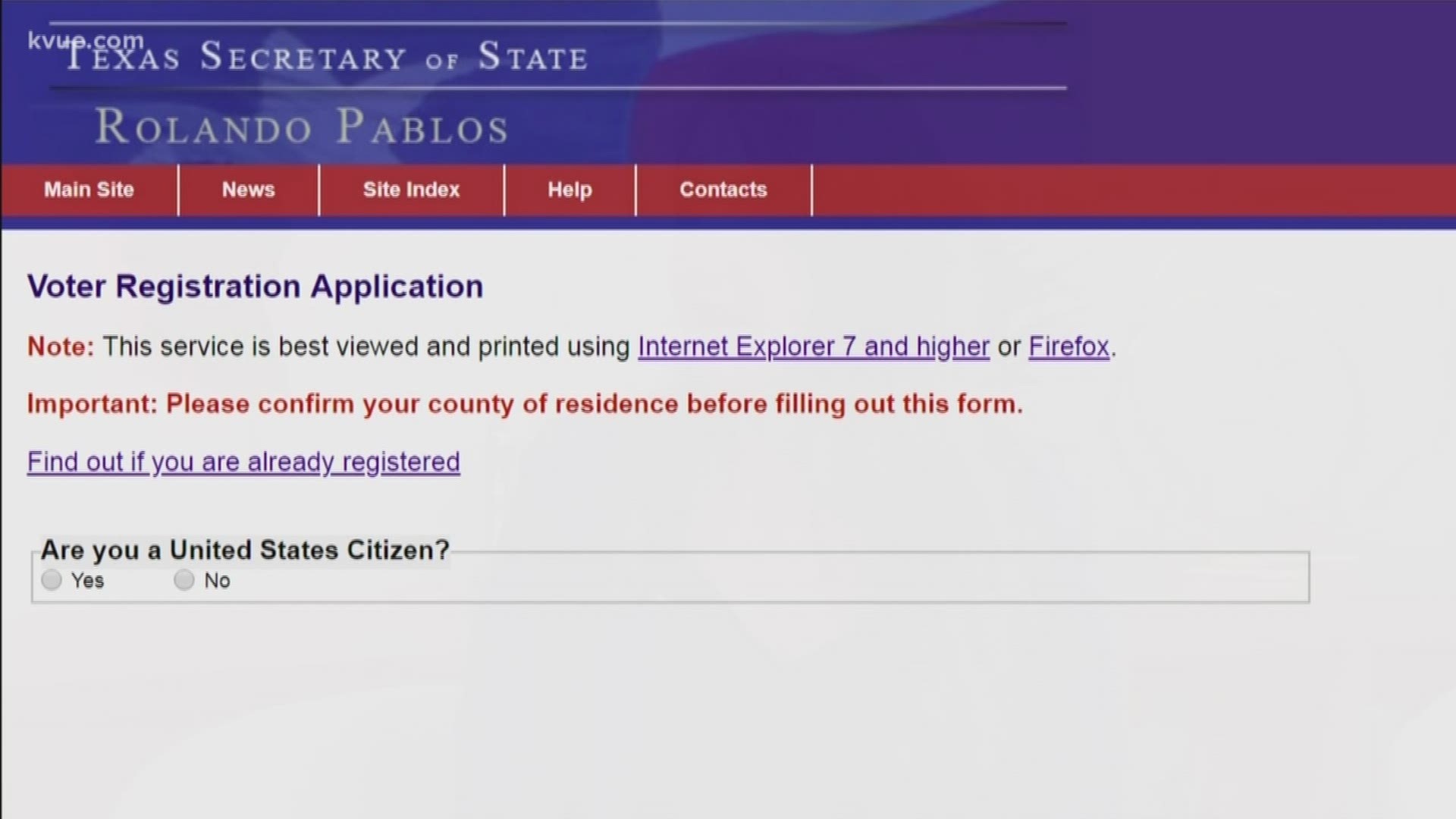 In Texas This Week, Ashley Goudeau sits down with The Texas Tribune Reporter Emma Platoff to discuss the case.

Ashley Goudeau: First and foremost, tell us about the lawsuit the Texas Civil Rights Project filed against the state.

Emma Platoff: So the Texas Civil Rights Project sued the State of Texas in 2016, arguing Texas wasn't complying with the federal law, the National Voter Registration Act, which says basically that when you are applying for or renewing a driver's license, you can register to vote at the same time.

Goudeu: What exactly was the problem then for the Texas Civil Rights Project?

Platoff: The problem in Texas is that while you can renew your driver's license online, you cannot register to vote online. And the Civil Rights Project claims that this caused a lot of confusion. Voters thought they were registered but they weren't and they showed up to the polls and they couldn't vote. And they argued also that this violated this federal law, which stems back to 1993.

Goudeau: Explain to us exactly what you see when you are online because the state said, "not so fast, we do offer an option."

Platoff: Basically what happens is there's a box you can check that says I want to register to vote. You check that box, it takes you to the Secretary of State's website where you have to do what anyone else has to do to register to vote, print something out and mail it to your county registrar. But the Texas Civil Rights Project said that this confused a lot of voters. They thought that they were done, they didn't think they had to mail anything in. And that's what sort of led to this lawsuit.

Goudeau: U.S. District Judge Orlando Garcia out of San Antonio is who heard the case. What did he rule?

Platoff: He sided with the plaintiffs. So he said "yes, I agree with you, the Texas Civil Rights Project, Texas is violating this federal law." And he's expected to, in the next week or so, give us a little bit more information about what kind of remedy the state might have to put in place.

Goudeau: In fact the Civil Rights Project wants him to do that within 90 days right?

Platoff: That's what they've asked for. I think the problem for them is that the state has said just this week that they're going to appeal the decision and the Attorney General's Office, which is fighting for Texas, says we're confident the 5th Circuit, which is the appeals court in this case, is going to feel a little differently. So we'll see what happens there.

Goudeau: This is just another ruling in sort of a long list of decisions coming out against Texas and the way that we handle voting in the state. Tell us about some of those other recent decisions.

Platoff: There have been a lot of rulings against Texas in recent years. The redistricting case is set to be heard by the U.S. Supreme Court just later this month. There are also, you know, cases on Voter I.D. and what voter I.D. people have to bring to the polls. So I think most of these are still pending. Most of these have been some bad rulings for Texas but a lot of it's sort of to be seen.

Goudeau: What's even more interesting is Texas has some of the worst voter turnout rates in the country. And so do you think some of this weighs into that?

Platoff: I think definitely advocates would say we should make it as easy as possible for people to register to vote and to get out to the polls. The other side of the argument, which is largely Texas, has said we need to protect against voter fraud any way we can and some people argue that online voter registration can be kind of a problem in that area.

Goudeau: So is there a larger problem with voter fraud?

Platoff: I think it's not as big a problem as sometimes we're led to believe. We've seen that kind of at a national level as well, but there are investigations ongoing into these kind of allegations.

Goudeau: What do you think the broader impacts of this could be if Texas has to allow people to register to vote online?

Platoff: Yeah, so it's an interesting question. Texas is one of only 12 states that doesn't allow for online voter registration currently. So definitely in the minority there. The question here is whether having to let people register to vote online while renewing their driver's license would kind of open the flood gates to online voter registration more broadly, which a lot of people would be in favor of.

Goudeau: Why do you think that the state doesn't want that or doesn't to allow that to happen?

Platoff: I think the state says, you know, we're already complying with this federal law, we're making it easy enough for people to register to vote and again there are some concerns about whether voter fraud might enter into the picture if we allow for any part of this process to happen online.