To better understand the Senate trial in the impeachment of President Donald Trump, Ashley Goudeau sat down with author and UT professor Jeffrey Tulis, Ph.D. 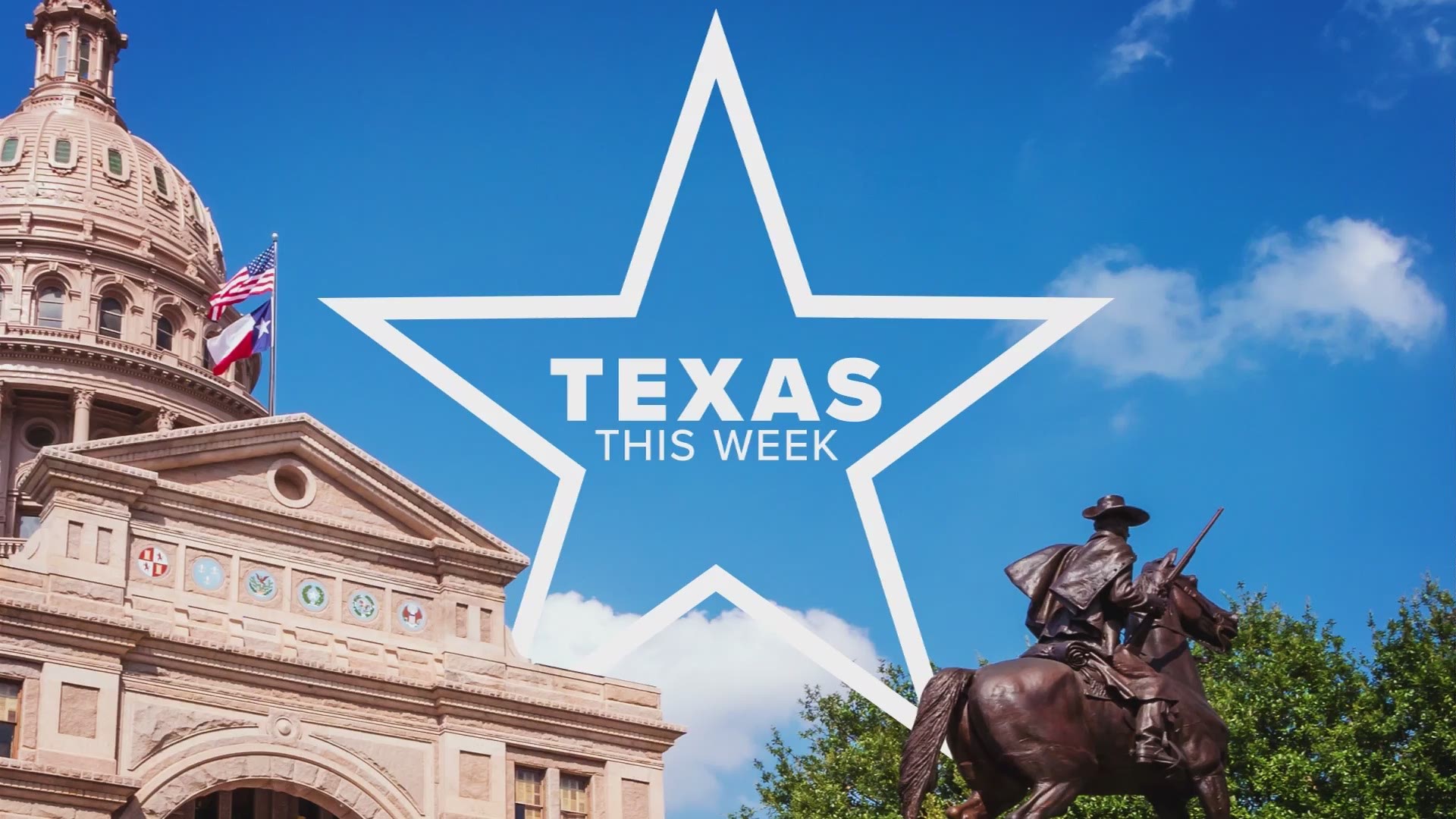 AUSTIN, Texas — The Senate trial for the impeachment of President Donald Trump is beginning –and some Texans will play prominent roles.

Former Texas state senator and current Congresswoman Sylvia Garcia (D-Houston) is one of the seven House Managers that will serve as prosecutors in the impeachment trial of President Trump. Garcia held a news conference in her hometown of Houston on Friday to discuss her role.

On Friday, it was also announced Ken Starr – former independent counsel and Baylor University president – will join the president's defense team. Starr is familiar with impeachment: his investigation led to the impeachment of former President Bill Clinton. The Senate will resume at 1 p.m. Tuesday for the impeachment trial of President Trump.

Governor Greg Abbott, a Catholic, fell out of the good graces of the church this week. The governor decided to opt-out of participating in the federal Refugee Resettlement Program for this fiscal year. In September 2019, President Trump issued an executive order requiring states to give written consent to opt-in to the program this fiscal year. Texas was the first – and reportedly only – state to opt-out. In a statement, the Texas Catholic Conference of Bishops called Abbott's decision "deeply discouraging and disheartening." A federal judge later blocked the president's order, stating refugee resettlement agencies should be able to place people where they will best thrive as they've done for nearly 40 years.

President Trump is making another trip to Texas. He is set to speak at the American Farm Bureau Federation's annual convention in Austin on Sunday afternoon. This is the second time in less than three months that the president has been in Austin.

The next step following President Trump's impeachment is the Senate trial to determine whether he will be removed from office. Understandably, a lot of people have questions about the process. For answers, Ashley Goudeau sat down with author and University of Texas Politics Professor Jeffrey Tulis, Ph.D.

Ashley Goudeau: I want you to first, for our viewers, weigh in on the historic significance of this impeachment and this trial that we're going into.

Jeffrey Tulis, Ph.D.: "Well, it's only the third one in American history of [a] president. There's been lots of others with judges, but it's very rare for a president to be impeached and it's still rare for a president to go to trial. This is the third one to go to trial. There was Andrew Johnson, there was Bill Clinton. And now President Trump. Of course, Richard Nixon would have been impeached and probably would have been convicted but he resigned before he was impeached. So, that's why this is the third rather than the fourth one."

Goudeau: The impeachment and the trial, it is part of the architecture for separation of powers in our Constitution. The impeachment was the first step in the ultimate check, which would be removal from office. And while it's not supposed to be partisan, it is. Especially now.

Tulis: "Right. But the first point that you made is one that most citizens really don't understand, and it's really a good point that you brought up. Impeachment is actually mentioned six times in the Constitution. And it's mentioned in each of the articles dealing with the major branches: the Congress, the president and the court. So, it's woven into the very fabric of the institutional design of each of the government that we call 'separation of powers.' And the way that it's woven in is, it's an attempt to make sure that the advantages that a president has in acting –for example in responding to threats that might result in war, for which we want a president to be able to act quickly and sometimes without consulting others and so forth – that needs to be balanced somehow in a republic by the legislature that gets to sort of think whether the president acted properly. So the president has a lot of advantages going forward in politics, looking forward, starting things. And the impeachment process was designed to make sure that the Congress had advantages looking backward, judging things. And so, it's really meant to embolden the whole institution of the legislature, the House and the Senate, not so much one party or the other as against the president.  Again, not so much one particular president or the other but the presidency is balanced by the Congress. And so, the impeachment is very, very important to all the other powers that the Congress has. For example, when they ask for information, if it's not possible for a president to be impeached, presidents are never going to give information if there's no consequence for not giving information. So, impeachment is really vital to, as you pointed out, the separation of powers architecture of the government."

Goudeau: And so, it seems as though now we're in a juxtaposition where the House feels as though he's overstepped those boundaries – or at least the majority in the House, right, the Democratic majority – whereas we're not seeing that in the Senate. How do you weigh that out?

Tulis: "Well, it's, in my view, potentially a breakdown in the constitutional order itself ... That we've come to this point in which people can't see their institutional responsibilities or even be really committed to the ideas that brought them to Washington as opposed to the party as a tribe."

Goudeau:  The trial in the Senate is expected to start on Tuesday and the most common types of questions I get from viewers are based in the comparison of this trial to a criminal trial that we would see in our judicial system. And that's just not simply an apples-to-apples comparison.

Tulis: "First of all it's very, very important that we realize that an analogy is not an identity. It means you're alike in some ways and unlike in others, just as you pointed out in your question. And so, that raises the interesting question is: Why did they use an analogy? Why do they, for example, call the prosecutors 'managers' not prosecutors? And why do they allow the jurors to overrule the Chief Justice if they disagree with his opinion? If, in fact, they wanted it to be like a criminal trial, they could have said, 'Well, they're prosecutors and they're jurors' and so forth.

The answer to that question is that they thought that the pretense, the analogy, could help elevate partisan politics to a higher politics. So it wouldn't be a trial like other trials, it would be a political trial but it wouldn't be politics as usual. So, the analogy is designed to create this high politics, this unusual politics. The problem with it, which I think you might have been intimating in your question, is if you take the analogy too literally, you get people saying things like 'Well, what crime did he commit?' Because it's not an ordinary crime that you need to be guilty of if you're a president."

Goudeau: And yet though, we continue to hear sort of this rhetoric coming from senators, particularly Republicans, who say they haven't accused him of committing any crime because we hear often you have to be accused of a high crime or misdemeanor. So, explain to us. There's some history behind that term.

Goudeau: Thursday, the members of the Senate took an oath to carry out impartial justice. But as we've kind of been alluding to and talking about, there are Democrats and Republicans who have already drawn their lines in the sand. They say, 'This is the way I'm going to vote.' So then, in this instance, in a Senate trial like this, what does impartial justice – what does that actually mean?

Tulis: "Well, we know what it doesn't mean. It does not mean coordinating with either the White House, as Senator McConnell has bragged about doing. Or, for that matter, having the senators – the House Managers are okay to coordinate with Speaker Pelosi just as the defense attorneys at the White House – but the senators on both sides shouldn't be coordinating with anybody at this point. So we know it doesn't mean that. That is a violation of the oath to do that sort of thing, even though they've already said they're going to do that – particularly the Republicans have been most vociferous of their thwarting of the oath. Your question's a good one. So then, what does it mean to be impartial?

It doesn't mean that you don't have to have any opinions like you might if you were a regular juror in a regular trial. It doesn't mean that you can't know the parties. It doesn't mean that you have to be sequestered from the news. So, what does it mean? It means, I think, that you have to imagine, 'Would I make the same decision if the person being charged were a person of my own party?' So, if you're a Democrat, you have to be willing to say, 'If Clinton or Obama or some other Democrat were charged with these very same things, would I vote to convict and remove from office?' And if you're a Republican, you have to be able to say, 'Can I really say, honestly, that if Obama were charged with the same things as what we're listening to now that I wouldn't be calling for impeachment and conviction? Can I honestly say that?' That's the question each one has to pose to themselves. That's what it means to be impartial, that 'I would make the same judgment no matter what the party was of the president.'"

You can view Ashley's full interview with Tulis below:

This week, Ashley left us with a thought from America's first president on the dangers of partisan politics.