Nate Silver and Clare Malone of statistical analysis FiveThirtyEight sat down with Ashley Goudeau to discuss the 2020 election. 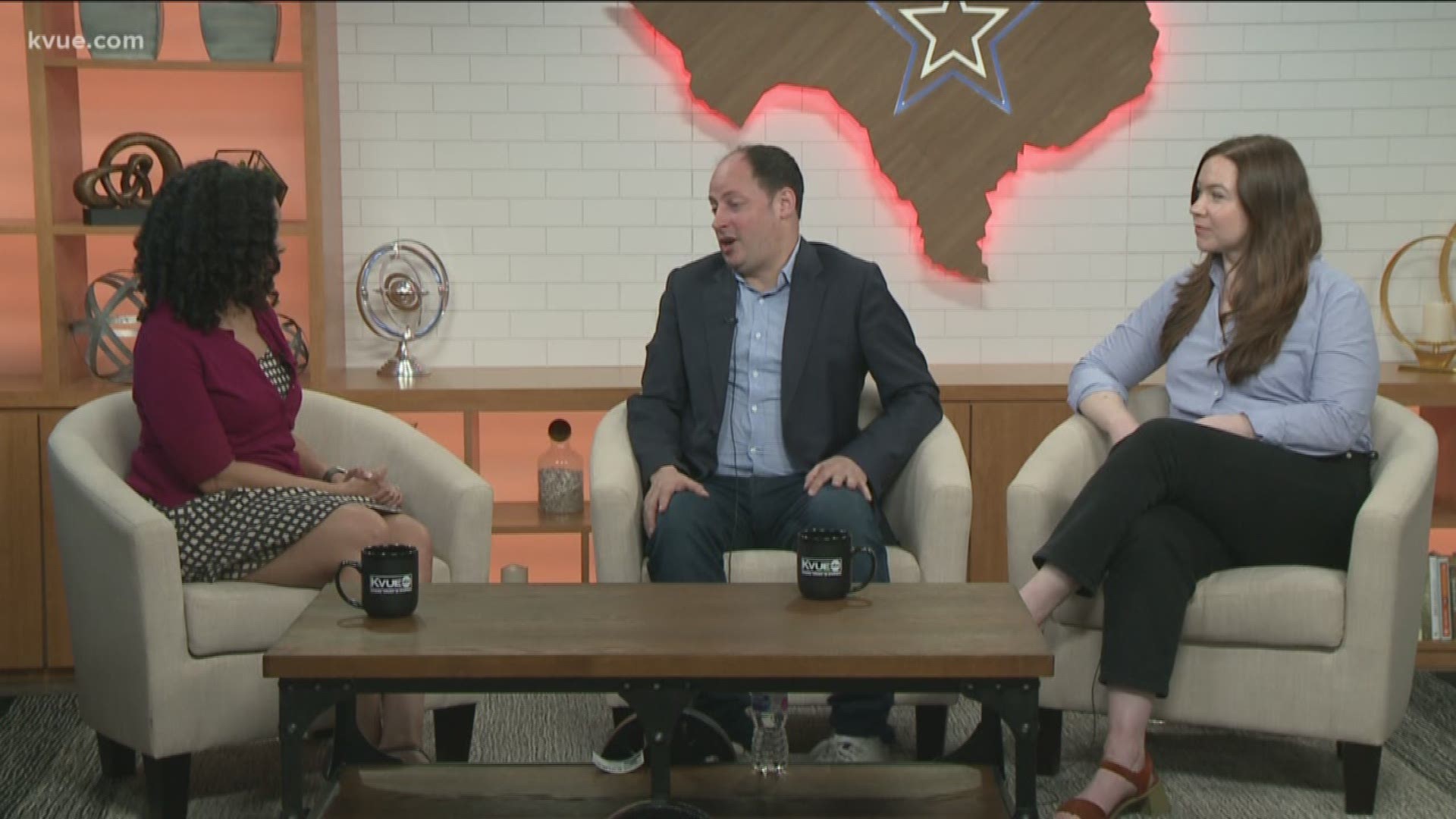 AUSTIN, Texas — What a week it was at the Texas Capitol. Bills died, the tax swap proposal was killed and a hotly contested bill made it through the Senate.

The week kicked off with a bang. On Monday, the Senate voted on its version of House Bill 3, the school finance reform bill. Up until Monday, the Senate version of the bill was contingent on lawmakers passing the tax swap that the governor, lieutenant governor and speaker of the House vowed to pass the week before.

But during the debate, the Senate approved a new funding source, a fund with money from other taxing revenues. Many took that as a sign that the tax swap wasn't going to pass in the Senate. So when the tax swap bill came up in the House floor, some representatives had some choice words for some senators, and then the bill was delayed until the next session.

The House of Representatives had a long night Thursday. Midnight was the deadline to initially pass House bills and resolutions. The day was filled with long breaks, stalling tactics and a few rowdy moments. Dozens of bills were killed or postponed.

Compared to last session, lawmakers have pretty much gotten along and focused on meat-and-potatoes issues this year. But that doesn't mean there aren't some divisive bills, and we saw one in the Senate this week -- a bill to make it harder for the state, cities, counties, schools and universities to take down historic monuments of memorials. The author of the bill said he saw what was happening at the University of Texas, with the removal of Confederate statues, and wanted to preserve history. Under his bill, it will take a super-majority vote of the Texas legislature or governing body to remove statues 25 years old or older. It also establishes a fund to put up counter monuments.

Democrats put up a valiant fight against the bill on the floor and tried to explain why these monuments are problematic, especially for people of color. They also said the decision to remove such things should lie with the people who live in these communities, not the state. But in the end, it came down to a party-line vote. That bill is now in the hands of the House.

The 2020 primary election in Texas is 10 months away. That seems like a long time from now but candidates know it will be here before you know it. And just this week, another Democrat threw his hat in the ring of presidential candidates.

All of this is keeping the statistical analysts at FiveThirtyEight very busy. Founder and editor in chief Nate Silver and senior political writer Clare Malone were in Austin this week to record their podcast, but first sat down with Ashley Goudeau to talk politics.

Ashley Goudeau: You're in Austin, promoting your podcast. Tell our viewers a little bit about it.

Nate Silver: "So it's the FiveThirtyEight Politics Podcast. We work for FiveThirtyEight, which is an ABC News company, we should say. But we cover elections, politics, as well as stuff like sports from a very numbers and data-driven view. At the same time, it's very early in the Democratic primary, very early in the general election phase, so numbers alone don't tell you everything. So the podcasts are where you kind-of hear us flesh out our thoughts, between the reporting that we do, the polls that we look at, the analysis that we do and you see us thinking in real time. And we think that transparency is really important. That reporters should explain to you if I have a conclusion about something, which at this stage is fairly tentative and preliminary, we want you to know like where that comes from and who we are as people and where our strengths are and where our blind spots are. I think the podcast, hopefully, communicates that to people."

Goudeau: I think sometimes people start to question polls because they see numbers coming out differently. You'll have a poll come out and then the very next day something else will come out with a different number. So how do you guys work through that?

Silver: "I mean, so one base thing is you want to wait to take an average of polls. If you do just look at one poll at a time, it'll drive you a little bit crazy. And we look at stuff like how many people were surveyed in the poll. A lot of primary polls, it's actually hard to reach Democratic primary voters. So you might only have 300 people, 400 people in a poll. Those numbers will bounce around quite a bit and also you sometimes get a different picture if you look at polls of Iowa or New Hampshire than national polls. Here in Texas, Beto O'Rourke polls a lot better than he does in national polls so you need to look at like, who conducts the poll, how many people are surveyed, how recent the poll was and what state it's from."

Clare Malone: "But I think what we try to do in the podcast particularly is talk about polls in a way that's accessible, I think. Because I think a lot of people see polls and stats and politics and they can kind-of – their eyes can kind-of glaze over. And we try to walk through, we try to walk people through what certain polls are good or bad for, we try to be pretty accessible about it. I'm not someone who comes from the same kind of stats-y background that Nate does so I often see myself as trying to figure out what the polls are telling us just as I'm talking to Nate on the podcast. So I think that we do try to give it sort of bite-sized chunks when we break it down every week on Mondays."

Goudeau: It can be hard to make predictions about the presidential elections, particularly when you look at what's going on right now. Looking to 2020, 21 Democrats.

Silver: "And historically, the more candidates you have, it's intuitive. The more candidates you have, the less predictable it is. And it is like breaking on a billiard table and you have 15 balls there, right, no matter how accurately you think you aim, there's just a certain amount of chaos that comes through when you have that many elements in play. And once you have the debates, you're going to see after every debate maybe some candidate will become the media darling and surge. You do have to say the candidate that does stand out from the pack right now is Joe Biden."

Malone: "Because everyone knows who Joe Biden is, and everyone else is being introduced to America."

Silver: "Yeah and it's like if you go to a new city and you see like, a bunch of restaurants you've never heard of before and then you see like, McDonald's or something, you know what I mean? There's something about the power of trusted, established brands in this field but there's so much confusion going on. On the other hand, it does mean that as other candidates become better established, that they may begin to rival Biden more. But he is, for the time being, in a category by himself as far as being at 35, sometimes 40% when everyone else is in the teens or single digits."

Goudeau: Former Congressman from Texas Beto O'Rourke got a lot of attention. And got a lot of attention because he put out his fundraising totals were the highest initially. So do you see, obviously people in Texas they hear that name a lot, they are very familiar with him after his Senate run. Do you feel like that's the case in other parts of the country?

Malone: "I think, we'll see. I mean Beto O'Rourke obviously was – it was such a high-profile campaign because it was a Democrat that actually had a fighting chance in Texas. I think that he is a little bit middling in the pack right now. As Nate said, it's really early. But he was a candidate who broke out in part because I think of, at least nationally, because of viral moments, right? He had that one speech that went viral where he addressed the kneeling in NFL games, and I think there's a little bit of Beto O'Rourke has a certain sort of media star quality and that's what brought him a lot of attention. And we haven't seen that yet in the presidential race."

Goudeau: The other candidate from Texas, we haven't heard his name at all a little bit. Castro, what are your thoughts there?

Silver: "That one in some sense is a little bit more surprising because you have a Democratic Party that is increasingly diverse, that emphasizes the importance of the Hispanic vote and he didn't really have this kind of moment in the first place and didn't really get much of a splash of media attention ... He is someone who is hurt by the 20 candidates running, I think. If you had five or six, he has a pretty interesting resume and inevitably you would have more profiles commissioned of him and whatever else. If you have 20 or 21 though, you have all these other flavors of the month, they're sometimes called. Probably Mayor Pete is the most recent now, but it's still May. We're going to see many and many of these happen over the course of time, and it might be Castro at some point."