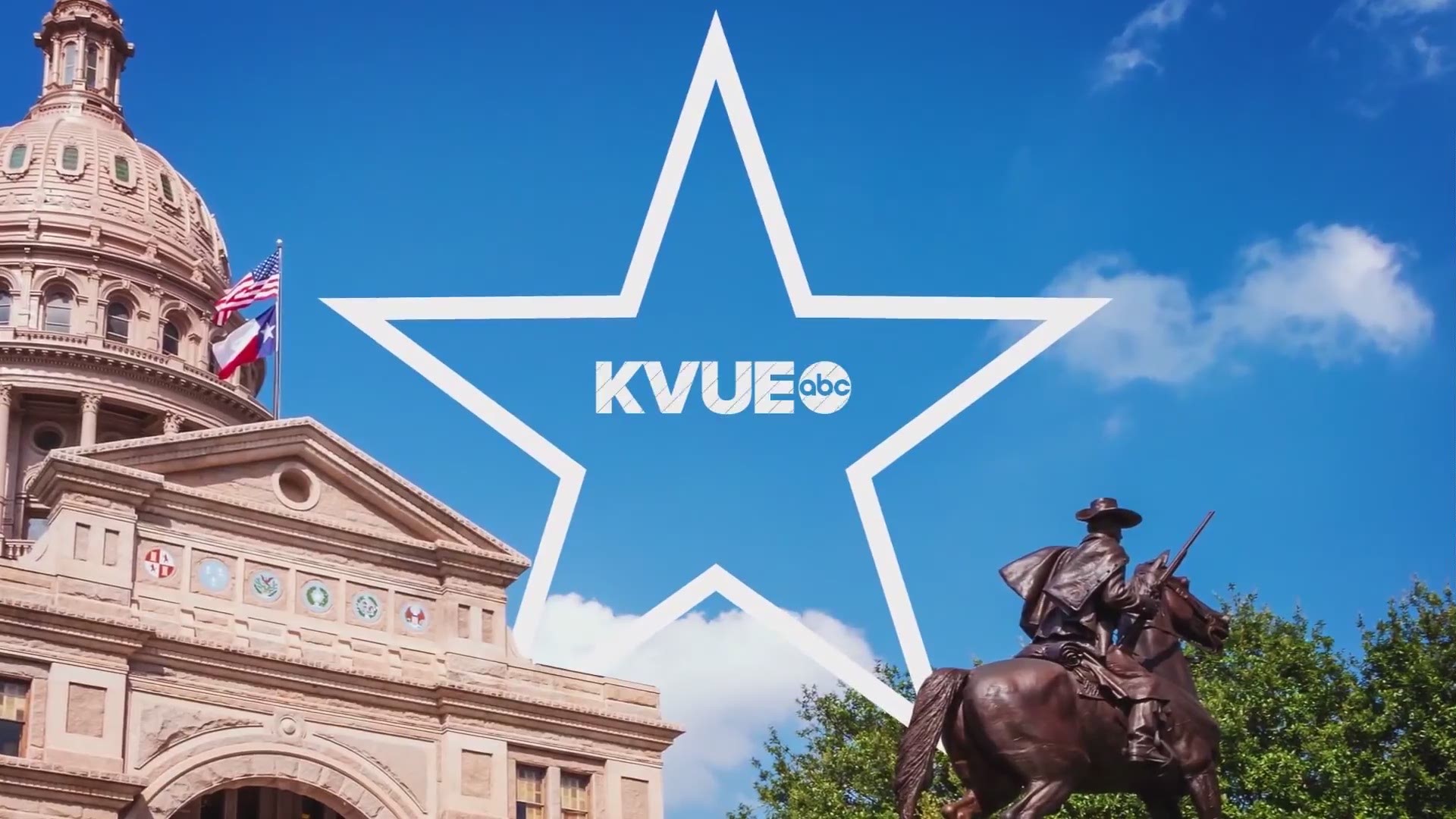 AUSTIN, Texas — Early voting started June 29, and the relatively tame Democratic race for the U.S. Senate heated up during KVUE's debate. Plus, Texas Senate candidate Don Zimmerman sat down with Ashley Goudeau to discuss his campaign.

Gov. Greg Abbott issued an executive order Thursday requiring Texans to wear a face covering over their noses and mouths in public places in counties with 20 or more positive COVID-19 cases, with a few exceptions. In a video announcing his order, the governor explains the surge in cases has triggered both markers he uses to assess the situation into the danger zone. So, to "re-focus" efforts to slow the spread without having to close businesses or issue a stay home order, he's requiring people to wear masks.

Air Force Veteran MJ Hegar and Dallas State Sen. Royce West went toe-to-toe in the KVUE U.S. Senate Democratic Primary Runoff Debate on Monday. As expected, the candidates largely agreed on policy issues, but things got interesting when they had to name one thing they admire about their opponent. And the heat really turned up in the candidate-to-candidate questions when long-simmering tensions seemed to boil over.

Like it or not, the current rules for mail-in voting will remain in place for the July election. The U.S. Supreme Court issued an order Thursday, denying the Texas Democratic Party's request to expedite taking up its case against the State to expand mail-in voting during the pandemic. The justices could weigh in later, possibly before the November general election.

Not only are voters casting their ballots in the primary runoff, if you live in State Senate District 14, you can also vote for a new state senator. Kirk Watson resigned, leaving six Central Texans vying to fill his seat, including former Austin City Council member Don Zimmerman. He sat down with KVUE Political Anchor Ashley Goudeau to discuss his campaign.

Ashley Goudeau: A lot of Austin residents are familiar with you from your time on city council. But tell our viewers a little bit about yourself and why you're running for the State Senate.

Don Zimmerman: "Well, I'm originally from San Antonio. I'm a fifth-generation Texan. I've been involved, I've been politically active for nearly 20 years now. And I really got active in electoral politics. I was elected to my utility district here in Canyon Creek. I became the elected president of the utility district on a platform of promising to sue the City of Austin for illegal taxation. So, I really started my electoral political life over fiscal issues. And I was able to keep my promise to the voters. I did lead a lawsuit against the City of Austin for illegal taxes. It took us seven years to win, but we finally beat them in court. We saved about $18 million and abolished the property tax here in our neighborhood. And I – what I learned out of that is I really do have a passion for getting things done in elected office. And there is something we can do about the out-of-control property taxes. But I also learned it's very, very difficult to push back against the greed of local government. And really the reason I'm running is because people are being taxed out of their homes. Local government is out of control. And I know I can do a lot of good in the State legislature that I could not do on the Austin council because it's dominated by big government progressives and socialists."

Goudeau: The Senate seat that you are running for, Senate District 14, has long been held by a Democrat. But you are a conservative Republican. So, do you think this election is sort of a long shot for you?

Zimmerman: "Well, if you look at the demographics, absolutely. Senate District 14 is probably two-to-one or three-to-one and maybe even more Democrat to Republican voters. So, it is a long shot from that point of view. However, as you know, as everyone knows, we are in extraordinary times. People are, have all kinds of fears, some rational and some not. It's a really crazy election date of July 14. But I've noticed that people that are politically educated and that have a habit of voting, even those people are confused about this election cycle and how things have been delayed. So, I would say for a conservative Republicans such as myself, this is the best opportunity to run and have a chance to win a seat because it's not your typical election cycle."

Goudeau: The 2021 Texas legislative session promises to be interesting and more than likely contentious. Not only are lawmakers going to be dealing with that budget deficit due to COVID-19, it's also a redistricting year. So, you know, being a freshman, if you are elected, how would you navigate this? And what skills do you bring to the table that would be most useful?

Zimmerman: "Well, that's a great question. I want to start out with pointing out that every legislative session, every two years, is very contentious. I think the issue in this election, in this cycle coming up, redistricting, of course, happens once every decade and that's its own separate can of worms. When it comes to fiscal issues, though, I want to touch on something you said about [the] budget shortfall. You see, I never see government in terms of budget shortfalls. I always see government in terms of budget excesses and budget extravagance and spending way too much money. So, we really don't have a budget shortfall. What we have is, we have too much expenditures in government. We have too much, too many bureaucracies. Government is trying to do too much. So, instead of looking for ways that we can take more money out of the taxpayers, we need to be looking for ways to cut government spending and bureaucracies. To put it this way: All of the businesses and individuals that have been negatively impacted by this virus, they're having to dig deeper to figure out how to make ends meet and they're having to cut costs, right, because they've lost revenue. The government is going to have to do the same thing. And as you saw one of my opponents 'Shut Down Sarah Eckhardt' is supporting an 8% property tax increase, which I think is really outrageous. It says to local business and local property owners, 'Yeah, we shut down your businesses and we cost you a lot of money and there's a lot of unemployment, and we know that you don't have the money to pay us, but we're going to raise the taxes anyway, beyond the 3.5% cap.' I think what that does is it shows disrespect for the people who pay the bills. Everybody in government should be cutting their expenses from the State to the city and county, in my opinion."

Goudeau: You talk a lot about obviously being fiscally conservative, but what other types of legislation would be your priority if you're elected to the Senate?

Zimmerman: "Well, I think one thing that needs to be done is we have to investigate what I would call really crazy local government policies of defunding the police. And one of the ways we could make up for security and law enforcement is we could possibly expand the role of [Texas] DPS. So if, say, the City of Austin is going to cut back on police and not enforce trespassing laws or not investigate vandalism and property crime, there could be a way that we could get state law enforcement to step in and fill that gap. Another area I'm keen on is ending the taxpayer-funded lobbying. [I have] a lot of experience with this personally in representing my taxpayers. I would go to the legislature, as an elected official, to represent my taxpayers and I would find that the person arguing against me is a high paid professional lobbyist from, say, the Texas Municipal League, a professional lobbyist who is paid for with taxpayer money, and that individual is lobbying the state reps for the diametrically opposed position that I have representing my taxpayers."

Goudeau: As you are well aware, there are six candidates on the ballot. Tell our viewers why they should elect you.

Zimmerman: "Well, of course, I will always respect the will of the voters. The voters are always right. And if they don't vote for you as a candidate and you think the voters are wrong, you go back to rule one, which is the voters are always right. So, I'm not telling them that I'm necessarily the best person. I mean, we have some voters in the city who would like to defund the police. I am not I'm not the best candidate for those voters. If you want to enable rioting and looting, if you want to bring more socialist redistribution of wealth into the city, I'm not your best candidate. But if you want the constitutional rule of law, if you want fiscal conservatism, if you want your private property rights protected, I am absolutely the best candidate. I have the most experience. I'm the only candidate who has ever eliminated a property tax. So, if you hate property taxes, you will love Don Zimmerman for Senate District 14."

The candidates on the ballot for the Texas Senate District 14 seat are:

Inside Texas Politics: Austin mayor says based on current COVID-19 trajectory, city could run out of hospital beds in 2 weeks

Greg Kelley docuseries 'Outcry' to premiere on Showtime this Sunday