Democratic Presidential Candidate Steve Bullock stopped by KVUE to discuss his platform and why he's the Democrat that should take on President Donald Trump in 2020. 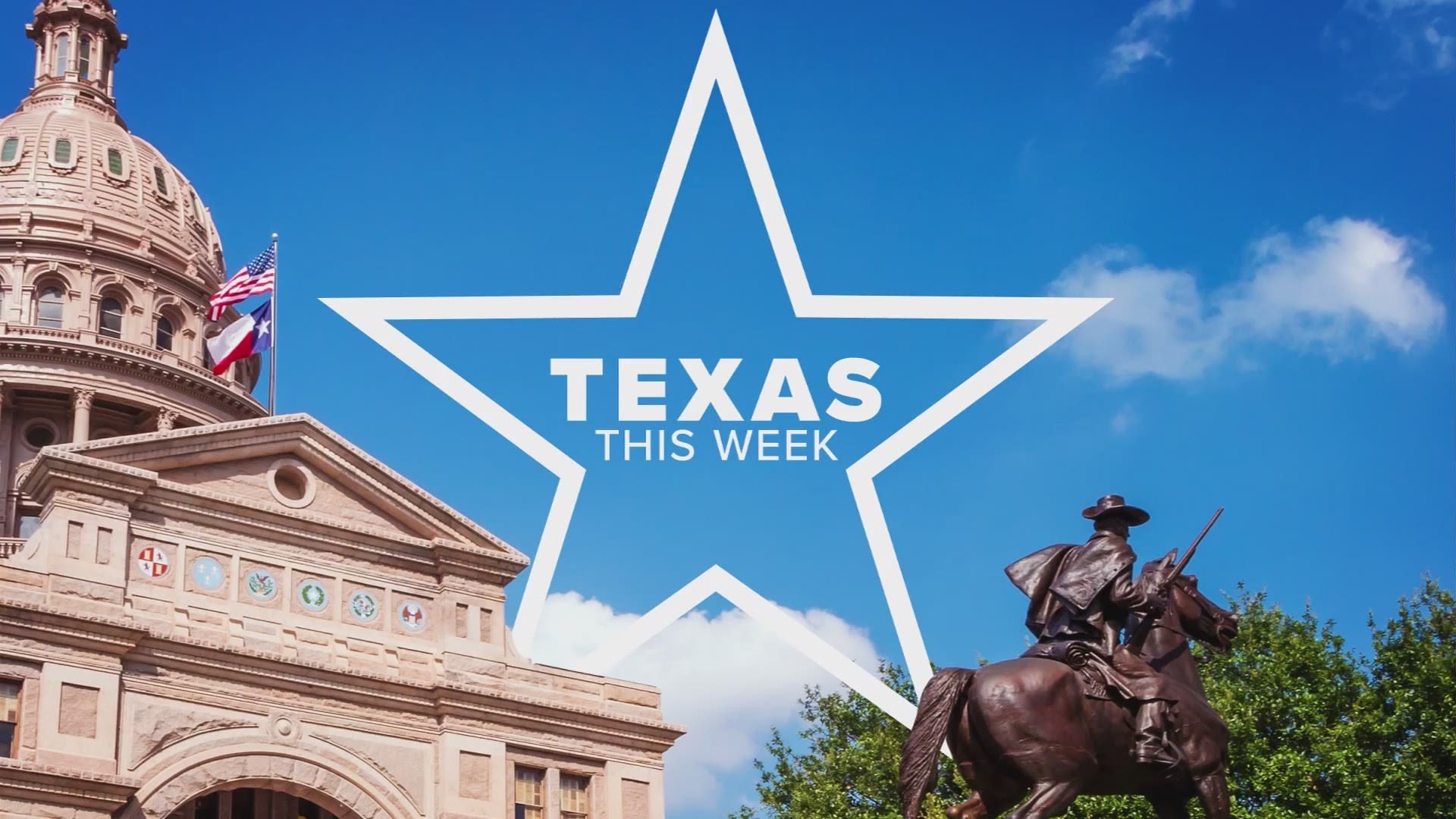 This week, the national conservative group Republicans for the Rule of Law launched a series of TV ads calling on 27 Republicans in the U.S. House and Senate, including two Texans, to condemn President Trump's phone call with the President of Ukraine. According to a summary of the call from the White House, President Trump encouraged the foreign leader to look into his political rival, former Vice President Joe Biden, and his son, Hunter.

Central Texas Congressman Bill Flores is one of the lawmakers targeted in the ads. His office said they have no comment.

Former Texas Governor and current U.S. Energy Secretary Rick Perry is also in the crosshairs of the Ukraine scandal. Democrats conducting the impeachment probe subpoenaed Perry for documents related to his role with Ukraine and whether he was involved in decisions to withhold military aid.

President Trump has said Perry teed up the call. A spokeswoman for Perry said he wanted the president to discuss energy issues.

The ongoing drama with Texas Speaker of the House Dennis Bonnen and the CEO of the conservative political organization Empower Texans could come to a head soon. This week, Michael Quinn Sullivan announced he will release the audio recording of a conversation he had with Speaker Bonnen in which Sullivan said Bonnen gave him a list of Republicans to target in the next election. That request raised a lot of eyebrows because Bonnen told all members of the House, several times, campaigning against incumbents won't be tolerated.

The conversation is also the subject of a Texas Rangers investigation to see if any campaign laws were violated.

The fourth Democratic presidential debate is scheduled for Tuesday in Ohio and this time around, there will be 12 candidates on stage. But there are currently a total of 19 Democrats running for president. One of the seven who won't be debating was in Austin recently. Political Anchor Ashley Goudeau was on vacation, so KVUE's Jenni Lee sat down with Montana Governor Steve Bullock to learn more about why he's running and his vision for America.

Jenni Lee: Tell us a little bit about yourself and why you want to become President of the United States.

Gov. Steve Bullock: "Montanan born and raised, served as Attorney General before becoming governor. And in 2016, I was the only Democrat in the country to actually get reelected in a statewide race in a state where Trump won. And he took Montana by 20, I won by four, 25 to 30% of my voters voted for Donald Trump. If we can't win back some of the places we lost, we're not going to win this election.

Of all states I've traveled, a whole lot of folks are saying the economy and Washington D.C. isn't working for them. In part, it's because the dark money and the campaign spending. That's been the fight of my career since Citizens United. And I think it's a challenge of our time. So someone that comes from someplace other than Washington D.C, where I actually have to get things done. Someone that balances a budget, someone that actually works with Republicans – my legislature is majority Republican. We've been able to get progressive things done. I think that's how we both beat Donald Trump and get Washington D.C. working for all of us again."

Lee: Well, speaking of Donald Trump, his time in office has been described as "unprecedented." We heard that term a lot during this past week as that whistleblower report has come out. Now, how – where do you stand in the impeachment inquiry against the president right now?

Bullock: "I didn't want to let the next year and a half be all about Donald Trump. When I'm out there talking to folks, they're worrying about their health care, they're worrying about can they keep the job. They're not talking about everything that cable news is talking about. But in this last week, when you literally have a president withheld money to Ukraine, who asked the Ukrainian president, 'Hey, do us a favor when it comes to Joe Biden.' When you had him directing the Ukrainian president to work with his personal lawyer and the AG and then try to cover it up, I think this impeachment inquiry has to go forward. Now it's not necessarily I think the best thing politically, but I think for the sake of our country, for this representative democracy, we have to actually go on with this."

Lee: As controversial as he is, he's still very popular with his base. How do you go after that base and get that vote?

Bullock: "Yeah, and that's where like, 25 to 30% of my voters voted for Donald Trump. Not because I ever acted like him or followed his policy. People need to believe that government works and cares for you, and I show up in the State of Montana, fourth largest state in the country. I don't have the luxury of just talking to those Democrats. I go all across. I listen. I try to respect the individuals. And I think what we have to recognize, even with this impeachment inquiry, [a] whole lot of people are going to think, 'Oh, this is just set up against Trump. It's not real.' I think the greatest challenge facing us as a country right now is the deep divisions that we have. I believe I can bridge those divisions like no one else in this field."

Lee: There are a lot of things that are important to Texans. Two among them: immigration and health care. I think some recent stats came out from the Census Bureau showing that Texas has the highest rate of uninsured [residents]. So, how will you address that if elected president?

Bullock: "Yeah, in Montana actually we were 20% uninsured before we passed Medicaid expansion. And I worked with almost a two-thirds Republican legislature to do that, and I think that's one of the failings that's happened here in Texas. But I think you can get there. Everybody ought to have access to affordable health care 0 you can get that. There with a public option, with finely negotiating drug prices, with ending surprise medical billing and out-of-network charges. But you don't have to disrupt the lives of 165 million people that have employer-sponsored health care. So the best way to do it is to build on Obamacare, not rip it down and start all over.

Lee: There seems to be two schools of thought when it comes to that, as far as the Democratic candidates are concerned. Medicare for all or Medicare for all who wants it. Where do you stand?

Bullock: "I stand for the Medicare for all who wants it because the Affordable Care Act was actually the biggest movement toward getting everybody health care since we first passed Medicare. And if we're going to tell people, 'Well, even if you like your employer-sponsored care, we're going to take it away from you,' that's 70% of America. I don't think that's the best policy. I also don't think it's the best politics."

Lee: Well, one of the issues Republicans have with Obamacare is the personal mandate, right, requiring all Americans have health insurance or pay a fine. Should healthcare be a requirement or an option?

Bullock: "Well, I think at the end of the day, especially if we're going to cover pre-existing illnesses and things, we have to get to the point where everybody wants it and it's affordable and that way we have the overall risk pools covered. So from that perspective, everybody needs to be able to have health care. And what we talk about is a mandate – it should be something, if it's not sponsored by the employer, that you're going to be buying in. So everybody will have it as long as we can make it affordable."

Lee: So the other issue important to Texans is immigration. Obviously, no quick fix here, but how would you tackle it if you become president?

Bullock: "I mean, we do need comprehensive immigration reform. We need to protect the Dreamers. Those in this country without documentation, two-thirds of the people who've lived here a decade. You know, we've got to get a path to citizenship for them. What's happening at the border it's a humanitarian crisis. In part, it's a crisis of our own causing when, you know, we're reducing aid to the northern triangle countries. But we also have to recognize that the greatest problem right now with immigration, other than the bureaucratic challenges and things, is Donald Trump. He's using it to literally rip families apart and rip our country apart. You don't have to change the laws of entry into this country and things to actually fix that. Once we do that, once we get rid of Donald Trump, we can try to get back some sanity. Because there was almost bipartisanship on immigration reform not that long ago. I think we can fix this."

Lee: August was marked by tragedy here in our state by the two mass shootings. What would you do to prevent something like this from happening again?

Bullock: "We need to start looking at this as a public health issue, not as a political issue. Look, I'm a gun owner, I hunt. Like 40% of American households, I own guns, but I'm also a parent. And I'm tired of lowering the flags for these mass shootings, this but one example. If we looked at it as a public health issue, we know what to do: universal background checks, red flag laws, some safe storage laws. And not even a Dick's or Wal-Mart sells assault weapons anymore. They're not used for hunting, they're not used for self-defense, there's no reason we're selling them anymore either. But the difference is, when I was growing up, the NRA was a gun safety, shooting and hunting organization. Now it's just a dark money-filled political organization to drive us apart. Think about it: Right after Parkland, Donald Trump said universal background checks, we should do this. And the vast majority of NRA members in those as well. The minute he – right after he talked to the head of the NRA, he walked backwards. He did the same thing after El Paso as well. So, there's 30 million reasons why we're not making any progress. That's the $30 million the NRA spent on his election. And I think it's time for folks like me too, gun owners, to say we need some change. We need to look at this not as a political issue but really as that pubic health issue."

Lee: Governor Bullock, you're in a very large, crowded field. We didn't see you in the last debate. Just why should people vote for you?

Bullock: "Yeah, as the only one who's actually won a Trump state, I can win back the places that we lost. As someone who's actually bridged divides with Republicans to get progressive things done, being outside of Washington D.C., I think I can get government to work again. And as someone off the coasts, like our path to victory isn't just through the coasts, it's through those places that we lost last time. And finally, you know, we now have 22 states in this country that are completely controlled by Republicans in both state houses and the governors. If the Democratic Party can't compete everywhere in this country, we're not going to be able to make the meaningful change like getting Medicaid expanded here in Texas."

Click here to read more about Gov. Steve Bullock and his campaign for President.