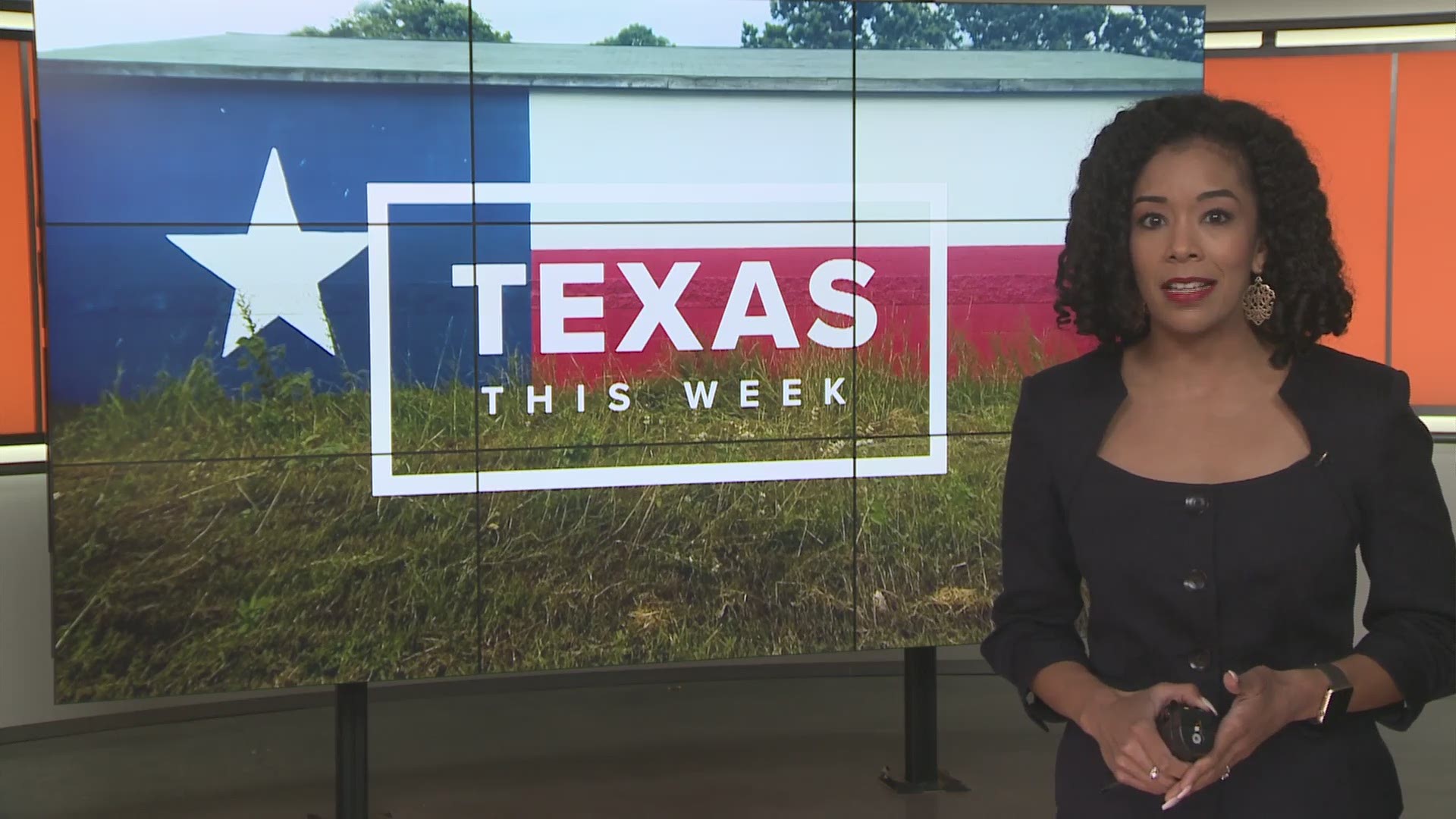 AUSTIN — It's something people in Austin hear about frequently; affordable housing. This week, local, state and federal leaders joined market insiders and stakeholders in Austin for the Texas Affiliation of Affordable Housing Providers' annual housing conference. In Texas This Week, Ashley Goudeau sits down with Janine Sisak, vice president of the board for the organization..

Janine Sisak: "Well, the conference is an annual conference that we hold here in Austin every year. And it's an opportunity for everybody in the affordable housing industry in Texas and beyond to get together and talk about, you know, what are the hot topics, what are best practices, sharing resources, sharing war stories. So it's a chance for us to all get together once a year and talk about the challenges of our industry."

Goudeau: And so, just so that we are transparent with our viewers, tell our viewers a little bit about the Texas Affiliation of Affordable Housing Providers. What do you guys do?

Sisak: "Well, we are a trade organization. We have about 400 members. Again, it is a conglomeration of developers, investors, lenders, representatives from cities, local municipalities, counties. Everybody who serves as a stakeholder within the affordable housing industry."

Sisak: "Well, generally in our field, due to some of the specifics in our financing mechanisms, we consider affordable housing housing that's affordable to moderate to low income people. So the people we're serving are working people, people that work in the service industry, people that work at the H-E-B, you know, in hospitals, administrators, schools, those types of people who are, again, in the middle income to low income range."

Goudeau: Because when we look at financial outlines for housing to be affordable, you should be spending about 30 percent of your income on your housing right?

Sisak: "That's correct. Above 30 percent and you're considered rent burdened and that you're paying a disproportionate amount of your income on your rent, leaving less money of course to do other things that you need to do in your life for your famil,y such as procuring good health care, you know, having disposable income. All those things that we need to thrive as families in the state."

Goudeau: Texas is always ranked as a state that does well economically, but there are some challenges statewide when it comes to producing and having and maintaining affordable housing. What are some of the biggest issues in your opinion?

Sisak: "Well, some of the issues for the people that we serve are that wages aren't increasing as much as you would think based on how well our economy is doing here in Texas, and in Austin in particular. So wages are flat for a lot of people that we serve but the cost of housing is going up. And then the problem is exacerbated by the fact that some of our inner city areas, such as East Austin, are gentrifying. So people that have lived in East Austin, for instance, for generations can no longer afford housing because property taxes are higher. So we're seeing gentrification forces and people having to leave the City of Austin to seek affordable housing in some of our outlying areas. And then school performance is also an issue with that as well."

Goudeau: It's interesting that you mention the wages because Texas is one of those states, there are several states left that go by the federal minimum wage instead of having a higher minimum wage. Austin likes to have a living wage that they prefer employers to pay, but Texas just isn't seeing a rise in that number, that number's not moving.

Goudeau: Are you of the opinion that the issues you're seeing in Austin are also prevalent in other major cities in Texas; Houston, Dallas, San Antonio?

Sisak: "Yes, absolutely. I mean Dallas, their close-in neighborhoods are seeing revitalization and a resurgence in terms of people wanting to live close to the urban core, within the urban core, close to jobs. I'm of the personal opinion that traffic has a lot to do with it. And I also believe it's really important to locate housing near jobs because it keeps people off the highways. And it actually is a huge benefit to employers to have affordable housing located near their job centers because it reduces recidivism and absenteeism, all those sorts of things. So you see these dynamics that you're seeing in Austin definitely in Dallas and Houston."

Goudeau: And not only do we have certain barriers already to affordable housing, there are some emerging issues that you guys discussed at the conference. What are some of those things that insiders are seeing?

Sisak: "Well, Hurricane Harvey had a huge impact on the City of Houston, Beaumont, Port Arthur. There were hundreds of properties, affordable housing properties and market rate properties that were damaged by the hurricane. So we spoke a lot at the conference about, you know, what the government land office and the counties by the coast are doing to get disaster relief dollars out of the door. Another issue for our industry is corporate tax reform. And that impacted our financing tools in that one of our largest financing tools that we use is a housing tax credit program. And so the reduction in corporate tax rate reduced the need for corporations to buy housing tax credits, which is the federal income tax credit that we basically sell in part to finance affordable housing."

Goudeau: And so with that, how is that affecting people on the ground?

Sisak: "Well it just makes it more difficult to get these deals done. We live in a universe in affordable housing, of limited resources. We can't just increase the rent when construction costs get higher because all of our units are rent restricted to stay affordable long term for people that need affordable housing. So our, the universe of resources we have to build it are limited and when corporate tax reform reduces the equity influx into our deals, it makes the deals more difficult to do and some of them just don't get done."

Goudeau: And again, that leaves people in need of housing.

Sisak: "Absolutely, absolutely. The City of Austin did a study in 2014 suggesting that we need 48,000 units of affordable housing and that study is now three years old, which suggests that the need is significantly greater. So we need to do everything we can to get as many units on the ground as possible."

Goudeau: Despite all of these issues and barriers, there are some opportunities happening legislatively that could help with this. Talk to us about some of those.

Sisak: "Well, on the federal level earlier this year, there was an increase in the housing tax credits that are available to our industry across the nation. Texas got a 12 percent increas,e which allowed another 17 affordable housing developments to get funded this year. So that was a huge benefit. The City of Austin has been really wonderful in promoting and getting passed affordable housing bond programs. We are looking at putting a third bond package on the November ballot ... it will be voted on and includes $250 million in additional resources for affordable housing."

Goudeau: And just so people really understand what happens when they vote on these bonds or when these bond packages are passed, talk to us about those financial mechanisms, how it works from the money people are approving to building affordable housing.

Sisak: "Well the general obligation bonds is a financing tool cities often use to fund important public policy initiatives like infrastructure, school improvements, affordable housing. And so what that does for our industry is it just creates a pot of additional soft financing, so when we have a gap in our financing, the City of Austin is there to basically partner with us to increase the amount of affordable that we're putting on the ground."

Goudeau: And a lot of times you guys can get matching funds for those dollars from the federal government right?

Sisak: "Yeah, and we access a lot of different sources. Again, these projects are very difficult to finance, so we're constantly, you know, looking for money from various sources. Part of the interesting thing that comes out of the conference is that we all get in the same room and try to create a scenario where different financing sources can be layered on a deal in the most effective manner."

Goudeau: What are some of the innovative ideas and projects that you're seeing coming out of other parts of the country in addressing their affordable housing issues?

Sisak: "Well, you see a lot, I mean you're starting to see ... what I find interesting is we're starting to see in Austin some of the more best practices that you see in other cities. Perhaps those in the northeast and on the West Coast who, especially the West Coast who faced an affordability crisis before we did. So what you see there is, and I explained it a little earlier, you see higher density housing in transit-oriented districts located near public transportation or near job centers. So you're seeing that happen a little bit in Texas now. We're seeing higher density developments. The Mueller redevelopment in Austin is a good example. When the City negotiated that contract with the master developer there they insisted on a certain level of affordability across the board in the Mueller development. And so there are two affordable housing developments there. There are more than 200 units each on a very small site and they are indistinguishable from market rate product. They look the same. And so nobody knows that they're affordable but the people who are working at Mueller can now afford to live there as well. So you're seeing a lot of those public-private partnerships whereby the cities are saying to developers you need to include affordability within your market rate project. Another example of that is the Saltillo redevelopment in East Austin. Capital Metro, which is our regional metropolitan authority, owns the site, sold it to a master developer, but again required a certain amount of affordability on that site. And those opportunities are really exciting because they tend to be very well sited real estate where people want to live, where they actually do live and are getting priced out."

Goudeau: And what's really exciting about some of these projects is when you can offer someone an affordable place to live it helps with their own economic mobility later in life.

Sisak: "Absolutely. We hope that the affordable housing that we provide is for many families a step up and into homeownership. This is not meant to be, I mean, there are certainly some that want to live in a rental community long term for whatever their personal interest is, but a lot of people want to step up into homeownership. And so there are, and a lot of the affordable developments around Texas, there's a requirement for the owners to provide families with credit counseling for instance or financial literacy classes to help people learn about the homeownership process and improving their credit and their credit worthiness to step into homeownership."

Click here to learn more about the Texas Affiliation of Affordable Housing Providers.