Ocegueda wants to challenge conventional politics and the way voters think about the issues. 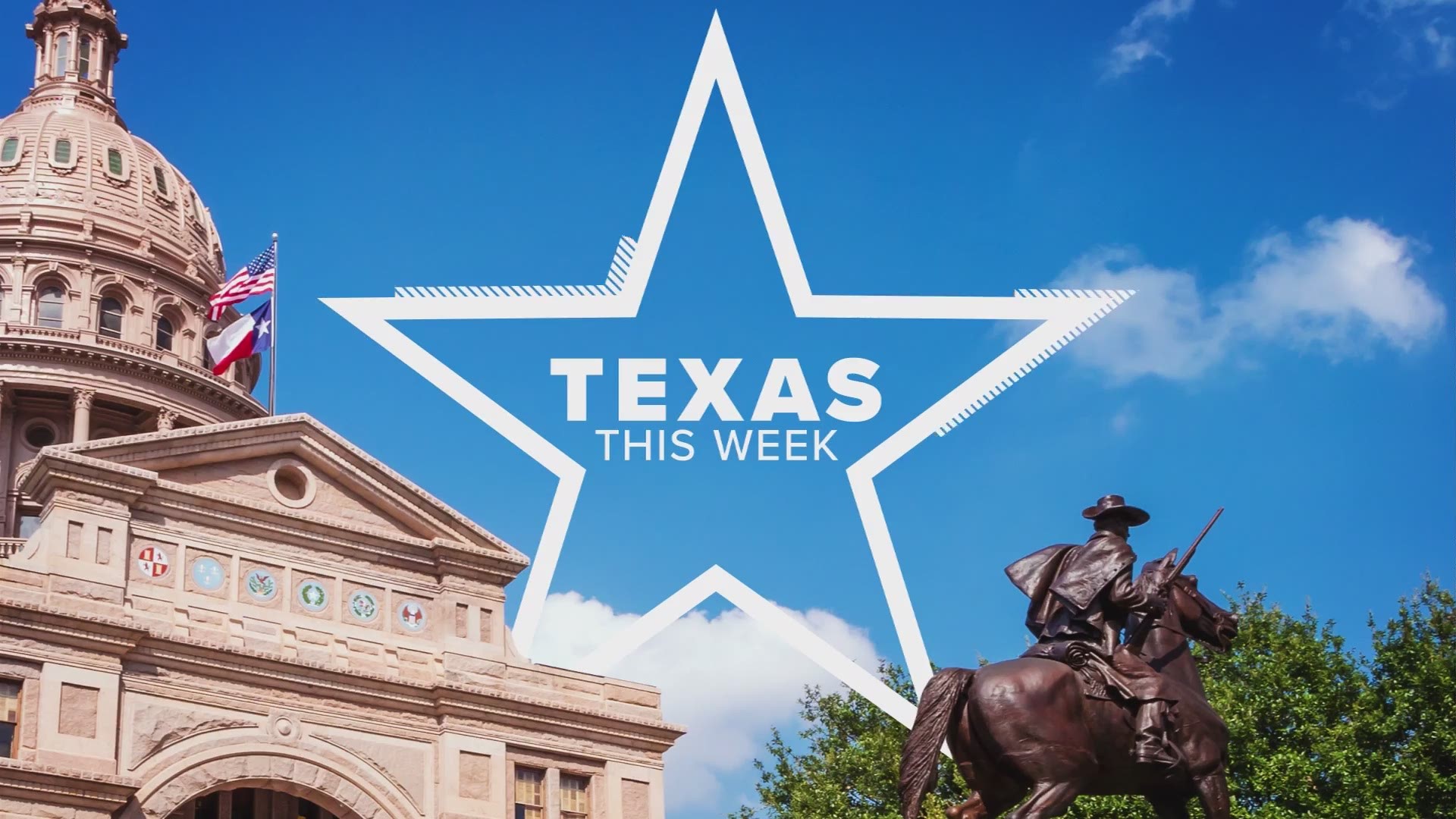 AUSTIN, Texas — The deadline for candidates to turn in the paperwork to be on the Texas March primary is Monday – and Adrian Ocegueda, a Democrat running for U.S. Senate, stopped by KVUE to discuss his campaign.

And another familiar face filed to run this week. Former Texas Democratic gubernatorial candidate and state senator Wendy Davis is running to represent District 21, which includes parts of Austin, in the U.S. House of Representatives. That seat is currently held by Republican Chip Roy.

Meanwhile, another Texas lawmaker is bowing out of the race. State Representative Rick Miller announced he is no longer seeking re-election. In an interview with the Houston Chronicle, the Sugar Land Republican said his primary opponents are running against him because they're Asian and the district has a sizable Asian population. In a statement to the Texas Tribune, Miller said the comments were insensitive and inexcusable and added he doesn't want to be a distraction for the Republican Party, so he isn't seeking re-election.

The Texas Legislature is out of session but lawmakers were back at the Capitol this week to discuss issues impacting the Lone Star State. The Senate Select Committee on Mass Violence Prevention and Community Safety met Wednesday to hear testimony from video game, social media and mental health experts. And the Senate Committee on Health and Human Services met to discuss vaping and implementation of the state's new law that raises the age to buy or use tobacco from 18 to 21.

One of the 11 Democrats running to challenge U.S. Senator John Cornyn in 2020 aims to challenge conventional politics and the way voters think about the issues. Adrian Ocegueda sat down with Ashley Goudeau to discuss his campaign.

Ashley Goudeau: For our viewers who don't know much about you, tell us a little bit about yourself and why you're running for the U.S. Senate.

Adrian Ocegueda: "Sure. A little bit of my background, went to Princeton for my undergraduate degree. I'm originally from El Paso, Texas. Returned to my hometown of El Paso, Texas and actually ran for a small city council seat there but ended up working in the mayor's office there. I was there doing the administration when we converted from a strong-mayor form of government to a city management form of government, and we also just kind of did a lot of streamlining during that administration. I think the other issue that, after that, I came back, moved to Dallas, where I pursued my MBA. And after getting my MBA, I've been working in private equity since. I'm running largely because I feel that our politics and our political system, there's a lot of structural issues that happen in a lot of areas from the environment to health care but where it actually starts is what are some of the structural issues that actually happen in politics, which is this process overall. And so, when you talk about a candidacy, you want to start at the beginning level, which is politics. What are some of the structural issues that we face today? And then how does that trickle all the way to policy that deals with everything from the economy to income equality to Medicare to everything else? But it actually starts with the political process itself and what structural changes have to change there."

Goudeau: If you say that you're running for Senate because there's an issue with the way politics is played, what actual policies would you want to pass to change that?

Ocegueda: "That's a great question, an excellent question. I think a part of that gets to – and the reason that's a very difficult question to answer is because it does rely on the constituencies to make that kind of change. The question, one could argue simple things, are establishing an official election day so that people actually have the time to go to the polls and vote, which is one thing. I think the other thing is how do we dissect how much time each candidate gets, how do we get that messaging out? A part of that is funding. A part of that is campaign finance, how do we kind of look at that? Those policies are a lot harder to change because the part I'm trying to change is how do I run as a candidate? How am I changing a part of that political process as a candidate as opposed to necessarily putting a law in place that says, 'Let's change the system for what it is.' What I can do as a candidate is to say, 'This is the style of candidacy that I'm going to run,' which is a candidacy that says, 'Hey, time out, let's take a little bit more time to think about issues.' And so, essentially, that is why you're running. You're running because you know you could be in other avenues of politics and political structure, other bureaucracies, but if you're trying to affect the system, the only way you can do that is by having your name on the ballot and running the kind of race you want to run."

Goudeau: Let's talk about some of those issues, starting with health care. Particularly when we look at Texas, we have the highest rate of adult and children who are uninsured. What do you think needs to happen to address this?

Ocegueda: "Well, we look at that as two-fold and as a Democrat, obviously, what we are trying to address is reducing the cost of health care as well as increasing coverage. So, I think where there's a level of bipartisan support is that most of us agree that health care, in terms of the inflation of that market, needs to have some form of control and we did see a little bit of a lull, but we're at this tipping point where we're expecting to see health care costs go up about 5 to 6% in 2019 and in 2020. So, when we look at that increase, we have to say what is going on in that market?

So, that address controlling costs within the health care and prescription drug market, which is an important thing that we need to consider but I think that's bipartisan. And you don't just see that within Democrats who are proposing large government health care systems. You see that also in industry, where there's a lot of people in industry who are also trying to address this issue of increasing health care costs. So, I think there's bipartisan support in terms of how do we start looking into the health care industry and what is going on with inflation and prices of that? The second area is coverage, which is how do we expand coverage, as you alluded to in your question, to more people. And I think that gets to a discussion about how big and wide should the social network programs be and that's a discussion I think we do need to have that is an argument and distinction with the Republican side. Because I think for our side, we say that there is benefit to having a wider social program. The question that we'll get bombarded with is, 'How do you pay for it?' But again, there's a fundamental misunderstanding of how money works, which is another kind of low point that our party sometimes has when we get asked how are you going to pay for it. We don't necessarily know the proper way to answer that question and how that question gets answered, so we get stumped there. And a lot of times when we get attacked from the right, we get attacked as socialists who want to expand the social network, but we need to have a way of knowing how to combat that in a way of saying what are the benefits to the social sector, the social safety network that we are proposing, and why is that a larger benefit to both the private sector and the public sector, than we're able to articulate. So, I think all of those issues we're going to have to work on and engage in that discussion with the Republicans."

Goudeau: When you think about mass-violence in this country, your hometown was one of the places where the most recent attacks happened. How do you think we can begin as a country to take steps to reduce these types of acts?

Ocegueda: "So, when I think of violence and all of the spectrum of issues that we need to take, I do not go as far personally as 100% mandatory buyback program. But I do go as far as to say, 'Look, do I think a universal background check should be adopted? Yes, but I think there's some work to do with the gun-owning community to get them over the finish line in terms of joining with the Democrats on adopting that as a policy.' But again with – rather than it being a slippery slope, which I think a lot of folks on the NRA side or those that are gun owners, they don't want a slippery slope. They don't want to say you're going to take one step on universal background checks and then this is going to lead to a whole other of gun control laws that are going to limit my ability to own a gun. So, I think it's important for us to say if we're going to adopt this policy, great, we'll evaluate it in one year, two years' time. Did it have the impact that we wanted and then what are the other policies that we're affecting to reduce that level of violence? Including educating folks in terms of certain strains that they have in terms of their jobs, why that actually took place, not blaming minorities or people of color for some of the stress that they're legitimately feeling in their own lives.

So, fixing a lot of policies actually helps the issue of gun violence but the question is making sure we have a time period to evaluate that in the effectiveness of the policy we put in place."

Goudeau: You're running in a very crowded field of Democrats, there are 11 candidates that have filed paperwork with the FEC [Federal Election Commission] as of late. Why should our viewers and voters select you?

Ocegueda: "I'm not a candidate that thinks victory is the end game. Victory is just – victory is just you getting a job. The end game is being effective at that job. Being effective at being a senator, and that means solving the problems that our nation is facing and those issues are quite complex. So, I think there are a lot of my opponents who are running to be the Democratic nominee because they believe in a narrow interest of the Democratic Party, and I'm sure that's what Cornyn is doing on the other side. I'm actually trying to solve problems. So, if you're a person that wants a person who resembles or looks and they're fighting for Democratic principles but is actually interested in the end game, which is post-winning, how do we work towards a solution, then I hope people will give my candidacy a view."

'Rare' cardinal discovered in Central Texas appears male on one side, female on the other