Texas This Week: Insights on the 87th Texas Legislature

Texas lawmakers traveled back to Austin this week for the start of the 87th legislative session. 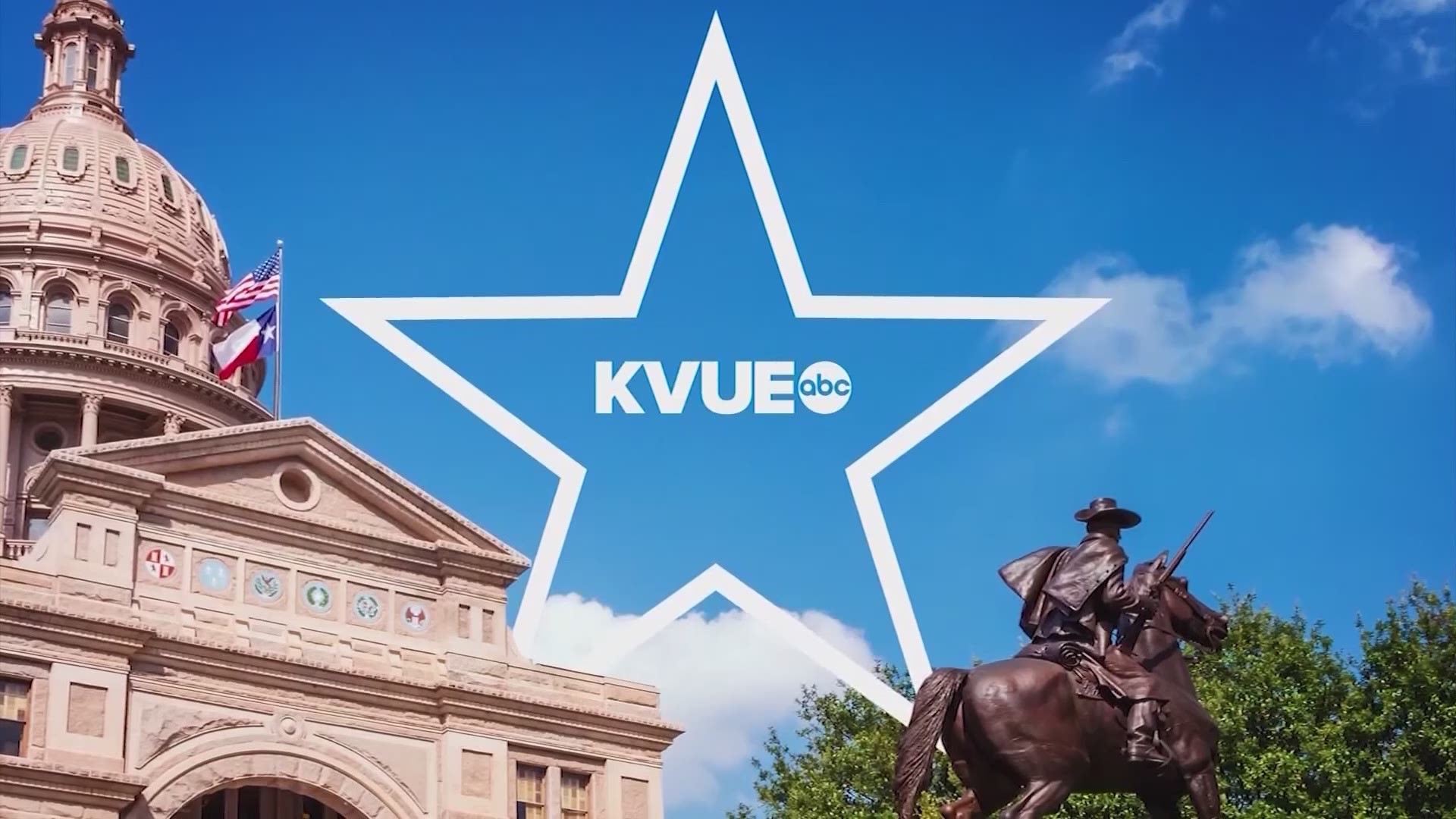 AUSTIN, Texas — Texas lawmakers returned to the Capital City this week for the start of the 87th legislative session. Ross Ramsey, executive editor and co-founder of The Texas Tribune, joined KVUE Political Anchor Ashley Goudeau to discuss what to expect this session.

On Monday, Gov. Greg Abbott toured a vaccination hub in Arlington and gave an update on vaccines coming into the state. A few days later, he announced Texas is the first state in the nation to have administered one million doses of the vaccine.

While that is a significant feat, it also needs context. Eighteen other states and Washington, D.C., have actually vaccinated more people per capita than Texas.

The Texas Legislature convened for its 87th regular session Tuesday. The day's events were filled with the same usual ceremonial pomp and circumstance, but also with some major adjustments.

Because of the coronavirus pandemic, the number of people allowed into the chamber and the Texas Capitol itself was limited. There was mandatory COVID-19 testing for members of the public who wanted to go inside, and you couldn't miss the increased law enforcement presence that was there in the wake of the riots at the U.S. Capitol.

The members of the Texas House of Representatives overwhelmingly elected Beaumont Republican Dade Phelan to lead the lower chamber, making him the 76th speaker in the state's history. The former speaker, Angelton Republican Dennis Bonnen, announced he would not seek re-election after a secretly recorded audio of him making disparaging comments about other members was leaked.

Texas lawmakers have a lot of work ahead of them this session from passing a budget with less money to redrawing district lines and addressing the pandemic.

Ross Ramsey, executive editor and co-founder of The Texas Tribune, joined Ashley Goudeau to discuss what Texans can expect between now and sine die on May 31.

Ashley Goudeau: Ross, good morning. Thank you so much for joining us.

Ross Ramsey: "Good morning. How are you?"

Goudeau: Doing all right. So, it all begins, right? The start of another legislative session. But this one, you know, it's not going to be like a legislative session that we've seen before. So, first, share your thoughts with us about the big things we can expect to see this year.

Ramsey: "You know, the big items on the agenda are kind of normal. They've got a tight state budget. It's not quite as bad as they expected. They have to do redistricting this year, which is redrawing political maps now that we have a new census coming out. They've got to take on a lot of the issues that came out of the racial injustice demonstrations during the summer. They've got to talk about the coronavirus and how far they're going to let a governor go with executive orders and what they're going to do about vaccines and all of that. Those are the big issues that are kind of on the table this time. They have to do it all in the midst of a pandemic. So, things are a little bit strange."

Goudeau: When we think about the different rules that have been in place, I want to first talk about some procedural rules because, you know, the Senate yet again has changed its rules on what it's going to take to bring bills to the floor for a vote. Explain to us exactly what's going on with that.

Ramsey: "They used to have a thing called the two-thirds rule. You had to have 21 of the 31 senators agree to bring a bill up for debate. And the idea was that you'd get some agreement among the senators that they weren't going to spend their time debating things that were – didn't have any support or were a waste of time. As the Republican majority in the Senate has shrunk, the lieutenant governor and the senators have tightened the rules. So, it went from 21 to 19 when there were 19 Republicans in the House. This time, there's only 18, so they changed it again. Now you have to have 18 people to agree to bring something up. It just happens that's the same as the number of Republicans."

Goudeau: Ah, just so happens. Isn't that funny? I mean, you know, obviously, politics is not fair. But, you know, what do you think about this because the Democrats are obviously calling foul on this big time?

Ramsey: "Well, you know, the majority is asserting itself. They've come in and said, you know, 'Look, the voters put a majority of Republicans in the Senate.' It only follows, they would say, that those senators in the majority should have some control over the agenda and shouldn't be blocked from considering legislation by the minority party that couldn't get the support of most of the public."

Goudeau: Now if we talk about the House, obviously, the biggest thing there is that there is a new speaker of the House, Beaumont Republican Dade Phelan. Tell us a little bit about him.

Ramsey: "You know, he's been in the House for a while. He was the chairman of the State Affairs Committee in the House, which handles a lot of really gnarly issues and demonstrates a member's, a chairman's ability to kind of get through tough issues without getting the members cut up or, on the other hand, an inability to do that. Phelan's been pretty good at it. The House coalesced around him pretty quickly as it became clear that the Republicans would retain their majority, and he almost had acclamation. Only two members, two conservative freshman Republicans among the 150 members of the House, voted against him."

Goudeau: So, you've kind of talked about this before, but the coronavirus pandemic obviously has changed, you know, nearly every aspect of our lives. And the legislature simply is not exempt from this. So, the chambers, though, are going to have different rules when it comes to how they're going to keep people safe during the pandemic. The House is more lax than the Senate. Talk to us about what some of those rules are.

Ramsey: "Well, I think these rules are going to change a little bit as the pandemic asserts itself. We've already, at the end of the first week, we're hearing Joe Deshotel, a Democrat from Beaumont, tested positive for the coronavirus after two, two or three days on the floor of the House. So, I think the House might be scratching its head collectively and wondering about this.

Goudeau: So, I want you to look into your crystal ball there and tell me: Do you think this means some lawmakers are going to forgo some of those more controversial bills, filing things that they know get people riled up and cause those rallies at the Capitol, large committee hearings with tons of people that last to the night – do you think they'll skip some of that, knowing that we are in a pandemic and things have to be considered when it comes to safety?

Ramsey: "You know, I think those issues are still going to be in front of the legislature. An easy example of that is redistricting has to be done as soon as they have the census numbers in hand. And redistricting is always a process – political maps and all of that and how we're represented and how voters match up with politicians. That's always the subject of really, really long public hearings. The public really wants to be heard. People that you don't necessarily think of as the public, you know, City officials, County officials, local officials, they want to be heard. It's going to be hard to do all of that. So, some of those big public demonstrations are kind of unavoidable.

I think they're going to be muted, though. And I think there are going to be a lot of cases where the legislature imposes limits on the number of people in a room, on the length of testimony, all of those kinds of things to keep people heard but socially distant. It's kind of a hat trick."

Goudeau: The other thing that we want to explain for folks – because maybe they just don't remember – is exactly how a bill becomes a law in Texas. Give us a rundown of that long process that it has to go through before it makes it to the governor's desk.

Ramsey: "Well, let's say you're a member of the Texas House. You file a bill. All you have to do to file a bill is get it drawn up to look like a bill and say, 'Here's my idea and I present it.' You file it in the House. It goes on to the speaker's desk. The Speaker assigns it to a committee. The committee decides whether or not to hear it. And if they hear it, whether or not to vote on it, and if they like it, they vote it out. It goes back to the full House for consideration. And if the whole House votes for it, it goes over to the Senate and starts the whole process all over again.

Lieutenant governor's desk, a committee, to the floor. If it passes the Senate, then there's a committee that reconciles differences between the House and Senate version and whatever they come up with goes to the governor.

It's designed to be very, very difficult. It's an obstacle course. And in a normal session where you've got, you don't have a pandemic or anything else, they ordinarily file 6,000 or 7,000 bills and pass about 20% of them. So, they'll get 1,600 to 1,800 bills out of there. I would be surprised if they do that many this time. They might file that many, but I'd be surprised if they passed that many. Just going to be a very difficult session in that way."

In this week's edition of The Last Word, Ashley shares her hopes for the 2021 legislative session.