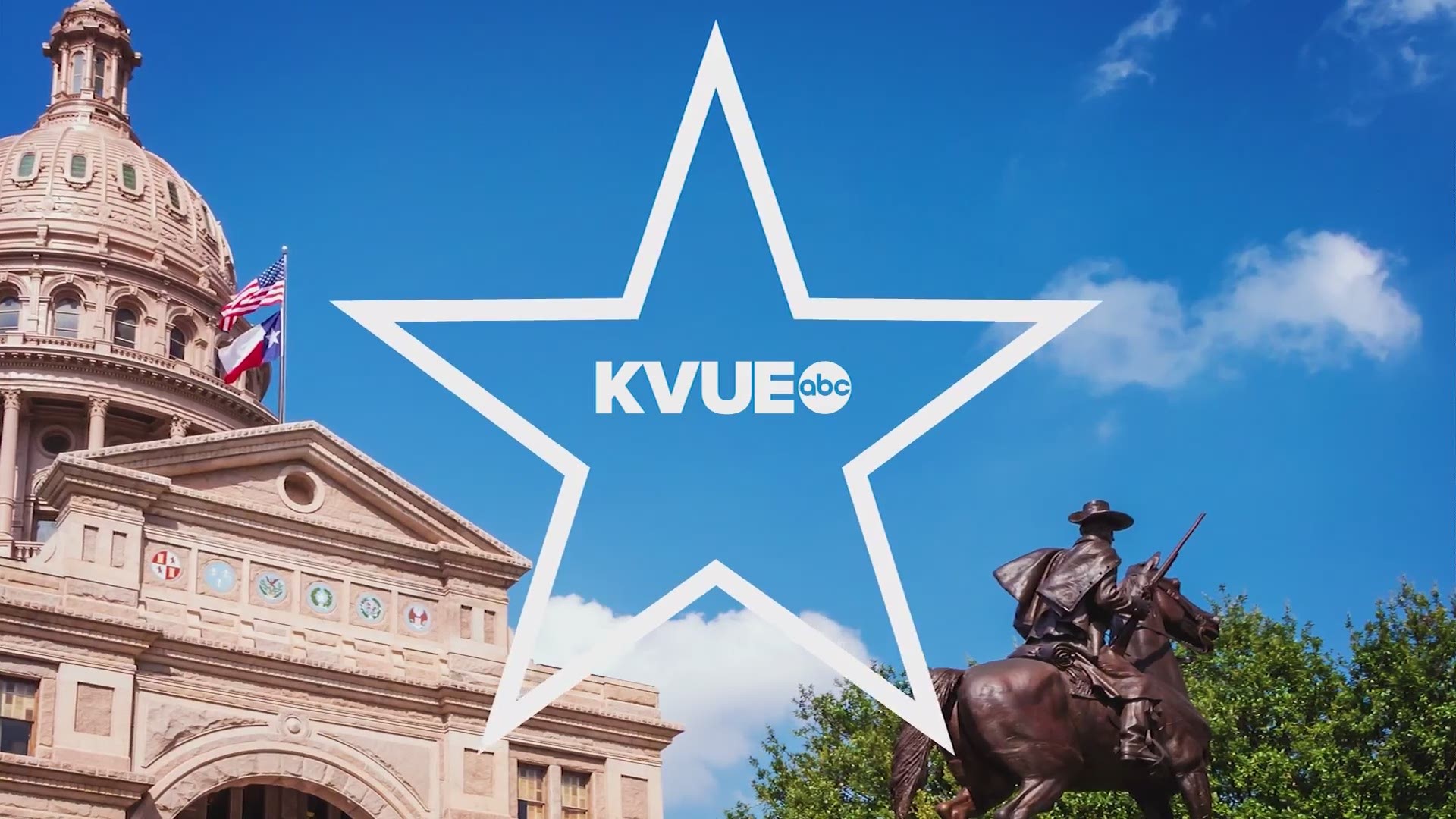 AUSTIN, Texas — President Donald Trump made a trip to Texas, Gov. Greg Abbott is weighing in on the re-opening of schools and Texas voters will have more time to cast their November ballots.

Gov. Greg Abbott issued a proclamation Monday, extending early voting for the November election by nearly a week. Early voting will now start Tuesday, Oct. 13, instead of Oct. 19, and will run until Friday, Oct. 30. Abbott said the extension will give Texans more flexibility as they continue to protect themselves from COVID-19.

President Donald Trump traveled to West Texas on Wednesday. He was greeted by Gov. Abbott before heading to a private fundraiser in Odessa. Afterward, the president toured the Double Eagle Energy Rig in Midland, where he signed four permits allowing pipeline and railway infrastructure on the Mexico border.

The conversation about sending Texas children back to the classroom continued this week. Attorney General Ken Paxton issued guidance, stating that local health authorities can't issue blanket orders to close schools to prevent the spread of COVID-19 but rather can only respond to specific outbreaks.

The Commissioner of the Texas Education Agency then said districts could lose State funding if they only have all-virtual learning for longer than eight weeks. Local health authorities and teacher groups pushed back, but on Friday, the State's top leaders and legislative education chairs released a statement clarifying that under State law and the governor's executive orders, decisions about when and how schools re-open rest with school boards.

A bonus thing to know: The people of Travis and Bastrop counties now have a new State Senator. State Rep. Eddie Rodriguez conceded to former Travis County Judge Sarah Eckhardt in the race to replace Kirk Watson. Eckhardt came within less than half of a percentage point of defeating Rodriguez in the runoff.

Voters in U.S. Congressional District 17 – which includes parts of Travis, Bastrop and Lee counties and then stretches into Waco and Bryan-College Station – will elect a new representative in November.

Republican Bill Flores flipped the seat from blue to red in the 2010 election, but after five terms, decided not to seek re-election.

The Democrat that Flores faced in 2018, Rick Kennedy, is back for another run. This time, he'll face former Dallas-area Congressman Pete Sessions, who now lives in Waco.

Ashley Goudeau: First and foremost, tell our viewers a little bit about yourself and why you're running for Congress.

Rick Kennedy: "Yeah, sure. You know, I was the Democratic nominee for the seat in 2018. I'm running now for the same reasons I ran then. I feel that our divided and dysfunctional Congress no longer serves the needs of the American people or the people of Central Texas. And my partner, Sarah, and I, we've got five teenagers between us. And I've been deeply concerned that we're about to hand off a divided and diminished America to our kids."

Goudeau: You know, as you mentioned, you did run for the seat in 2018. You fell to Bill Flores, the incumbent, at the time. What makes you think voters in District 17 will vote for you this time around?

Kennedy: "Well, things have changed dramatically [in] the last two years. I'm very optimistic. And [as a] matter of fact, I fully expect to win this district [which] may be gerrymandered and designed to elect a Republican, but people everywhere, from Wells Branch to Waco to College Station, are looking at the state of our nation and are deeply unhappy with how Washington has handled the pandemic. And they're demanding change and, from what I'm finding, that demand transcends party lines."

Goudeau: This election, you will face former Congressman Pete Sessions because Bill Flores announced he was retiring. You know, Sessions has a lot of name recognition ... What's your strategy in defeating him?

Kennedy: "There's a lot of skepticism about his candidacy among all the people here in Central Texas. Everybody knows that, you know, he was defeated in 2018. His voters fired him from his seat up in the Dallas area. And, you know, the powers that be, the power brokers and donors literally picked him up and moved him to Waco to vie for his seat to try to get him back into Congress. And again, he had a very hard time getting past Renee Swann in the runoff. And as experienced a congressman as he is, if he was a good congressman, he should have walked away with that easily. People are very skeptical about his candidacy."

Goudeau:  Do you see a problem with the fact that he is now running for the District 17 seat?

Kennedy: "I see a big problem with it, yeah. You know, he didn't even mention the people of Central Texas in his campaign announcement when he said he was going to run. He has pledged his loyalty to his donors, his party and to the president. And I'm just the opposite of that. I pledged my loyalty and my service to the country, the Constitution and the people of Central Texas. He represents the past. He is old-style Washington, he's an insider. And again, his people, his voters in 2018, fired him because he was not using that seniority, that experience, to benefit the lives and livelihoods of his constituents. I plan to do exactly the opposite."

Goudeau: If elected to Congress, what would be your top priority?

Kennedy: "Well, you know, we've got, I've been crisscrossing the district for, you know, three years now between my run in 2018 and this year. And we hear about all of the normal kitchen table issues that we all face with health care, with jobs, with our infrastructure that affect everybody's lives and livelihoods. But we've got to be very realistic in the fact that the pandemic recovery and response, response and recovery are going to dominate the legislative agenda for the foreseeable future. The recent unemployment numbers that we saw, the GDP numbers that we saw, along with his handling of the disease, has resulted in a protracted and widespread outbreak that guarantees there will be no V-shaped recovery.

We need people in Congress who are going to work, just roll up their sleeves and get to work for the people and come up with a long-term plan. That said, that meshes with fighting for a living wage with those at the low end of the income spectrum that we've suddenly determined are essential to our lives and our livelihoods and the very existence of our economy. We need to extend access to every – access to health care to every American. We need to put people back to work as part of this recovery with an infrastructure build. And we certainly need to reinvest in our public education system so that we can have a workforce that will fill the 21st-century jobs that we need to create to dig ourselves out of this."

Goudeau: You know, you talk a lot about divisiveness within Congress and Washington and politics. What would you do to help bridge that gap if you're elected?

Kennedy: "Well, you know, there's two phases to that. There's what I can do personally and then what Congress can do from a legislative standpoint. And personally, the first thing I would want to do is open up the lines of communications with my constituents, not just the constituents who supported me, but even more importantly, with the constituents who voted against me. So, I've pledged to hold no fewer than seven in-person town hall meetings every year that I'm in Congress. And those town hall meetings won't be in, like I said, they won't be in blue areas. As a matter of fact, I've pledged that the first town hall that I hold will be either in the precinct, if that's practical, or in the county that votes most heavily against my candidacy because those are the folks who are most skeptical about how I'm going to represent them. So, we'll open up those lines of communications locally.

Legislatively, I think one of the reasons, the fundamental reason, why we have so much divisiveness, political divisiveness in this country right now, is that districts are so gerrymandered that they're not competitive anymore. So, only fewer than 20% of the districts in the country are considered competitive. I would support all the provisions in what is currently HR 1, the For the People Act of 2019, to reduce or eliminate gerrymandering by requiring states to use nonpartisan citizen commissions to do their redistricting as opposed to partisan legislatures."

Goudeau: Interesting. I want to talk a little bit about the COVID-19 pandemic. As a Democrat, I do want to know, what is one thing you believe President Donald Trump has done well in addressing the pandemic?

Kennedy: "What has he done well? So, there was a period of time back in late March, early to mid-April, where he listened to his subject matter experts and he did what he had to do at that point to try to flatten the curve and we succeeded. He provided the leadership in that in that three, four, five-week period that was necessary to bend the curve and to start to flatten it out. He did not continue providing that leadership, unfortunately. And as we see, the pandemic has rebounded since."

Goudeau: Mr. Kennedy, give us some final thoughts for our viewers about why they should elect you this November.

Kennedy: "I'm going to reiterate something I said before. My opponent has pledged his loyalty to his party, his donors and the president. And he's offering more of the same of what we have right now. And after 25 years of degrading and denigrating the institution that is the House of Representatives that brought us to this point where we've got a federal government that is so divisive and so incompetent that it isn't capable of fulfilling the most basic role of government, which is protecting lives and livelihoods of our people. As I've said, I've put my service to the country, the Constitution and the people of Central Texas. And, you know, as a software engineer, I'm an engineer by training, I look for fact-based, evidence-based, achievable and effective solutions, not necessarily tied to [a] particular ideology. And that would provide the change that people are looking for right now."