Mike Siegel (D) will once again face off against U.S. Rep. Michael McCaul (R) to represent the people of District 10. 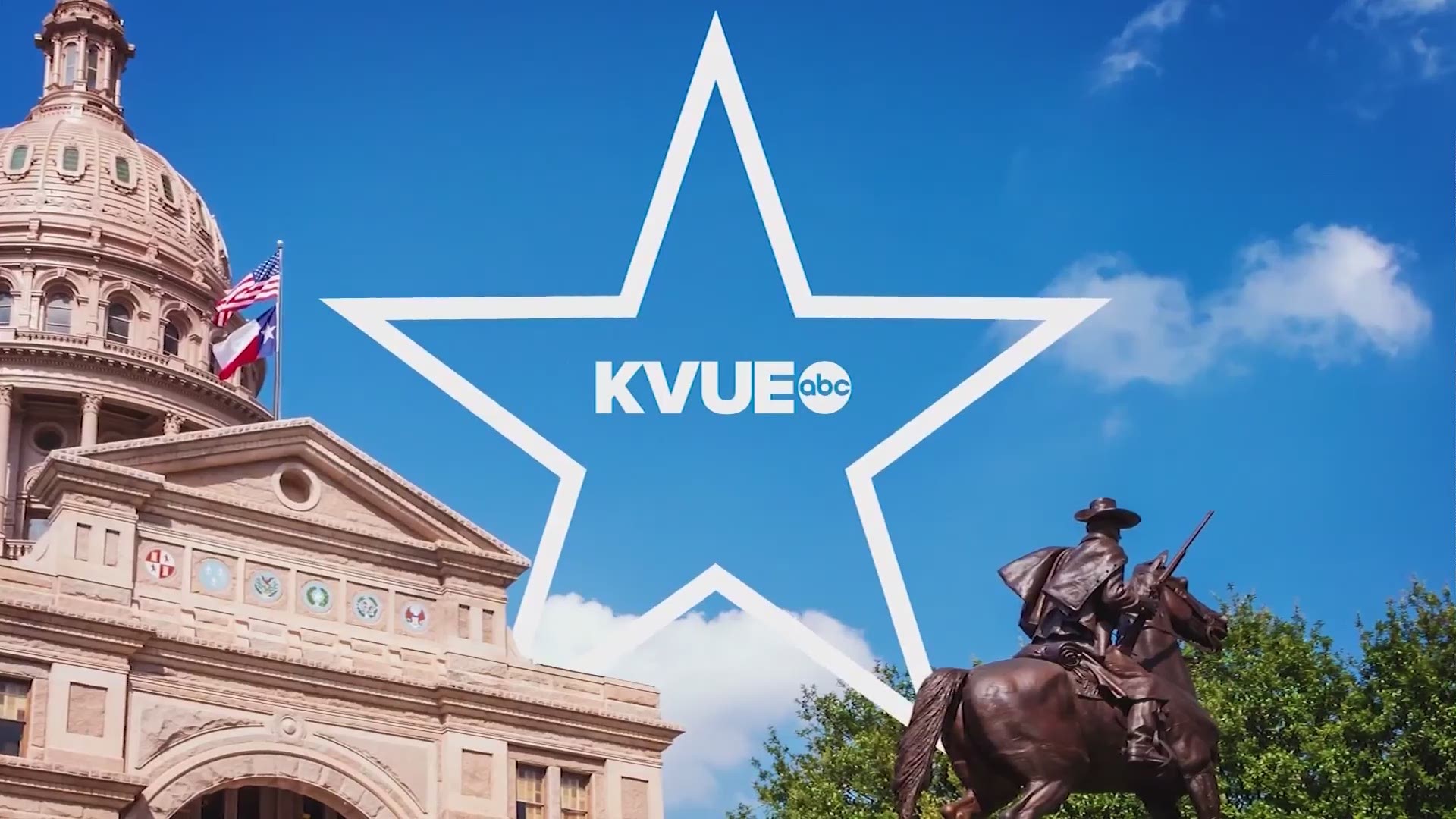 AUSTIN, Texas — Election season is ramping up and if we see a repeat of the 2018 election, many of the races promise to be close.

Tesla has selected Travis County as the site of its newest Gigafactory, slated to be the company's largest facility. The auto assembly plant will be built on more than 2,000 acres off Texas State Highway 130 and Harold Green Road, not far from the Austin airport. Tesla plans to hire 5,000 employees to work at the plant.

State Comptroller Glenn Hegar has a grim prediction for Texas: a budget shortfall of $4.6 billion for the 2019-2020 biennium, the budget cycle we're in now. Back in October, the state's chief financial officer predicted the budget cycle would end with Texas having an extra $2.89 billion – but the COVID-19 pandemic and volatility in oil prices have changed that.

A Texas Supreme Court justice's decision to retire from the bench isn't sitting well with Democrats. After 15 years on the state's highest court, Republican Justice Paul Green announced his plans to retire on Aug. 31 – about a week after the deadline to call a special election. That means Gov. Greg Abbott will appoint a replacement rather than voters electing a new justice.

The November election will be here before you know it. To help you get ready to cast your ballot, KVUE is speaking with candidates running for some of the most important races – including U.S. Congressional District 10, which stretches all the way from Travis and Bastrop counties to West Houston.

Republican Michael McCaul has represented the district in the U.S. House of Representatives since 2005 and is seeking his ninth term. And he'll face a familiar opponent this November.

Siegel joined KVUE Political Anchor Ashley Goudeau to discuss what he believes will be different this time.

Ashley Goudeau: You fell short of defeating Rep. McCaul back in 2018. What makes you think you can beat him in 2020?

Mike Siegel: "Well, we created a tremendous foundation in 2018, turning what was a safe Republican seat into what's now a national battleground race. And so, we've continued to work since 2019 in this campaign. We built an even broader coalition, raised more money, earned national support. And, you know, as of last Tuesday [July 14], emerged from a very tightly contested primary with record turnout. And now we're ready to beat McCall in November."

RELATED: Voter turnout: How many Travis County residents voted in the primary election?

Goudeau: Your opponent has been pretty critical of your policy stances, from your support of the Green New Deal to a universal health care system. He says these policies require massive spending and therefore you're going to have to raise taxes in order to pay for [them]. What do you say to that?

Siegel: "Well, as Democrats, we're fighting for policies that meet the crises we're facing right now. And so, yes, I support universal health care and I support a national jobs program to put tens of millions of Americans back to work. And this is how we should be using our federal resources. Rep. McCaul is in favor of spending trillions of dollars to prop up the stock market and doesn't believe we should be keeping people in their homes and food on their tables. And that's a huge distinction between Democrats and Republicans. We're the party that's fighting for the people and giving the resources that people need most in this critical moment."

Goudeau: Rep. McCaul, and even other Republicans, have gone as far as to refer to you as a "socialist." How do you react to this?

Siegel: "You know, these are the same people that thought Social Security was socialism, that thought Medicare was socialism when LBJ signed it into law. And so, really, it's a sign that we're advocating for programs that are popular with the people. As Democrats, we believe in a strong safety net so that everyone has a fair shot at success in this world. And that's all we're asking for right now. We're in a health pandemic. Everyone should have access to a doctor. We have over 40 million unemployed in this country. The federal government should be guaranteeing jobs. And so, that's what we're fighting for in this moment right now."

Goudeau: When it does come to things like universal health care, like helping with jobs, those are things that are costly. How would you recommend we go about paying for it?

Siegel: "Well, the federal government has the resources it needs to pay for these programs. And it's interesting, Michael McCaul doesn't ask these questions if we're talking about a war or if we're talking about tax cuts for the wealthy. And so, really, we're not in danger of inflation. That's the concern with the deficit. This is not an inflationary moment. This is a time when the federal government needs to be making sure that the people on Main Street have the resources they need. And when you give money to the people, working people, they're not saving that money like the ultra-wealthy are. They're spending that in their community. So, that supports small businesses, that supports an entire ecosystem of families and local community members. And so, we need to be putting an influx of federal resources into the community to make sure that people aren't being evicted from their homes, to make sure they can see a doctor and to make sure everyone has the basics in life. And so, to me, that's a clear distinction between Democrats and Republicans in this moment. Are we going to support business as usual, propping up the stock market and Michael McCaul's friends, or are we going to make sure that the people can survive this terrible moment we're in right now and emerge stronger on the other end?"

Goudeau: We can't ignore the COVID-19 pandemic that we're in, which is probably going to remain with us until November 2020 and long after until we get, you know, a vaccine and more ways to treat this virus. What do you feel needs to be done, a top priority coming from the federal government, in addressing the pandemic?

Siegel: "It's simple. We need to guarantee health care for every American. There was a recent New York Times article – two people in Austin went to get a COVID-19 test. One paid cash [and] was billed $200; the other offered insurance and was billed $6,000. I mean, how obscene is that? That, in this moment when we need to get tested to make sure we're not spreading the virus, that there are these immense barriers to even doing the most basic thing to stop the spread of COVID-19? And so, we should, of course, be expanding Medicaid to every state. It's absurd that Texas has refused Medicaid expansion. We just stopped the attacks on Obamacare that McCaul himself has supported. He's proudly talked about voting dozens of times to cut Obamacare, the Affordable Care Act. And we need to be making sure that we have a strong federal program to make sure that everyone in this country can see a doctor, can go to a hospital and can see a specialist when the time comes."

Goudeau: If elected to Congress, what will be your top priority?

Siegel: "You know, I think at the top of the agenda needs to be protecting our democracy. With all of these attacks on voting rights, whether it's gerrymandering or voter suppression, I want to see us pass, in January 2021, the John Lewis Voting Rights Act to restore democracy, to restore the Voting Rights Act across the country, to make sure that states like Texas cannot suppress the vote of our community. Because that's the foundation. The right to vote is the most fundamental right in a democratic society. And from there, once we protect the right to vote, we can move on to create a massive jobs program, to guarantee health care and to address the other crises that we're facing in this moment."

Goudeau: When you speak about protecting the right to vote, are there particular roadblocks or programs that you would like to get rid of or see changed?

Siegel: "Yes, certainly, Ashley. Well, right now, in a health pandemic, the idea that we don't have the choice of voting by mail – which is something that would simultaneously protect public health and our democratic rights – is obscene. And so, I would like to see universal access to vote by mail. I would like to see universal programs to make voter registration extremely easy, whether it's same-day voter registration and other programs like online registration. I'd like to see Election Day become a holiday so that working-class people don't have to choose between collecting a paycheck and exercising their constitutional right to vote. We also need to address gerrymandering and the influence of money in politics. But we really need to get back to protecting our democratic rights, make sure everyone in this country has the right to vote, the ability to vote and has a voice in our political process."

Goudeau: Mr. Siegel, I'll ask you if you have any final thoughts for our viewers about why they should cast their ballots for you this November?

Siegel: "Right on! So, I'm running in Texas 10, a district with immense needs and big concerns. We've lost three rural hospitals in 10 years. We have problems with air quality and water quality in the rural areas. We've got a Houston region that still doesn't have adequate flood control and all these people without access to a doctor. And so, I'm going to be a candidate that fights for the people. I'm thankful that my two opponents in the Democratic primary, Pritesh Ghandi and Shannon Hutchison, are going to be supporting my campaign. And we're committed to replacing Michael McCaul and restoring real representation in this district. "