A letter and poll from Texas Representative Kyle Biedermann to Islamic leaders and mosques across Texas is sparking controversy. The letter aims to polls their religious beliefs. 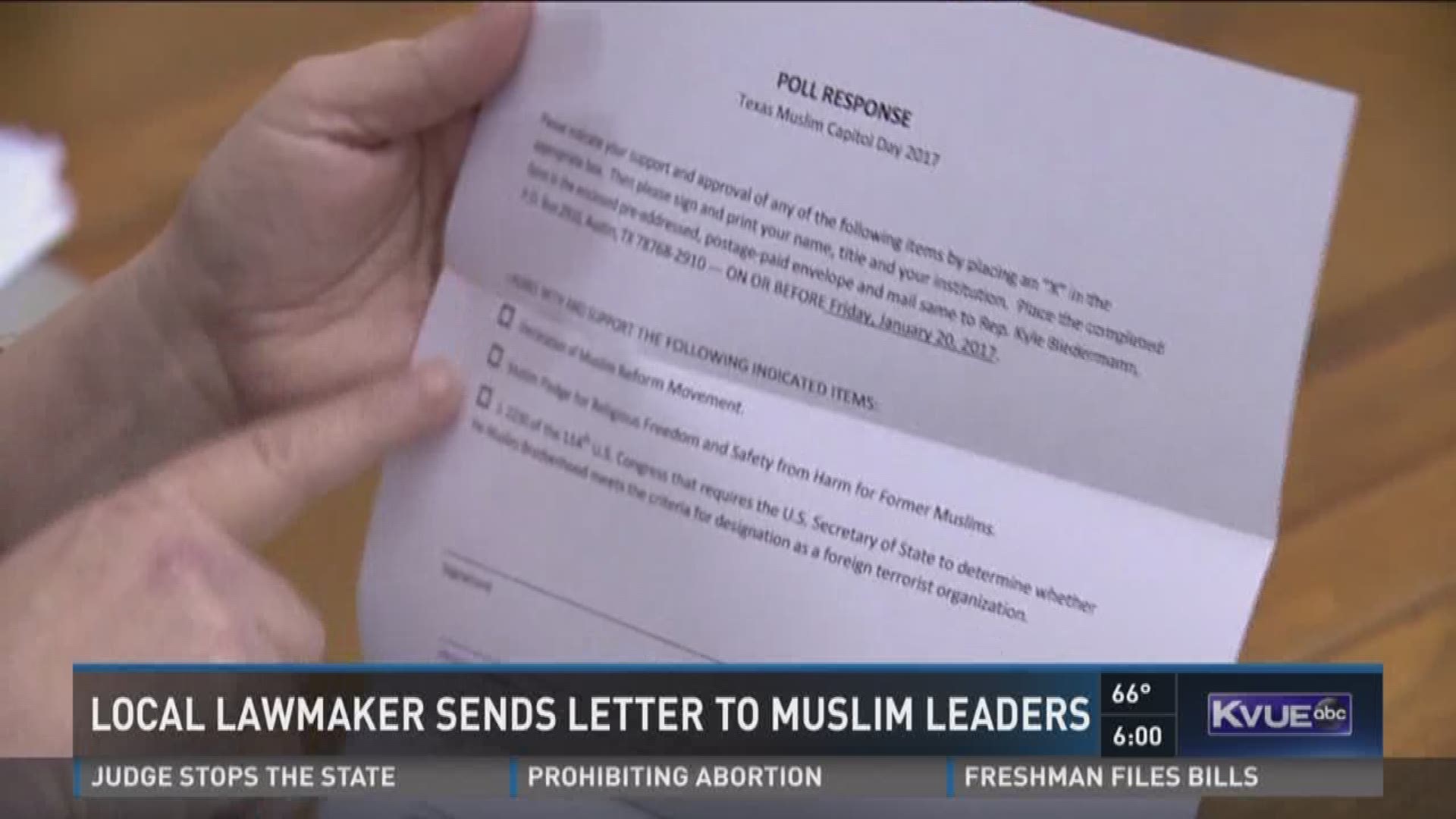 A letter in an envelope marked 'Urgent Reply ASAP' is sparking controversy across Texas.

"I woke up at 6:45 on Monday morning and the very first text was a text from somebody saying 'hey have you seen this thing? What should we do,'" said Bee Moorhead, Executive Director for Texas Interfaith Center for Public Policy and Texas Impact.

The Texas Interfaith Center for Public Policy lobbies for religious concerns shared among all Texas religious and faith groups.

"There's nothing official about it except that an official sent it," Moorhead said.

The letter is signed by Freshman Texas Representative Kyle Biedermann (R-New Braunfels), the president of the American Islamic Forum for Democracy and the Director of the Former Muslims United, Incorporated.

The first line reads, "In connection with Texas Muslim Capitol Day 2017..." and it goes on to say Biedermann and the organizations are conducting a poll, the results of which they will share with Texas elected officials.

"Well they don't actually have any connection to Muslim Capitol Day, which is an event organized by CAIR, the Council on American Islamic Relations," she explained.

The letter then talks about Sharia law and whether Muslims Americans think it should be the law of the land or the U.S. Constitution.

"Sharia law is sort of this all-encompassing, confusing word that's thrown out a lot," explained Imaad Kahm, Policy Analyst for Texas Impact. "What it is is a belief system that all law is based on. And so you have a lot of different rulings based on how Muslims interpret God's will."

"If you actually look at Sharia law, for Muslims living in other countries, according to that law they should actually obey the laws of that country," he added.

Then there's the poll that asks if they agree with or support doctrine that, according to Kahm, is not widely known among the Muslim community and causes separation.

A piece of that doctrine is the Declaration of Muslim Reform Movement was written in May 2016 by one the the men who signed the letter, M. Zuhdi Jasser, M.D. President of the American Islamic Forum for Democracy and co-founder of the Muslim reform Movement.

Jasser lives in Arizona but spoke to KVUE's Ashley Goudeau over the phone.

"After our Muslim Reform Movement got together, had its first summit in December 2015, we wrote the declaration and basically in that declaration laid out what we believe to be the defining elements that radicalize Muslims," Jasser said.

"We sent that declaration in May of last year to every mosque, we have done this before. It was signed by 15 Muslim leaders of organizations not only in the U.S. but in Canada and Europe," he added.

Jasser said he did not receive many responses to the letter or the declaration and including it in the poll sent out would allow them to collect data.

"So when I was contacted by the representative's office that wanted, they had a Muslim day happening and what should be the response I gave the same response that I've given to the Senate and to the House in my testimony last year I testified to Senator Cruz's sub-committee on counter-terrorism and oversight and in that subcommittee I testified about how our declaration should be used as a foundation to separate Muslims that are part of the solution of radicalization versus those Muslims that are really part of the problem," Jasser said.

The poll also asks if they agree the Muslim Brotherhood should have looked into the doctrine to determine if it meets the criteria of a foreign terrorist organization.

"Asking the Muslim community whether they support these sort of fear mongering ideas is very divisive," said Kahm. "It actually discourages Muslims who are coming to the Capitol. Muslims in Texas who are trying to exercise their right of democracy and free speech."

Moorhead says it's not only discouraging, but intimidating.

"There's no official quality to the survey, there's no reason that anybody needs to respond to it. There's no responsibility anybody has to tell anybody that information, but receiving it that way creates a very intimidating situation for people who aren't sure, who maybe are already a little bit concerned about their position in the community because we're already had so much anti-Islamic sentiment nationally and in Texas," Moorhead said. "So it's intimidating. it's misleading in the sense that it makes seem like it's somehow connected to their event when they didn't think that it was. And it's kind of calculated to make people feel nervous about government which is unbelievably inhospitable for any legislator in the state."

"They're trying to deceive you and ignoring what the letter is about. The letter asks them do you agree with the Muslim Reform Movement Declaration that was signed by 15 Muslim organizations and checking a box is not intimidation. It's whether you support it or you don't So if they're doing the Muslim Day where they're trying to, in many ways, they're intimidating representatives saying they are a community that need to be represented and are ignored, et cetera," Jasser said.

While the letter states the upcoming day is the purpose, Representative Biedermann made no mention of the event in his emailed response about the letter sent out by his staff. His statement reads:

“When I took office, I assembled a Law Enforcement & Homeland Security Advisory Council. The number one priority of the advisory council has been border security, and keeping Texas strong and secure. The poll that went out was paid for with private funds and was sent out to gather responses in advance of my upcoming Homeland Security Summit. Texans of all backgrounds and religions are invited to contact our office to improve both Texas' border and overall homeland security."

Essentially what he's asking them to do is to take a loyalty pledge. What all of these documents and his three questions, what they have in common, is they are a measure of how loyal somebody would be to Islam versus the United States and the American government," said Moorhead.

"I'm Presbyterian, am I going to get one of those next? We have people who are United Methodist, Lutheran, Episcopalian, Jewish. At times all of those groups have been in conflict with the policies of the country or have been in a position of needing to become assimilated in one way or the other. Does that mean that everybody is fair game for a witch hunt," Moorhead added. "It's not, it's just frankly not the representatives business to go target one particular group and quiz them about their loyalty to America and their beliefs about their faith. That's what freedom of religion is all about."

Letter to TX Mosques From Rep Biedermann by kvuenews on Scribd