In a 78-64 vote, the House Friday passed a pared-down version of priority GOP legislation to place new restrictions on voting. 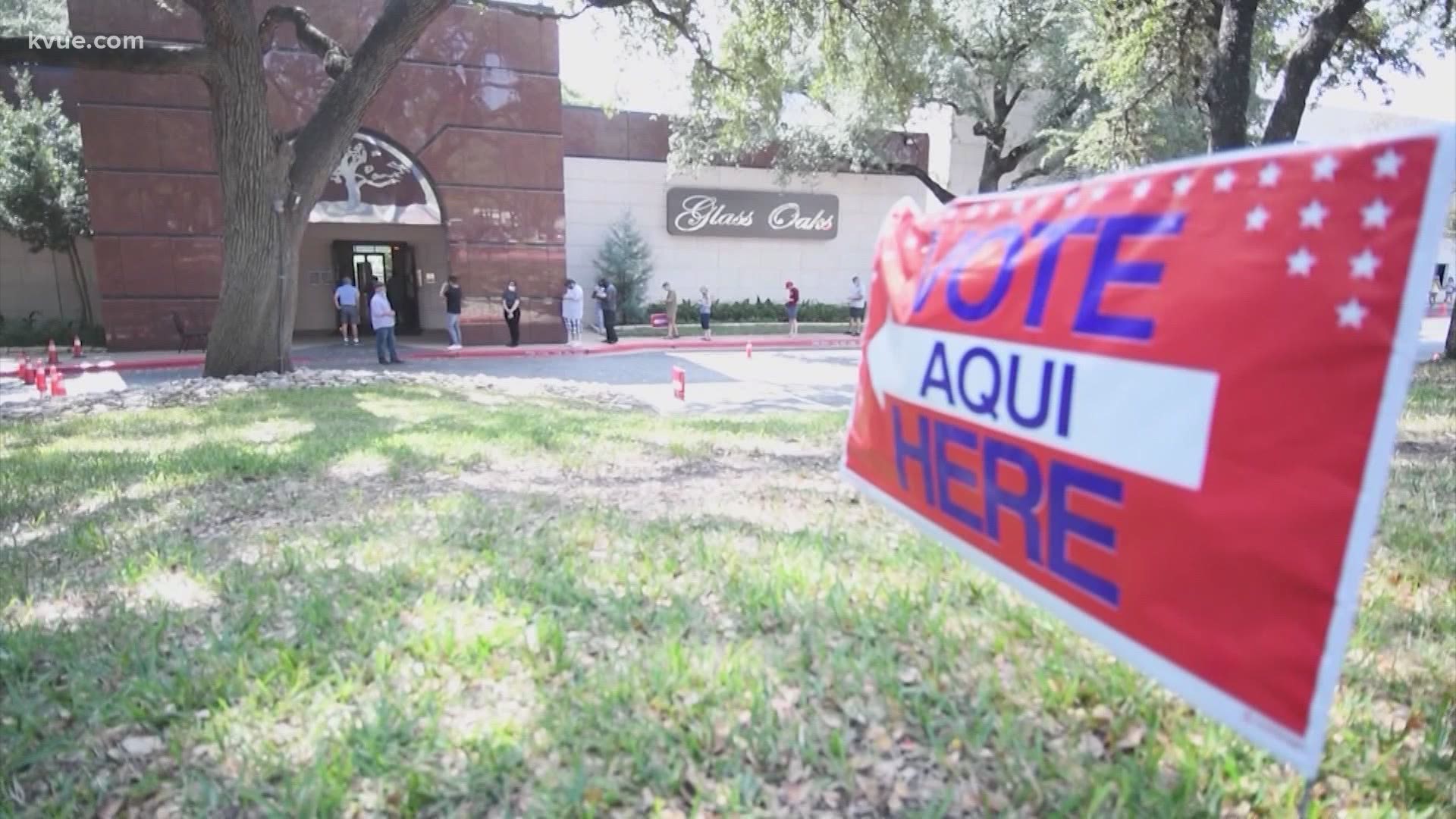 The House Friday gave final passage to a pared down version of Senate Bill 7, leaving out various far-reaching voting restrictions that have prompted widespread outcry from voting rights advocates, advocates for people with disabilities, and local officials in the state’s biggest counties. The legislation still contains some provisions opposed by those groups — including a prohibition on counties sending unsolicited applications to vote by mail.

Facing more than 130 proposed amendments from Democrats when the bill first came to the floor Thursday evening — and a procedural challenge that could have delayed the entire bill’s consideration — lawmakers huddled off the chamber’s floor throughout the night to cut a deal and rework SB 7 through a flurry of amendments passed without objection from either party around 3 a.m.

But the final contours of the bill remain uncertain.

With a 78-64 vote to give it final approval, the bill now heads back to the Senate. It will then likely go to a conference committee made up of members of both chambers who will be able to pull from both iterations of the legislation in crafting the final version largely outside public view.

SB 7 has emerged as the main legislative vehicle for changing the state’s voting rules, though the versions passed in each chamber differ significantly.

As passed in the Senate, the legislation restricted early voting rules and schedules to do away with extended hours and ban drive-thru voting. It also required large counties to redistribute polling places under a formula that could move sites away from areas with more Hispanic and Black residents.

Those and other provisions fell off when it was reconstituted in the House Elections Committee, with little notice and without a public hearing, to match the House’s priorities contained in House Bill 6.

As the clock turned from Thursday into the early hours of Friday, lawmakers spent more time privately working to strike a deal to keep the bill on the floor than they did debating it.

As part of that effort, Republicans further amended the bill to remove a provision that would have required people assisting voters to disclose the reason a voter might need help — even if for medical reasons or because a voter has limited English proficiency. That measure raised concerns among advocates for people with disabilities that it could violate the federal Americans with Disabilities Act, and groups with a long history of fighting state voting laws later found to be discriminatory said it would target voters of color who are more likely to need assistance. Lawmakers also amended the bill to slim down provisions that broadly enhanced protections for partisan poll watchers and provisions that boosted penalties for voting related offenses.

"This bill took a lot of work. We've heard ideas from many members and constituents," said state Rep. Briscoe Cain, the Deer Park Republican who is shepherding the bill through the House, noting those amendments to the bill were crafted based on feedback from advocates for people with disabilities and the Texas chapter of the NAACP. "This bill protects every single Texas voter."

Under the deal House members cut to keep the bill on the floor, Democrats were able to tack on several amendments to the legislation. Most notably, they added language to the legislation in response to the controversial illegal voting conviction of Crystal Mason, a Tarrant County woman facing a five-year prison sentence for casting a provisional ballot in the 2016 election. Mason was on supervised release for a federal conviction at the time and said she didn’t know that made her ineligible to vote. SB 7 was amended early Friday to require judges to inform someone if a conviction will prohibit them from voting and require that people know why they are ineligible for an attempt to vote to count as a crime.

House Republicans’ procedural strategy to rewrite the bill in committee helped it move quickly through the chamber. Despite that revision and the amendments added during the floor debate, the House could ultimately embrace some of the more restrictive provisions in the original Senate legislation — and drop the language added by Democrats — when the bill goes through a conference committee.

With Republicans in full control of state government, the legislation is at the forefront of their broader efforts to further restrict voting after the state saw the highest turnout in decades in 2020. In Texas and nationally, those efforts have been largely rooted in baseless claims of widespread voter fraud for which there is virtually no evidence. In backing the measure earlier this year, Gov. Greg Abbott — who deemed “election integrity” a legislative priority — conceded he was unaware of instances of fraud that had upended an election in 2020. And one of the state’s top election officials told House lawmakers at a previous committee hearing that “Texas had an election that was smooth and secure.”

Without the votes to block the bill, House Democrats seized on that lack of evidence for widespread fraud in questioning Cain when debate began Thursday evening.

“What are we trying to fix here that is not broken?” state Rep. Jessica González, a Dallas Democrat, asked.

“We don’t need to wait for bad things to happen to try to secure our elections,” Cain responded, arguing that the legislation was not a response to the 2020 election. A Trump supporter, Cain helped the former president’s campaign as it worked unsuccessfully to overturn the results of the election in Pennsylvania.

Cain, who struggled at times early in the debate to defend the measure, described it as one of “voter enhancement” and not voter suppression as Democrats raised in their questions. Throughout the 2021 legislative session, Republicans have attempted to label their legislation as race-neutral measures not meant to discriminate, in part because they argue the voter rolls are “color blind,” meaning voters don’t list their race or ethnicity when they register.

But both the original SB 7 and the original provisions of HB 6 were opposed by civil rights groups who raised the prospect that the legislation violates federal safeguards for voters of color. Republicans’ efforts to further restrict voting in the state come as their presidential margins of victory continue to thin and Democrats drive up their votes in diverse urban centers and growing suburban communities.

The House's debate on the bill set up a familiar faceoff when it comes to voting restrictions between Republicans, the vast majority of whom are white, and Democrats, most of whom are people of color. Like in the Senate, the measure advanced without any Democratic votes.

When lawmakers returned to the chamber later on Friday to vote on the bill's final approval, Democrats stood together at the front mic to take turns in speeches opposing the legislation, harkening to the state's long history of enacting voting restrictions — including some in the last decade — that were found to intentionally discriminate against Hispanic and Black voters.

"Let me tell you what suppression looks like — it looks like firing back at [Harris] County Judge Lina Hidalgo and former county clerk Chris Hollins who braved to increase access to the ballot box for all, and instead of applauding them for assisting and increasing the participation of Texans in the process, we filed this bill," said state Rep. Jasmine Crockett, D-Dallas. "Suppression looks like Black, brown and disabled people telling you to your face that this policy will affect them in a negative way and allowing them to fall on deaf ears."

Dallas Democrat Rafael Anchía zeroed in on a section of the bill laying out its purported purpose as one that would “preserve the purity of the ballot box,” which Cain explained he had pulled from the state Constitution.

"SB 7 rode into the Texas House cloaked in that longstanding pretext ‘purity of the ballot box’ that has denied full participation of African Americans and Latinos for generations,"Anchía said.

The bill was ultimately amended to remove that language.

Like with previous voting restrictions passed by the Legislature, the fight over new restrictions is likely to quickly move from the Capitol to the federal courts. On Friday, state Rep. Trey Martinez Fischer, D-San Antonio, noted the revisions to the bill simply took it from "very ugly to just ugly."

"You may have your votes, you have your majority. But guess what, I look forward to seeing you in federal court," Martinez Fischer said. "So please do not delete any emails."

WATCH: Companies speak out against 'election integrity' bills in Texas