The bill would create a doctor-patient relationship between a baby who survives an attempted abortion and the doctor performing the procedure. 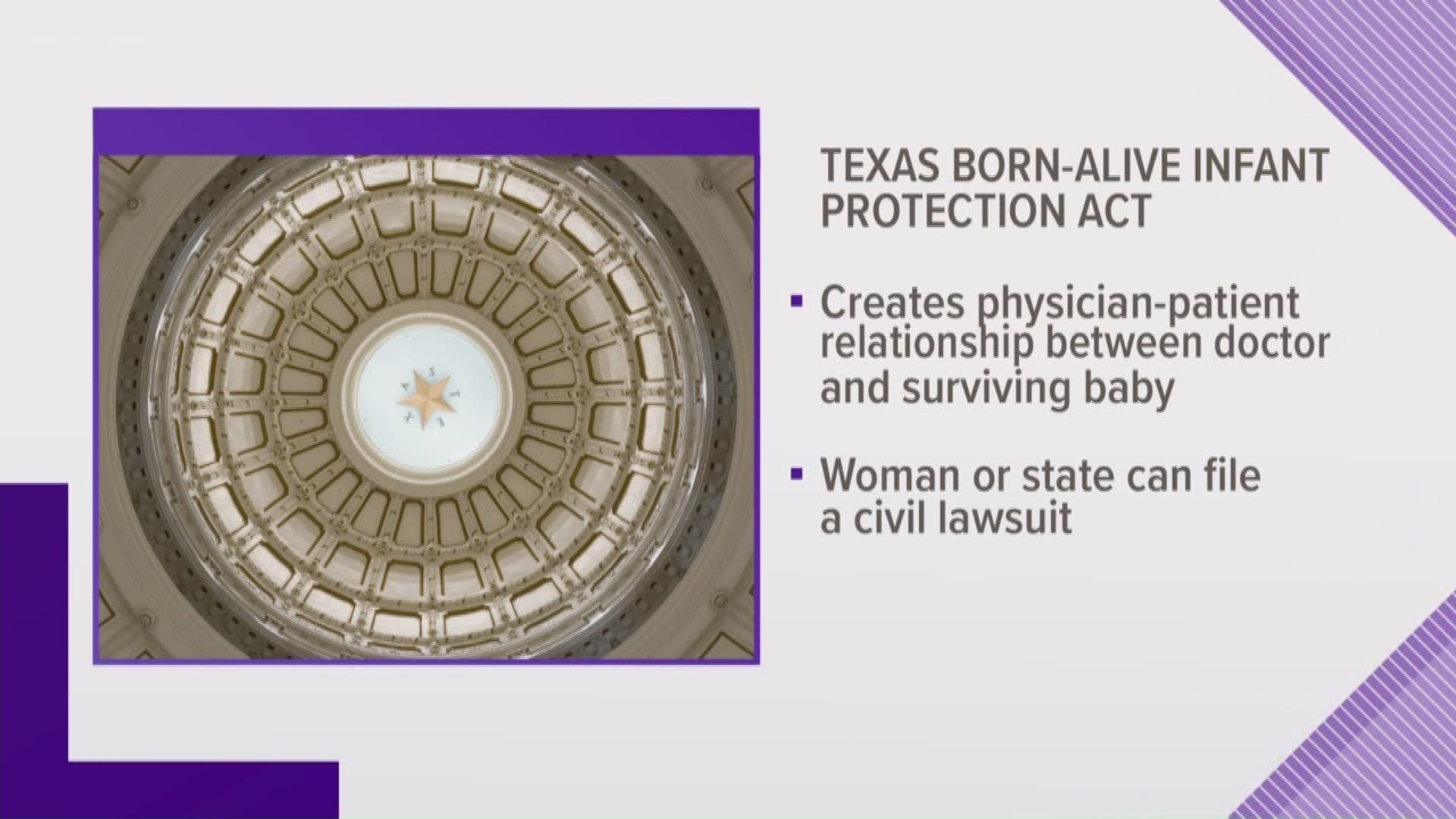 AUSTIN, Texas — The Texas House on Tuesday gave its preliminary approval to House Bill 16 (HB 16), known to some as the "Texas Born-Alive Infant Protection Act." It was formally passed on Wednesday.

In short, HB16 creates a doctor-patient relationship between a baby who survives an attempted abortion and the doctor performing the procedure. It is similar to Senate Bill 23, which the Senate passed, but a little different.

Together, the bills could impose a $100,000 civil fine on abortion providers if they don’t care for a baby that is born alive during an attempted abortion procedure.

"What we have recently seen in Virginia, New York and Washington, D.C., should shock the collective conscience of our nation," said Rep. Leach. "The callous disregard for human life and the refusal to stand against infanticide exhibited by many elected leaders cannot go unanswered. With the passage of the Texas Born-Alive Infant Protection Act, the Lone Star State is sending a clear message that we will not remain silent and we will not rest in the fight for life. As the author of House Bill 16, I am proud to join my colleagues in setting in stone the strongest protections in the Nation for babies who survive abortion and, along with them, invite and encourage pro-life legislators in other states to follow Texas’ lead.”

The House bill earned the support of many Republican politicians, with 81 representatives signing on as sponsors.

However, the bill is not without its opponents.

“HB 16 is a blatantly false, inflammatory and dangerous bill being pushed by anti-choice organizations to further stigmatize abortion, intimidate physicians and, once again, interfere with a woman’s right to seek medical care," said Dyana Limon-Mercado, interim executive director of Planned Parenthood Texas Votes. "The medical community, including the American College of Obstetrics and Gynecologists, strongly opposes HB 16. We want to thank Rep. Donna Howard and the 50 members of the Texas House who refused to vote for this bill."

"There’s a reason the federal version of this bill failed to pass and why national medical organizations oppose this bill, and that’s because HB 16 is not about medicine, it's a bill based on lies and fear mongering. It promotes a false narrative intended to criminalize doctors and demonize physicians who perform abortions. This intentional inaccuracy subjects healthcare providers to potential violence and harassment and unnecessary investigations and prosecution by pushing a false narrative about the practice of medicine.

To be absolutely clear, no one supports infanticide or physicians not practicing medicine to the best of their ability and training – infanticide is already illegal and being in favor of access to abortion or against this bill is not an equivocation of being supportive of infanticide. This bill only applies to doctors who perform abortion and does nothing to improve the healthcare of any infant. This bill is a solution in search of a problem, and to call it anything else would be simply untrue.

We thank Representative Donna Howard, a medical professional and champion for women’s health, for speaking on the true intent of this bill."

The ACLU of Texas released the following statement:

“HB 16 is not about medical care – it is instead the legislature’s latest attempt to limit women’s access to safe and legal abortions by intimidating physicians who provide crucial abortion care through politically motivated investigations and lawsuits instigated by the attorney general. The bill is based on a false premise: since the state started tracking this statistic in 2013, there have been zero cases of an abortion resulting in a live birth in Texas. However, if such an extremely rare situation were to occur, existing law already makes clear that any doctor who strays from the current standard of care would face the same penalties as any doctor who neglects a newborn. The actual intent of HB 16 is to distort public perception of safe, legal abortion care and unfairly target those who provide it in order to further restrict access.”

During public testimony of the bill, three abortion survivors shared their stories revealing the impacts they believe HB16 could have on infants born alive during an abortion.

The bill is designed to increase protections to infants who survive abortion procedures by creating a physician-patient relationship between the physician and the surviving infant at the time of birth, thus requiring high standards of medical care to the baby. HB16 creates statutory civil causes of action to pursue against the physician, in addition to criminal penalties, if the physician fails to provide appropriate medical attention to the child. It also provides a system by which a person who has knowledge of a physician's failure to do so can report them to the Office of the Attorney General. The bill outlines strong protections to ensure a woman who seeks an abortion is shielded from any liability in accordance with existing state law.

The final vote was 94 for, two against, and 49 present not voting. While some Democrats did vote for the bill, others contend what the bill is legislating against doesn't happen and it's illegal if it did.

Storm Timeline: When & where to expect severe storms Wednesday