In a surprising turn, Texas House opts to delay consideration of sales tax swap legislation until 2021

Gov. Greg Abbott and other legislative leaders endorsed the sales tax increase, intended to help fund ongoing cuts to school district taxes. But it has been effectively killed this session. 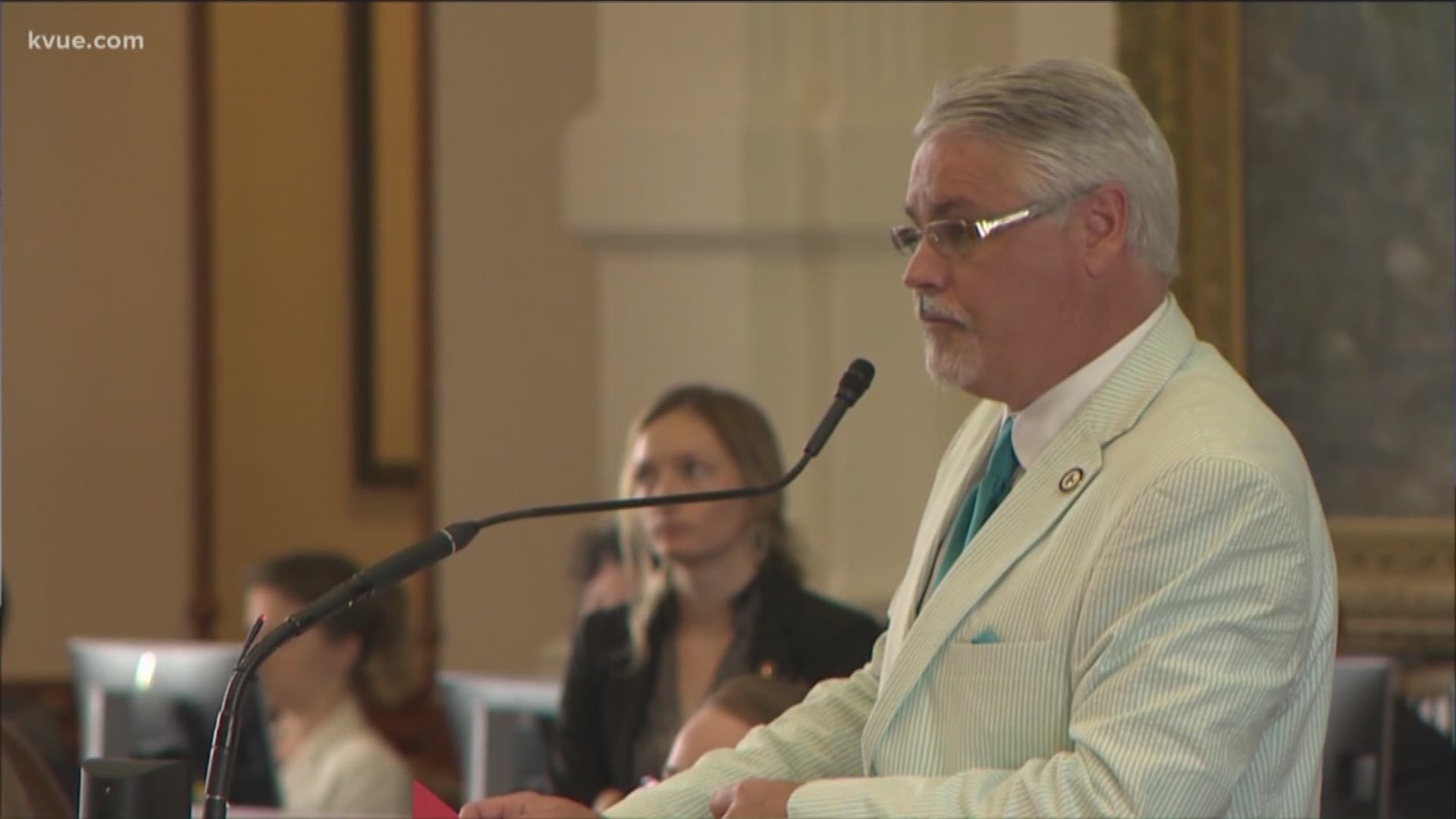 THE TEXAS TRIBUNE – A proposal to pay for long-term school district tax cuts by raising sales taxes, endorsed by Texas' top three political leaders, could be dead after the House delayed a vote on it Tuesday.

State Rep. Dan Huberty, the top public education leader in the Texas House, tabled until 2021 — the next legislative session — House Joint Resolution 3 and the accompanying House Bill 4621, which would ask voters to increase the state sales tax by one penny to buy down school district property taxes. The Houston Republican's move came the day after the Senate, headed by a lieutenant governor who had endorsed the proposal, stripped such a provision from its version of the school finance bill in what was perhaps a signal that the measure would be dead in the upper chamber anyway.

Despite Tuesday's postponement, the idea could still be revived this session; lawmakers could use a different bill as a vehicle to fund school district tax cuts.

Huberty criticized members of the Senate on Tuesday who “have spent their whole careers calling for property tax relief” but did not vote for the school finance measure the day before. And he repeatedly affirmed questions by House colleagues that suggested state Sen. Paul Bettencourt, the Houston Republican who leads the upper chamber’s property tax committee, had failed to take responsibility for coming up with a viable mechanism for property tax cuts when he was part of a school finance commission last year and during the current legislative session.

Bettencourt has arguably been the most vocal GOP senator opposed to the tax swap proposal, a position that has caught some by surprise since he’s closely aligned — both personally and professionally — with Republican Lt. Gov. Dan Patrick, who has made clear he supports the measure. Bettencourt marked himself “present, not voting” on the school finance bill Monday, while the majority of the upper chamber approved the legislation. And on Tuesday morning, ahead of business in both chambers, Bettencourt took to Facebook to once again reiterate his opposition to the tax swap, saying there is “simply no need to raise taxes even higher.”

Gov. Greg Abbott, Patrick and House Speaker Dennis Bonnen — considered Texas’ “Big Three” GOP leaders — have in past weeks thrown their full support behind a proposal to pay for long-term decreases in Texans’ tax bills by raising the state sales tax by 1 percentage point, which would raise about $5 billion a year. The proposal has so far been moving through the Capitol in the form of a joint resolution, which needs two-thirds of each chamber to pass. If the Legislature passed the resolution, the sales tax swap would then land on the November ballot for voters to decide.

In a statement Tuesday afternoon, Abbott said through a spokesperson that his office is "continuing to work with the House and Senate to deliver meaningful property tax relief to Texans." Patrick did not immediately return requests for comment Tuesday.

Because school districts levy the majority of property taxes in Texas, many lawmakers have been seeking ways to help reduce those portions of Texans' tax bills. But since the state is required to ensure school districts have enough money to educate students, any effort to cut taxes would have a significant cost — requiring the state to reimburse schools if they're unable to collect enough from local property taxes.

On Tuesday morning, before the House gaveled in for the day, Bonnen told House Republicans during a caucus meeting that there would be no point in bringing up the proposal for a vote in the lower chamber if it was considered dead in the Senate, according to multiple people who were at the gathering. Caucus members at the meeting, according to those sources, largely agreed with Bonnen, who said the Senate stripping such a provision from its version of the school finance bill Monday suggested the upper chamber couldn’t muster enough support to approve a tax swap proposal.

After Huberty postponed the tax swap legislation, a Bonnen spokesperson said in a statement that the proposal had been "an opportunity for lawmakers to further reduce property taxes" and sustain tax relief found in the lower chamber's school finance bill.

"Speaker Bonnen believes it is in the House's best interest to devote the limited time left in session to our Day One priorities — passing legislation to provide meaningful school finance and property tax reform for all Texans," the statement read.

Perhaps the first major public blow to the Big Three’s tax swap proposal happened Friday, when state Rep. Chris Turner, a Grand Prairie Democrat who chairs his party’s caucus, told The Texas Tribune there were more than 60 “hard no” votes from members against it. That is enough opposition to block the House from passing such a constitutional amendment, which requires at least 100 votes in the House. And on Monday evening, the night before Tuesday’s scheduled debate, Turner and several other House Democrats in leadership positions, signed on to a letter addressed to Huberty that made clear they “cannot support HJR 3 or any other proposals to increase the state sales tax.”

Democrats’ opposition to the proposal centers on the fact that the sales tax is regressive, meaning it takes a bigger portion of income from poorer Texans than richer ones. An official analysis of the economic impacts of HJR 3, which first circulated Friday, showed that the average Texas household making less than $100,000 would expect to see an increase in its annual tax bill. The average household making $100,000 and up would see a lighter annual tax bill.

The future of the sales tax proposal, which state leaders first endorsed in April, appeared especially fraught after the Senate signaled it was backing away from the idea during a debate on its school finance legislation, House Bill 3. That bill originally included billions of dollars in mechanisms to cut school district taxes, contingent on a form of long-term funding, such as the percentage-point increase in the sales tax. State Sen. Larry Taylor, R-Friendswood, the school finance bill’s author, instead stripped the sales tax swap from HB 3Instead, the upper chamber voted to create a Tax Reduction and Excellence in Education Fund to pay to lower school district taxes. A Senate working group came up with a plan to get about $3 billion from a few sources, without raising taxes, including diverting money from the severance tax on oil and gas extraction and collecting money from an online sales tax.

"The bill before us today has no linkage to the sales tax and is not contingent upon a sales tax," he told fellow senators Monday, hours before he successfully moved to pass the school finance bill.

Beyond the tax swap proposal, Huberty told reporters Tuesday after delivering his remarks that he’s still hopeful the two chambers can reach a compromise on the school finance bill. He also said he supported some of the Senate’s other ideas for long-term revenue to cut school taxes.