The bills come as Austin is working to develop updates to its strategy to address homelessness. 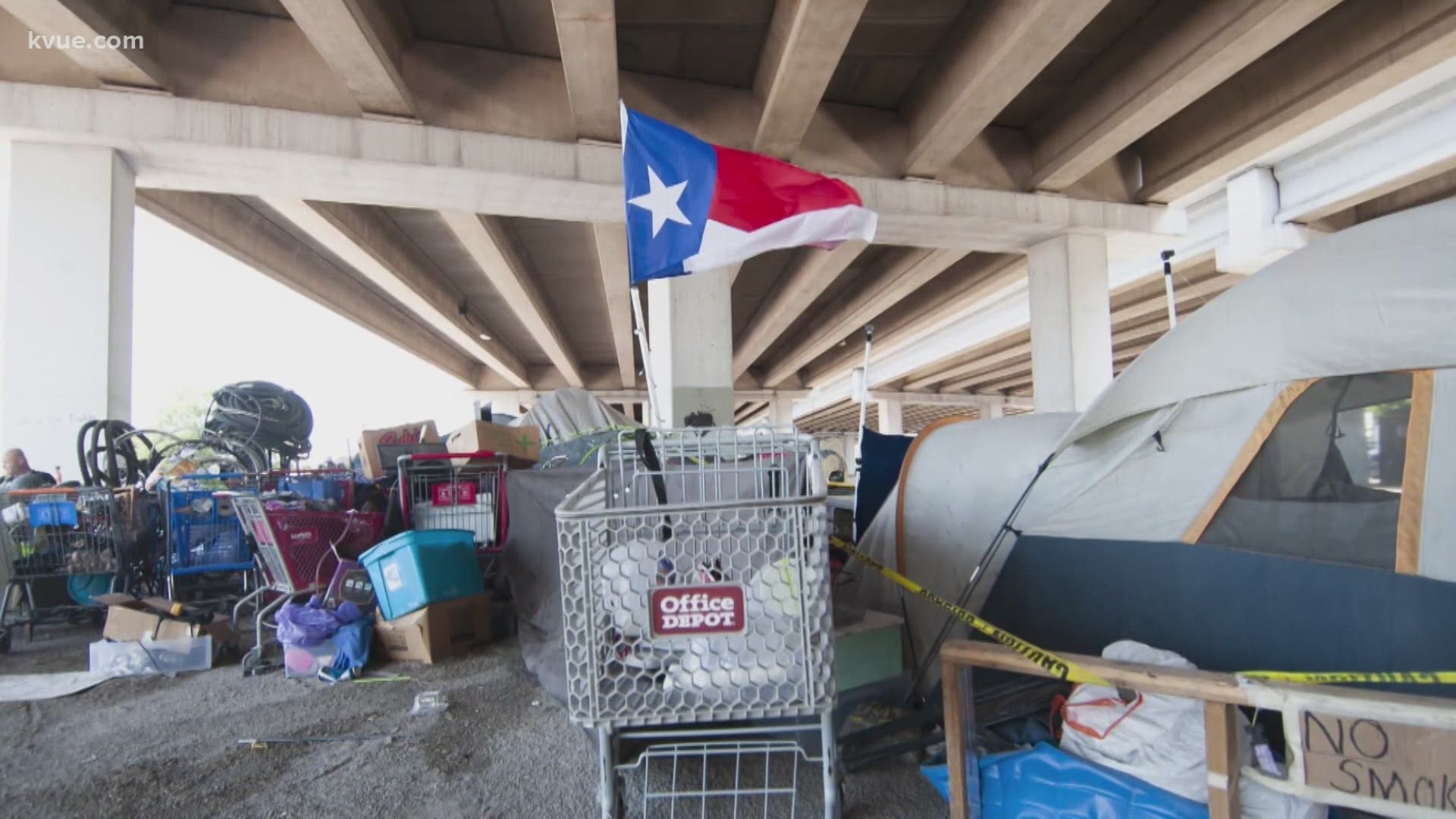 AUSTIN, Texas — On Monday, the Texas Senate Committee on Local Control heard Senate Bill 987, which would establish a statewide public camping ban and impose fines and penalties for camping in a public place.

The bill was introduced by Sen. Dawn Buckingham, a Republican from Lakeway just outside of Austin.

The discussion comes as Austin leaders have been meeting in a summit to develop a new strategy to address the area's homeless struggles. Also, in May, Austin voters will decide if they want to reinstate the city's orders regarding a public camping ban and panhandling, by voting for or against Proposition B.

During the April 12 hearing, Sen. Paul Bettencourt (TX-7), who chairs the Senate Local Government Committee, lashed out at Austin's homeless strategy officer who testified against the bill.

"This policy has flunked and failed flat on its face and we've got thousands of people at risk in this county and this town as a result, so why are we defending it at all?" Bettencourt said. "The City of Austin has defaulted on any possibility of leadership on this for two years."

Dianna Grey, the City's homeless strategy officer, told lawmakers she'd be happy to help them come up with a bill that is more suitable to the City's current situation.

"I understand the impulse but thinking that criminalizing unsheltered homelessness will make it go away is simply wishful thinking," Grey said. "Where are they going to go?"

Sen. Bettencourt said listening to the testimony of people who had been personally victimized by Austin's homeless population left him "outraged" and that while he doesn't get "lit up" very often, what he was hearing was "intolerable."

Rep. Giovanni Capriglione (R-Southlake) filled similar legislation, House Bill 1925, in the Texas House. The bill passed a house committee on Monday, which means it's now waiting for a vote from the full House.

Austin Mayor Steve Adler said if the bills move forward and become law, Austin will fight it, saying "Austin is going to do everything it can to stop that kind of misguided action from happening."

"It's just wrong. Proposition B and the State ban ... because they don't do anything. If someone doesn't have a home, our goal should not be to give them a fine or put them in jail or to be able to scare them into the woods or the streams by threatening that," Adler said.

Adler said the focus should be on getting people into homes and connecting them with services.

"The policies we had in the past did not work," he said. "It may be that you didn't see it as much because it was hidden, but the populations were continuing to grow and ultimately will overwhelm us unless we actually do something constructive."

The mayor said he wants the community to do better.

"We don't want people camping or tenting anywhere. We have not done as good a job of that as we should. Part of that was the COVID rules we've been dealing with," Adler said. "But that's what we need to be focusing on, getting people into housing, getting them services, getting them off our streets, not doing something that does nothing more than add a criminal penalty."

WATCH: Austin Mayor Steve Adler: City 'will do everything it can' to fight Texas SB 987

RELATED: New strategy to combat Austin’s homelessness expected to be unveiled this week

Prior to speaking to KVUE, Adler released a statement against Sen. Buckingham's bill:

Senate Bill 987’s camping ban doesn’t do anything to get people out of tents and off our streets. All SB 987 does is impose possible jail and fines for those without homes. At best, it will force those without shelter to hide and that’s even less safe. This bill, like Proposition B, offers no help and no solution. We can and must do better to get people out of tents, not merely to move their tents out of sight. SB 987 is not the answer.

Let’s not hide people; let’s house them. We can’t go back to the failed policies of the past that we know don’t work, like threatening jail and fines to make people move – when there’s nowhere for those people to move to. Instead, let’s commit to house all our neighbors."

Join me in calling the committee members to vote no on SB 987.

Allowing homeless encampments in public spaces poses a danger to our communities, including the homeless population. We cannot sit idly by and allow Texas families and businesses to suffer the economic and public health consequences that these encampments bring into our cities. These pieces of legislation provide a uniform policy for the entire state that will hold cities accountable to develop meaningful and compassionate long-term solutions to support those experiencing homelessness. I thank Sen. Buckingham and Rep. Capriglione for filing these important pieces of legislation and will work alongside the Legislature to sign these bills into law.

The Ending Community Homelessness Coalition (ECHO) voiced its stance on Prop B, asking people to vote no in the May election. ECHO said it's also opposed to SB 987.

Meanwhile, the Austin Chamber of Commerce Board of Directors announced it's in favor of Prop B.

Mayor Adler joined KVUE Monday morning, where he discussed homelessness in Austin, among other big topics facing the city.