Groups speak out against elections bill at Texas Capitol

As the House Committee on Elections takes up Senate Bill 9, several groups are rallying against it. 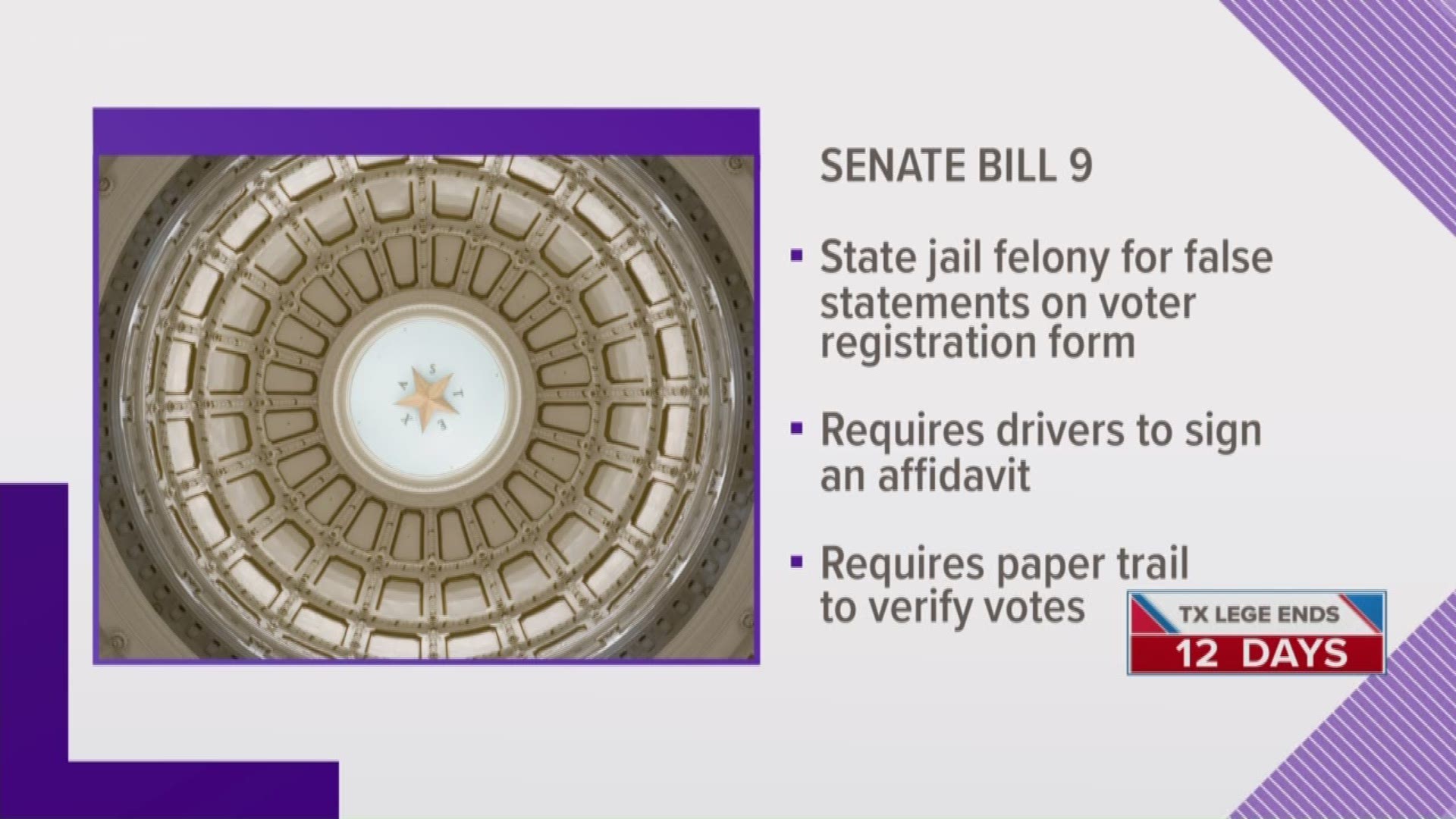 AUSTIN, Texas — With just 12 days left in the 86th Texas Legislative Session, the House Committee on Elections is hearing public testimony on a controversial elections bill.

The bill would make it a state jail felony to knowingly make false statements on a voter registration form. It would require people who drive three or more voters to the polls who cannot enter the polling location to sign an affidavit. The bill would require election officials to keep a paper trail to verify votes.

The Senate passed the bill a month ago, at which time Lt. Gov. Dan Patrick released the following statement:

"I congratulate Sen. Hughes on passing this important bill to ensure our democratic process is secure. Citizens must be confident in the integrity of their elections in order to maintain trust in our democratic institutions and the people they elect to represent them. Senate Bill 9 increases criminal penalties against those who commit voter fraud and corrupt our elections and helps protect the right of every Texan to know their vote is secure."

RELATED: Young Texans rally for voting legislation at the Capitol

Wednesday, the House Committee on Elections held a public hearing on the bill and received some criticism for limiting the number of people who can testify. In order to give public testimony, people had to register. Registration opened at 7 a.m. and the meeting started at 8 a.m., at which time it was announced registration would close at 8:30 a.m. Generally, registration remains open for hours, but the chair of the committee does have the authority to close it.

Opponents of the bill argued closing registration so early, it prevented hundreds of people from signing up to talk about the bill. They also said the bill criminalizes common mistakes.

RELATED: Texas will rescind its list of possible noncitizen voters, ending its botched review of the voter rolls

"SB9's provisions are designed to scare eligible voters with potentially enormous fines and years in jail for making a simple mistake, like an error on a voter registration form or mistakenly trying to vote in the wrong precinct," said Ric Galvan, a student leader for Texas Rising.

"SB9 isn't aimed at just suppressing the vote of young Texans, especially first-time voters and people of color,” said Texas Freedom Network President Kathy Miller. “It also makes casting a ballot even harder for the most vulnerable Texans – the disabled, the elderly, people needing assistance getting to the polls."

State Rep. Stephanie Klick (R-Fort Worth), chair of the House Committee on Elections and the representative carrying the bill in the House, countered those claims as she laid out the bill during the hearing.

"The intent of this committee substitute is neither voter suppression nor to enable voter fraud," Rep. Klick said. "Ultimately, the intent of SB 9 is to strengthen election integrity and make sure all votes cast are legitimate votes."

More than 100 people signed up to speak about the bill in the public hearing. The committee heard testimony after the House adjourned Wednesday.

Woman charged with murder after she pushed elderly man from bus, police say