The Sugar Land Republican faced fast and fierce backlash after accusing opponents of running against him because of their race. 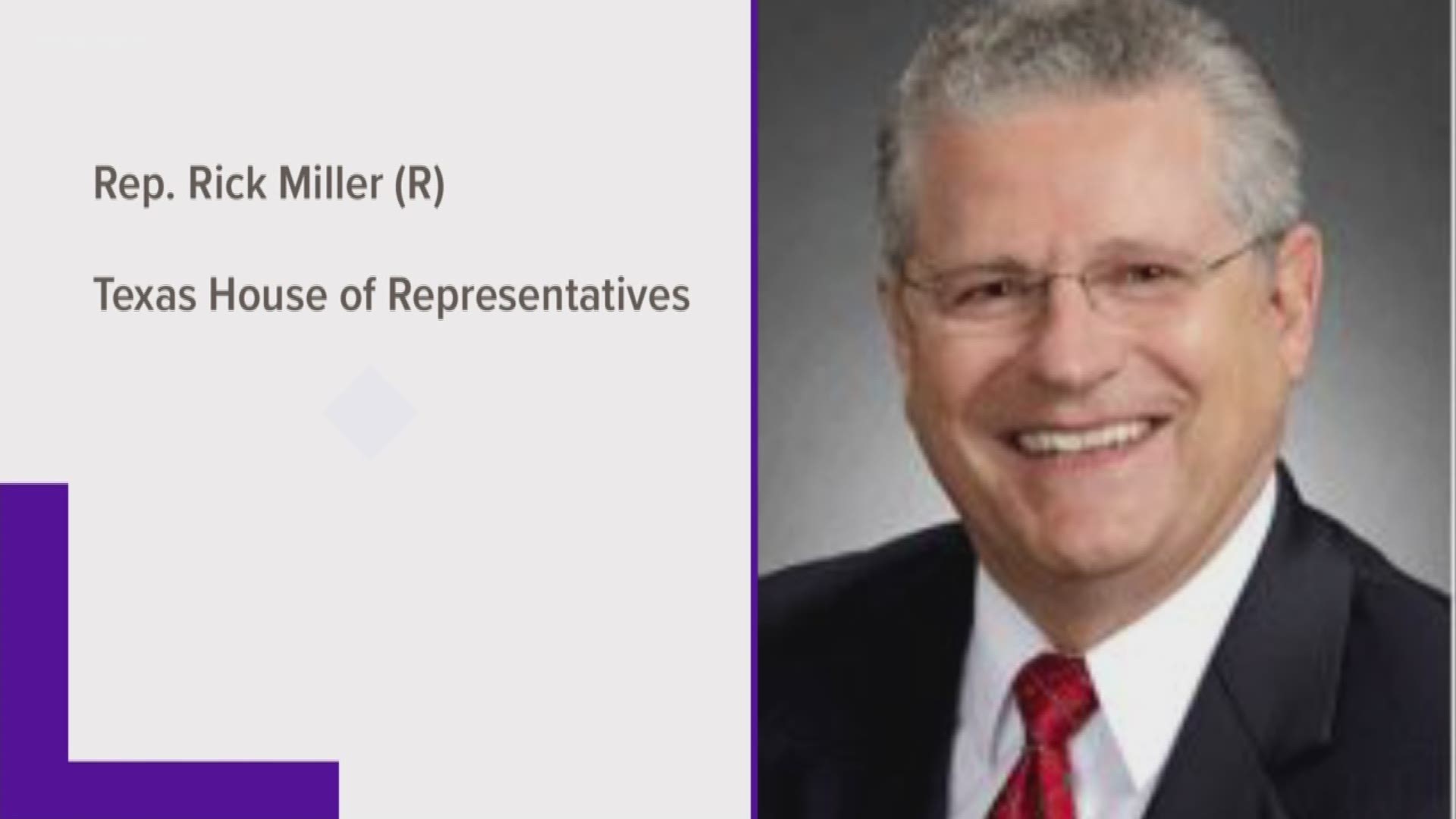 FORT BEND COUNTY, Texas — State Rep. Rick Miller, R-Sugar Land, is no longer running for reelection after he sparked a firestorm for saying he was facing primary challengers because they are “Asian.”

“During a recent interview with the Houston Chronicle I made some statements that were insensitive and inexcusable,” Miller said in a statement to The Texas Tribune. “In trying to make a point about the campaign I used a poor choice of words that are not indicative of my character or heart.”

“I do not want to be a distraction for my party or my constituents, and therefore I have decided not to seek re-election,” he continued.

In an interview with the Houston Chronicle, Miller said that two of his Republican opponents — former Fort Bend GOP Chairman Jacey Jetton and Houston Fire Department analyst Leonard Chan — likely joined the race because they’re Asian in a district with a sizable Asian population.

“He’s a Korean. He has decided because, because he is an Asian that my district might need an Asian to win. And that’s kind of racist in my mind, but anyway, that's not necessary, at least not yet," Miller said of Jetton.

The backlash was swift earlier Tuesday as Gov. Greg Abbott pulled his endorsement of Miller and the Fort Bend County GOP chair asked him to consider dropping out.

Chan “jumped in probably for the same reason,” Miller told the Chronicle. “I don’t know, I never met the guy. I have no idea who he is. He has not been around Republican channels at all, but he’s an Asian.”

In a statement earlier Tuesday, Abbott spokesman John Wittman said Miller’s comments were “inappropriate and out of touch with the values of the Republican Party.”

“In light of Rep. Miller’s comments, the governor is withdrawing his endorsement,” Wittman told the Tribune.

Abbott endorsed Miller for another term on Oct. 15, calling him a “strong, principled conservative who has represented the people of Fort Bend County with integrity.” The governor has backed all but a few House Republicans for reelection at this point. By late Tuesday morning, a page featuring Abbott’s endorsement of Miller had disappeared from the governor’s campaign website.

In addition to Abbott, Fort Bend County GOP Chairwoman Linda Howell denounced Miller’s comments. She also asked him to “strongly consider” ending his reelection campaign so he could make way for a “candidate that fully embraces and respects diversity in candidates and office holders.”

Miller’s decision creates a top pick-up opportunity for Democrats. It comes six days before the filing deadline for the March primary. Miller had already filed, though he has until the day after the deadline — Tuesday — to withdraw and ensure that his name does not appear on the ballot.

Miller’s district includes most of Fort Bend County, one of America’s most ethnically diverse counties: 20% of its residents are Asian, 20% are black, 24% are Hispanic and 34% are white. Hillary Clinton won the county decisively in 2016. According to the latest Census estimates, the citizen voting-age population for Asian residents in Miller’s district grew from 22% in 2010 to 24% in 2015.

In separate interviews, both Chan and Jetton said they were disappointed by Miller’s comments.

“I’ve stood by why I’m running and I’ve never run as an Asian or a Korean or anything other than another conservative Texan wanting to do good for the state,” Jetton said. “I don’t know where he decided to come up with these comments, but it’s unfortunate.”

“It’s about qualifications, merit and ideas,” Chan said. “You shouldn’t treat each demographic group as a group to try and capture at the ballot box.”

Both Chan and Jetton said Tuesday morning that Miller hadn’t reached out to apologize for his remarks. But in a statement, Miller said that he’s dedicated his life to public service and “improving the lives” of others.

“My comments were not made with malice nor do they reflect who I am or who I strive to be,” he said. “I want to publicly apologize to Jacey, Leonard and my constituents and friends who have put their trust in me through the years.”

“Conservatives typically don’t like to do that, but if that’s how [Miller is] seeing it, then I guess everybody has their own opinions,” he said.

Democrats were already targeting the seat after Miller won reelection last year by nearly 5 points and Beto O’Rourke, the 2018 Democratic U.S. Senate nominee, carried it by 2 points. Four Democrats have filed for the seat in 2020: Lawrence Allen Jr., a member of the State Board of Education; L. Sarah DeMerchant, the 2018 nominee against Miller; Rish Oberoi, a development consultant; and Suleman Lalani, a physician.

“Texas Republicans again are showing off their true colors,” said Abhi Rahman, a spokesman for the Texas Democratic Party. “From Dennis Bonnen to Rick Miller to the dirty tricks seen in the leaked Texas GOP playbook, voters are getting a firsthand look at what Texas Republicans look like behind closed doors and out in the open.”

Carla Astudillo contributed to this report.

“Every Texan has the right to a life of dignity and respect, free from discrimination and harassment. Texas Democrats are proud our candidates represent all Texans, no matter who they love, the color of their skin, where they come from, disability status, or how they identify. We will flip the Texas House in 2020.”

“Hate and discrimination have no place in our state or country. Every week, we hear another racist remark from Republicans. Having racist incumbents like Rick Miller is why the Texas Republican Party needs a video to fake diversity in their party and why Republicans will continue to lose elections in our increasingly diverse state. Whether it is Donald Trump, Greg Abbott, Dan Patrick, or now, Rick Miller, it is a sad reminder that our neighbors are still persecuted and attacked by those elected to represent them.

“Our candidates are fighting for a fair shot for all, and that is why we are going to flip Texas House District 26 in 2020 and earn the trust of Texans to lead the Texas House.”

RELATED: Jeb Bush drops out of the Republican race for president