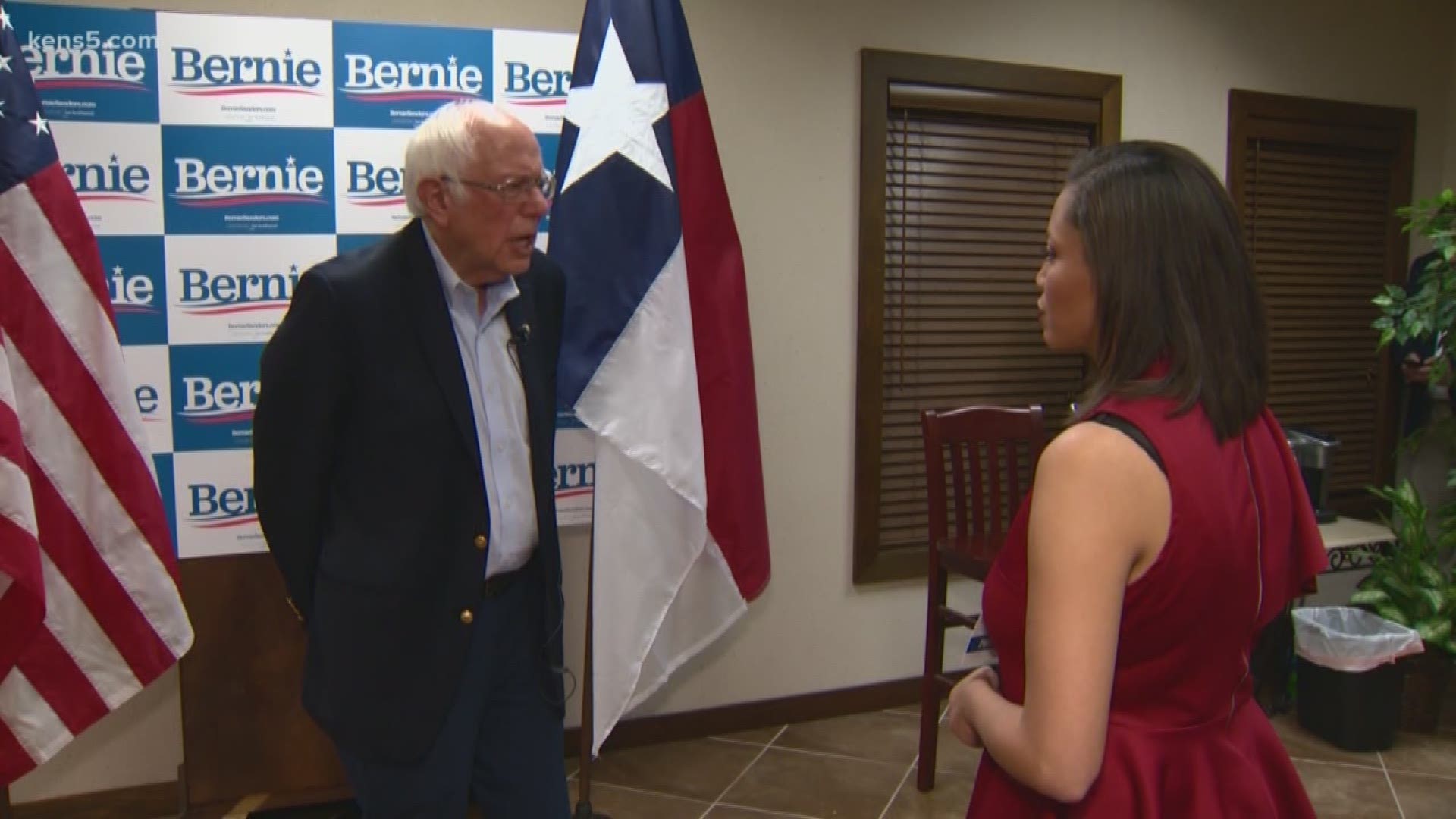 Just 10 days ahead of Super Tuesday and minutes after his reported victory in the Nevada caucuses, Democratic presidential candidate Bernie Sanders appeared at Cowboys Dancehall Saturday evening, touching on everything from universal healthcare to eliminating student debt and closing gun show loopholes.

Sanders also touched on his immigrant background when talking about ending "the demonization of (the) undocumented in this country."

"My father came to this country from Poland without a nickel in his pocket, couldn't speak a word of English, had very little education," he said. "I know something about the immigrant experience."

The candidate also touched on the issue of climate change, singling out Trump for calling it a hoax.

"The scientific community has a slight disagreement. They think that climate change is an existential threat to this planet, and our administration believes in science, not right-wing extremism."

He went on to emphasize his support for the Green New Deal, which Sanders's 10-year, $16 trillion climate plan builds on. He said he plans to transition away from fossils fuels and toward sustainable energy.

Ending private prisons was another platform topic the Vermont senator touched on, touting that as a vital step towards fixing a criminal justice system he called broken and racist. He also touched on his intent to legalize marijuana on a federal level if he wins the 2020 race, as well as expunging the records of those who have been arrested for possession of marijuana.

Sanders also brought up last year's deadly El Paso shooting that killed 22 and injured many more, saying he and his wife visited the memorial while in the city earlier in the afternoon. He the transitioned into his proposed gun safety legislation, saying it will "be written by the American people, not the NRA."

Sanders ended his 20-minute speech by touching on his proposals to expand funding for Planned Parenthood and amend the wealth gap in the U.S., as well as a final call to action to his supporters.

"If we stand together, we will not only defeat (President Donald) Trump; we will transform this country and create a government and an economy that works for all of us, not wealthy campaign contributors," Sanders said.

More than 5,700 attended the rally, according to campaign officials. The doors at Cowboys dancehall opened around 5 p.m., allowing supporters of the Democratic presidential hopeful to begin filing in as they awaited for the candidate to take the stage.

San Antonio is just one of many Texas campaign stops for the Vermont senator. He was in El Paso earlier in the afternoon on Saturday, and plans to hold another rally in Austin on Sunday.

Saturday's rally took place  just hours after another top Democratic presidential candidate, Elizabeth Warren, announced that she will stop by the Alamo City for a town hall on Thursday with native south Texan Julian Castro.

Volunteers at Sanders's rally said they have been going door to door to get out the vote, adding that Texas has the potential to be a swing state in this year's elections—which is why candidates are looking to big cities in the Lone Star State to win over supporters.

"You can't deny the Latino population here in San Antonio," said Eric Rodriguez of the Texas Organizing Project. "I think that's something that Bernie has been consistent on reaching out to, all across the country."

According to the latest UT/ITT poll, Sanders currently leads the race for his party's presidential nomination among Texas voters. He had 24% of Democratic voter support in the poll, while former South Bend Mayor Buttigieg and U.S. Sen. Amy Klobuchar were second and third, respectively.