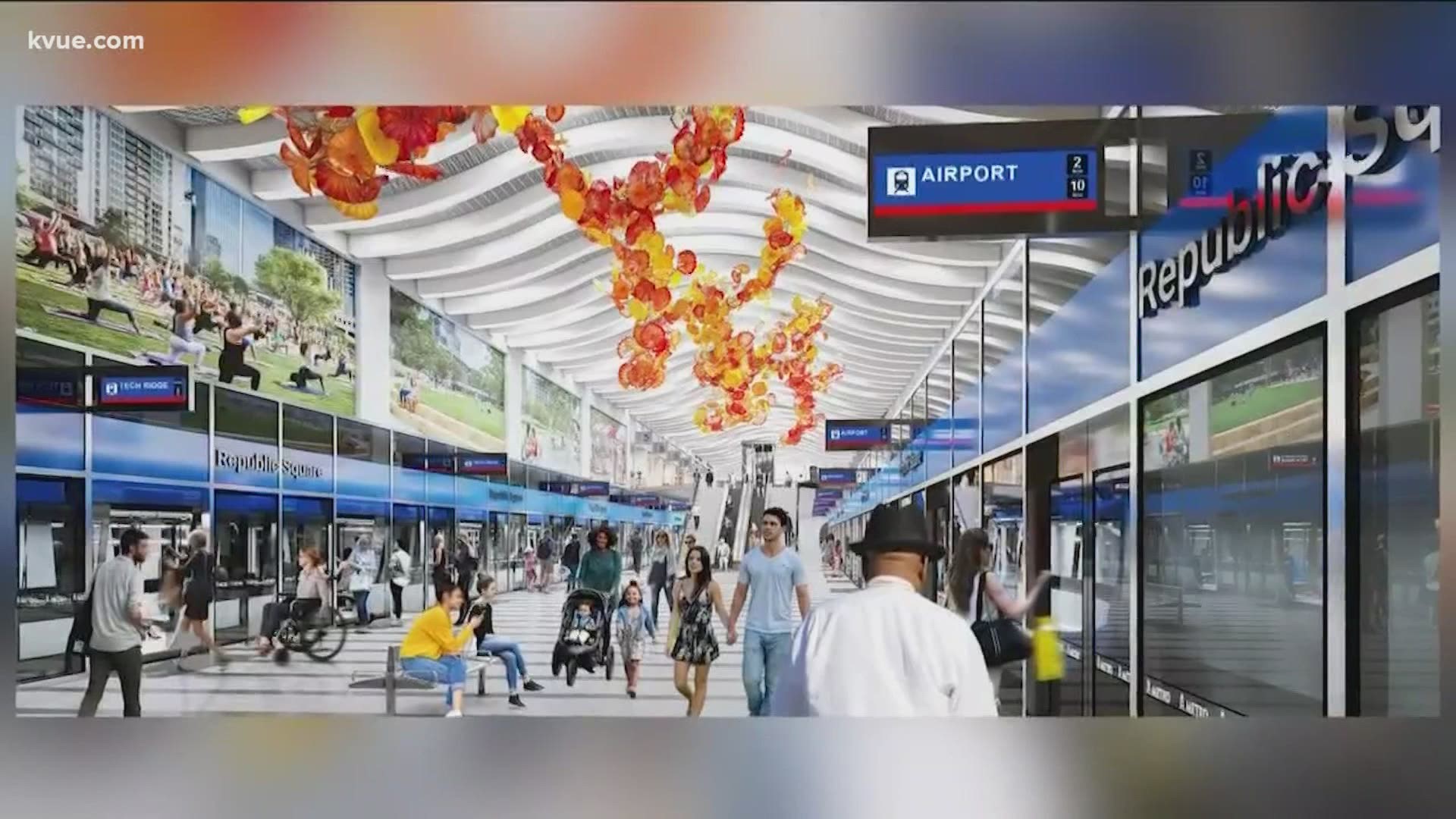 AUSTIN, Texas — Texas legislators are considering House Bill 3893, which would lease the underground portion of State property to Capital Metro in order to build two underground stations for the light rail system approved by Austin voters.

The House Land and Resource Management Committee will hold a public hearing on the bill Tuesday morning.

HB 3893, filed by Rep. Gina Hinojosa (D-49), would grant a 99-year lease to Capital Metro for the subsurface portion of the property at Republic Square and Brush Square Park, which is where the Republic Square Station and Downtown Station are planned. It would also allow the transit agency to build the underground tunnel that has been shown in renderings, including all the billboards and stores, according to the representative’s office.

The properties have a long history in the state legislature.

In 1913, the 33rd Legislature approved HB 215, which granted the City of Austin a 99-year lease on several properties around the city, including what we know today as Republic Square.

Then in 2013, the state’s 83rd Legislature approved SB 1023, which included a 99-year lease extension on the Republic Square property and added Brush Park to the City’s lease.

But the lease to the City is only for the surface-level part of the property – not the subsurface area where the transit tunnel is planned.

A companion bill was filed by Sen. Sarah Eckhardt (D-14) in the Texas Senate. It was referred to the Senate Transportation Committee on March 26.

RELATED: Project Connect: What's the next step for the $7.1B Austin transit plan?

If the bill doesn’t pass the legislature, designers and engineers working on Project Connect would have to find other land to carry on with plans to build the underground stations. Capital Metro told KVUE there are several alternative design concepts that would achieve the transit system that voters approved.

A Capital Metro spokesperson told KVUE the transit agency plans to proceed with Project Connect regardless of the bill’s passage and that it’s still early in the design phase of the system. The agency will have to work with hundreds of parcels of land throughout the process, which will require working with different partners and stakeholders.

"We will deliver a transformative transit program that was strongly supported by Austinites in November 2020. Project Connect is early in the design process, and as part of that process, we are seeking a land lease to implement one potential design concept included in the program. The program that voters approved is what we are committed to implementing," Capital Metro said in a statement.

In November, Austin voters approved Prop A, which increased the City’s property tax rate and dedicated 8.75 cents of the operations and maintenance portion of the tax rate for Project Connect, Capital Metro’s $7.1 billion public transit plan.

For more of KVUE's reporting on Project Connect, visit KVUE.com/ProjectConnect.