President Trump traveled to Texas on Wednesday, but his trip was overshadowed by news that a Texas congressman who planned to be with the president has COVID-19. 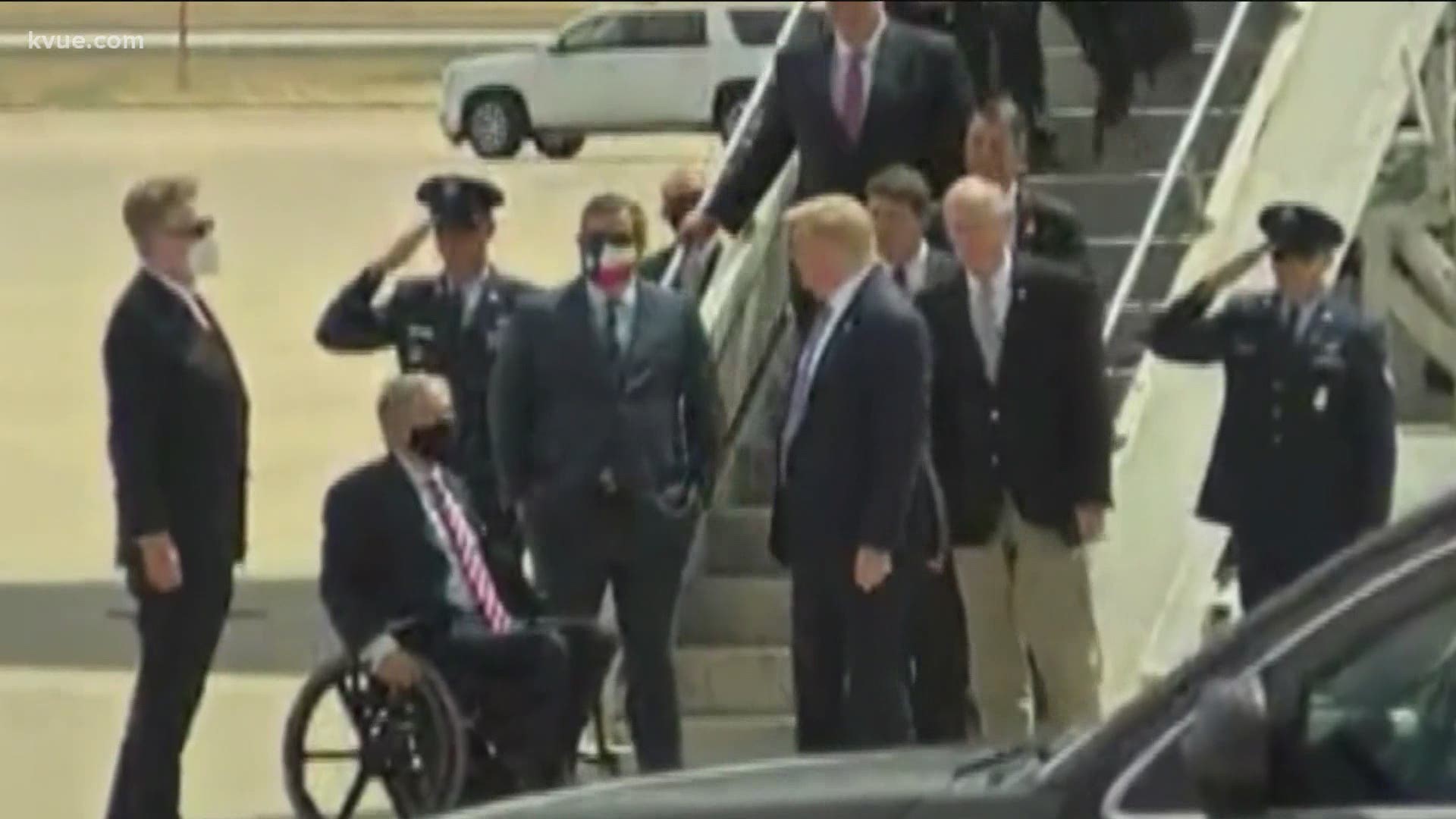 MIDLAND, Texas — President Donald Trump and his entourage, including U.S. Sen. Ted Cruz (R-Texas), arrived in Midland on Wednesday afternoon. They were greeted by Gov. Greg Abbott and Lt. Gov. Dan Patrick before heading to a private fundraiser in neighboring Odessa. Tickets to the fundraiser ranged in price from $2,500 for lunch to $50,000 for a couple's photo with the president.

Notably, U.S. Rep. Louie Gohmert (R-Texas) wasn't with Trump as planned because he tested positive for COVID-19 during a White House screening on Wednesday.

"I'm asymptomatic," Gohmert said in the video. "I don't have any of the symptoms that are listed as part of COVID-19."

My statement about today's diagnosis: pic.twitter.com/qvf7zIcgdN

The Tyler Republican questioned Attorney General William Barr during a House hearing on Tuesday and was seen in the hearing not wearing a face covering. Some lawmakers have criticized Gohmert for not wearing a mask around Capitol Hill, but he refutes those claims.

"Look, I've worn a mask more the last week or two than I have in the last four months. And I was wearing my mask at the judiciary hearing," Gohmert said.

"But it is interesting, and I don't know about everybody, but when I have a mask on I'm moving it to make it comfortable. And can't help but wonder if that puts some germs in the mask," he added.

Gohmert's Texas colleagues on the other side of the aisle criticized the president's visit to the Lone Star State and his response to the coronavirus pandemic.

"They're more concerned about trying to cover up their failures than they are about covering up their faces with a mask," said U.S. Rep. Sylvia Garcia (D-Texas).

"There's still about one half of the cases in Texas, the deaths are happening in nursing homes. Why haven't we figured that out?" she added. "The first cases were at nursing homes. By now we should have a better plan for taking care of this."

After the fundraiser, the president traveled to the Double Eagle Energy Rig in Midland.

"My administration is announcing today that export authorization for American liquefied natural gas can now be extended to the year 2050," President Trump announced. The president also signed four permits allowing pipeline and railway infrastructure on the Mexico border – actions he said will restore energy dominance in the Permian Basin.

While President Trump spoke in Midland on Wednesday, he praised his administration's decision to throw the Affirmatively Furthering Fair Housing (AFFH) regulation, which was issued in 2015 by former President Barack Obama.

"By the way, I just ended the rule on suburbs. You know the suburbs.
People fight all of their lives to get into the suburbs and have a
beautiful home," President Trump said. "There will be no more low-income housing forced into the suburbs. I abandoned and took away and just rescinded the rule. It’s been going on for years. I have seen conflict for years. It’s been hell
for suburbia. We rescinded the rule three days ago. So enjoy your life,
ladies and gentlemen. Enjoy your life."

Dr. Kazique J. Prince, the CEO Jelani Consulting in Austin, which is a firm that focuses on diversity, inclusion and equity, said he was disappointed in the messaging from President Trump.

"I was disappointed because I felt like his messaging was really an attempt to speak to suburbia voters who he thinks will vote for him, and really tapping into that, I think, mentality that somehow making communities more diverse is somehow bad for communities," Prince said. "In truth, when you make communities diverse, racially diverse, you actually strengthen those communities in really powerful ways."

The City of Austin provided KVUE a statement saying:

"It remains incumbent on local governments to continue to work toward ensuring fair and equitable housing is available to all in our community – especially given our current economic and public health circumstances."

Report: UT has had more COVID-19 cases than any other university in US