Over 1,000 march at Texas Capitol for 'Rally for Life'

They marched for what they believe in: restricting abortion. But, they were also met with counter-protesters.

AUSTIN, Texas — More than 1,000 people marched at the Texas Capitol during the 'Texas Rally for Life' on Saturday.

Here's a look at the March for Life that took place in Austin in 2018: 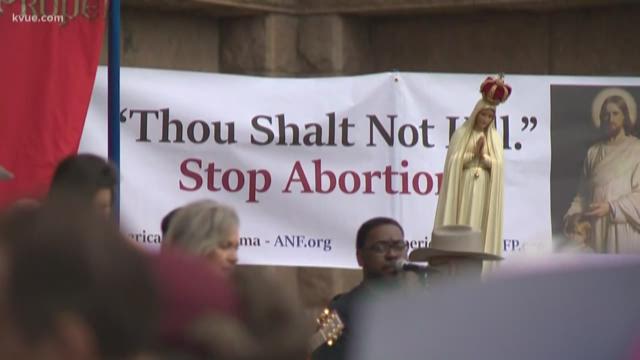 Organizers said the march recognizes the Roe vs. Wade Supreme Court decision made back in 1973. That ruling expanded legal protections for abortion, which organizers of this protest are against.

The march began at 1 p.m. near 14th Street and San Jacinto. Participants then marched to the Capitol for a rally.

The people who marched were excited to be there and came from all over Texas.

"We are out here, of course, supporting life," Scarlett Clay, who is pro-life, said.

“Sometimes, I’m just standing by myself and it means a lot just to see everyone that’s supporting life," Leti Murga, who is also pro-life, said.

But not everyone there supported the same thing.

“We’re out here to raise awareness in regard to women’s right to choose," Elizabeth Ballew, the organizer of the Texas Handmaids, said.

The group protested the march on Saturday, dressed as characters from 'The Handmaid's Tale,' a popular show and novel where women have little to no rights.

RELATED: New bill would ban abortions in Florida once a heartbeat is detected

“There’s always going to be one side versus the other in terms of hot issues like these," Ballew said.

She went on to say those hot issues have to be talked about and that it's great people can do that during demonstrations like this one.

“I feel like it's really important for us to be able to come out here and, you know, use that constitutional right of freedom of speech to let people know," Ballew said. "It’s been interesting to see just all of the different sides and how people react to our signs and just us in general."

The people who were marching agreed.

“In my opinion, it’s necessary to hear the other side before you form your own opinion," Chris Brown, who is pro-life, said.

“It’s extremely important, and I think every person here would agree, we’ve got to be able to have an outlet and a way to express our arguments and make the case for why we believe this is so important," Clay said.

Austin police officers and Texas DPS troopers were on-hand for the event.

There were no reports of any arrests or incidents.