KENS 5 has a look at the standout moments from the U.S. House of Representatives vote on Wednesday. 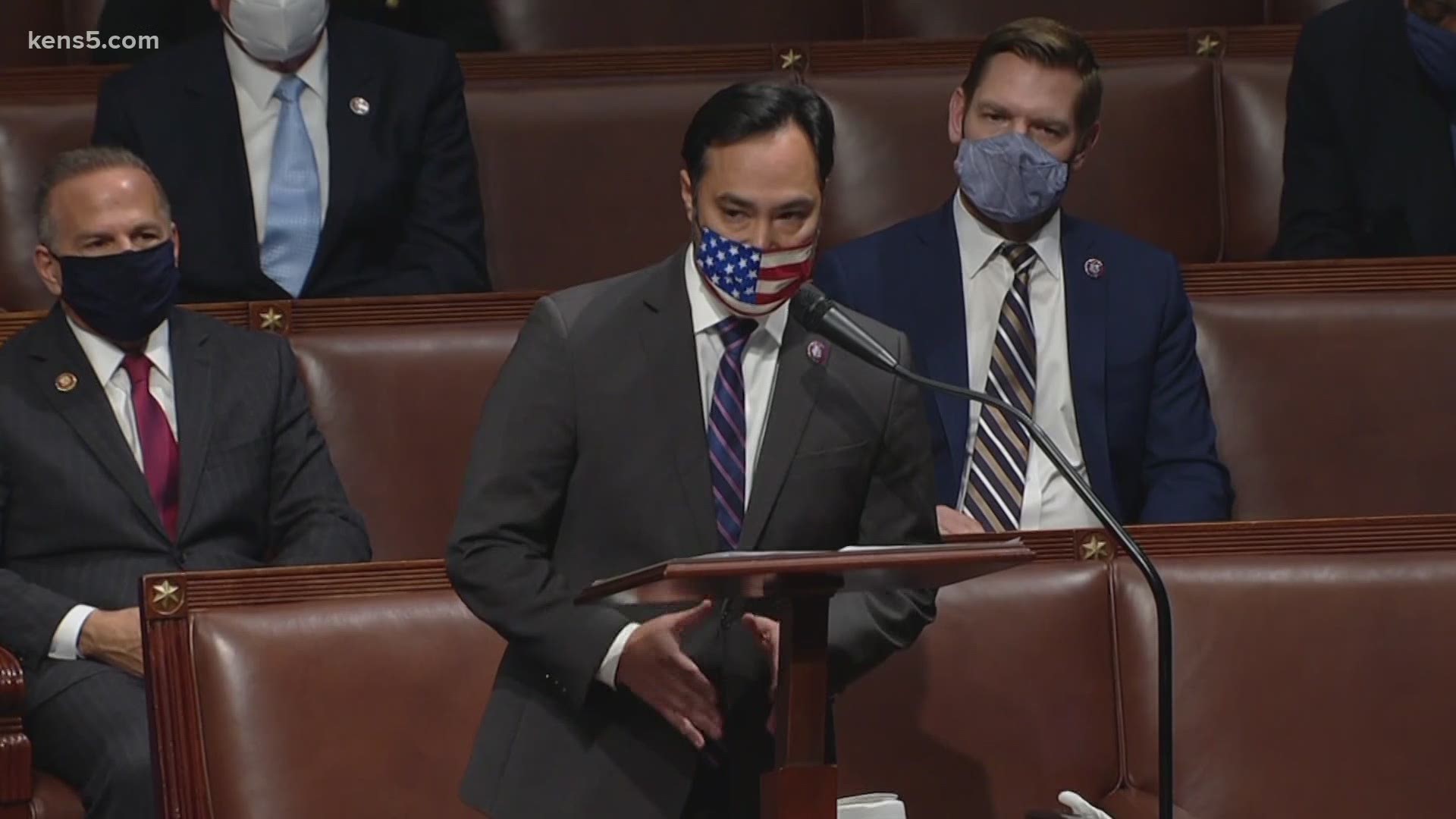 SAN ANTONIO — The U.S. House floor became a stage for impassioned speeches from local lawmakers in regards to the impeachment vote of President Donald Trump.

On Wednesday, the House voted 232-197 to impeach Trump. Republican legislators Tony Gonzales and Chip Roy, who represent San Antonio-area districts, voted not to impeach him, while their Democratic colleagues Lloyd Doggett, Joaquin Castro and Henry Cuellar voted in favor.

Castro, who will serve as one of nine impeachment managers in the Senate trial, described the chaos that unfolded on Jan. 6, when a violent mob of Trump supporters breached the U.S. Capitol. Members of Congress were forced to evacuate the building.

Doggett also mentioned the Capitol attack in his remarks. He said that, for years, Trump has “honored thugs worldwide.”

“Both his frenzied, riotous mob and his Congressional enablers were defeated. America, we did 'stop the steal'— we stopped Trump from stealing our democracy and imposing himself as a tyrant," Doggett said. "Today, we not only demand accountability for his gross misconduct, but more importantly, we declare to the next Trump-like, aspiring tyrant: Not in America."

Cuellar echoed the same sentiments and voiced his support for Trump's removal from office as his presidency comes to a close.

Chip Roy who agreed that Trump’s actions were impeachable, said the president misled the American people.

“His open and public pressure courageously rejected by the vice president purposely seeded the false belief among the president's supporters, including those assembled on January 6, that there was a legal path for the president. It was foreseeable and reckless to sow such a false belief that could lead to violence and rioting by loyal supporters whipped into a frenzy,” Roy said.

But ultimately, Roy said the articles of impeachment were “flawed” and it could be used to target others in the future.

“(It's) unsupportable, focusing on the legal terms of incitement and insurrection. Even noting impeachment does not require meeting a certain legal standard, that danger for open speech and debate in this body and for the republic is high if the House approves the articles as written,” Roy added

Tony Gonzales said he voted no because an impeachment would not make a positive impact. He sent us this statement:

“America needs a steady hand to calm our nation’s unrest. Today’s vote on impeachment was another partisan move forced by Nancy Pelosi. With one week left in President Trump’s term, the latest efforts to impeach the President does nothing to heal our country. We are bitterly divided right now – and this effort only worsens that divide.”