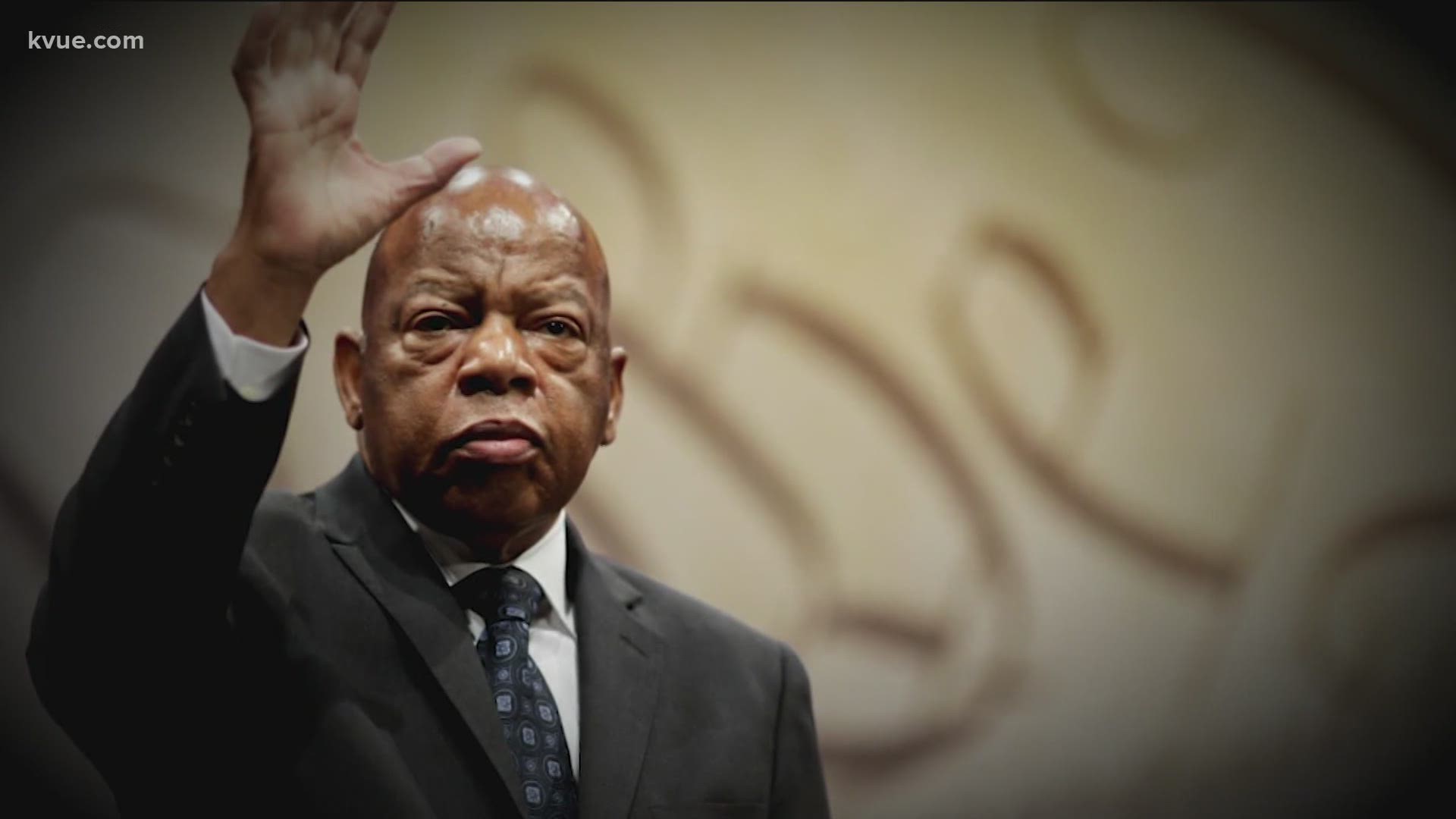 AUSTIN, Texas — U.S. Rep. John Lewis, an icon of the civil rights movement, died Friday at age 80 after a battle with advanced pancreatic cancer. Now people across the nation are reflecting on his life and legacy, including Texas political leaders.

"Laura and I join our fellow Americans in mourning the loss of Congressman John Lewis. As a young man marching for equality in Selma, Alabama, John answered brutal violence with courageous hope. And throughout his career as a civil rights leader and public servant, he worked to make our country a more perfect union. America can best honor John's memory by continuing his journey toward liberty and justice for all."

The daughters of President and Mrs. Lyndon B. Johnson, Luci Baines Johnson and Lynda Johnson Robb, commented on the passing of Lewis in a statement on Saturday afternoon, saying Lewis was the "teacher, hero and friend" of generations of Johnsons.

"His life’s work was the courageous and never-failing pursuit of our father’s dream for a more just society.

"When our father signed the 1965 Voting Rights Act, he gave one of the first pens to John Lewis. It was the right way to thank this 25-year old’s sacrifice for freedom. Five months earlier, at the Edmund Pettus Bridge in Selma, Alabama, John Lewis had been badly beaten as he led the march against racial injustice and the right to vote for all. His heroic struggle to make America a better place was a fight he waged for the rest of his life.

"There is a hole in the hearts of our family with his passing. May we “never ever give up” until John Lewis’ dream of Liberty and Justice for all comes true. May we continue to hold his loving hand in our hearts and actions."

"John Lewis has left an indelible mark on the hearts of not only those in his home state of Georgia but all over our nation and across the world. He will be remembered for many things, but his tireless work as a civil rights leader and dedication to fighting for the oppressed changed the course of history. Sandy and I will be praying for his family and all those who were touched by his life as we mourn this collective loss."

Congressman John Lewis will be remembered for many things, but his tireless work as a civil rights leader and dedication to fighting for the oppressed changed the course of history. He made an impact not just on Georgia, but the world. RIP

"Heidi and I join men and women across the globe in grieving the loss of the great John Lewis. In my first year in the Senate, I had the privilege of traveling with John and much of the Congressional Black Caucus to Nelson Mandela’s funeral in Johannesburg.

During the trip, John regaled us with stories of being alongside Dr. Martin Luther King, Jr. As one of the original Freedom Riders, John was a young man at the dawn of the Civil Rights movement, and he survived a brutal beating on the Edmund Pettus Bridge in Selma. At 23, he was a keynote speaker at the March on Washington, on the steps of the Lincoln Memorial.

To say he was an icon or a hero is an understatement. He had a quiet grace, a passion for justice and an indomitable courage that helped transform this nation. I am blessed and humbled to have known John and to have heard his deep wisdom firsthand.

Heidi and I are lifting up in prayer his family, his loved ones and all of America as we mourn the loss of a good and great man. His legacy will endure on as we continue to strive for justice for all."

"One of the greatest privileges of serving in Congress has been the opportunity to know and work with John Lewis, at whose side I have shared the Ways and Means Committee dais. John was a man of conviction and courage, of humility and good humor. I give thanks for his personal friendship and for all that he did to lead America to a better place – while reminding us regularly of how much better we can and should be."

One of the greatest privileges of serving in Congress has been the opportunity to know and work with John Lewis, at whose side I have shared the Ways and Means Committee dais. John was a man of conviction and courage, of humility and good humor. #GoodTrouble pic.twitter.com/sbhTWSrcpG