It appears Democrats are successfully keeping their coalition together and are intent on running out the clock on this special session. 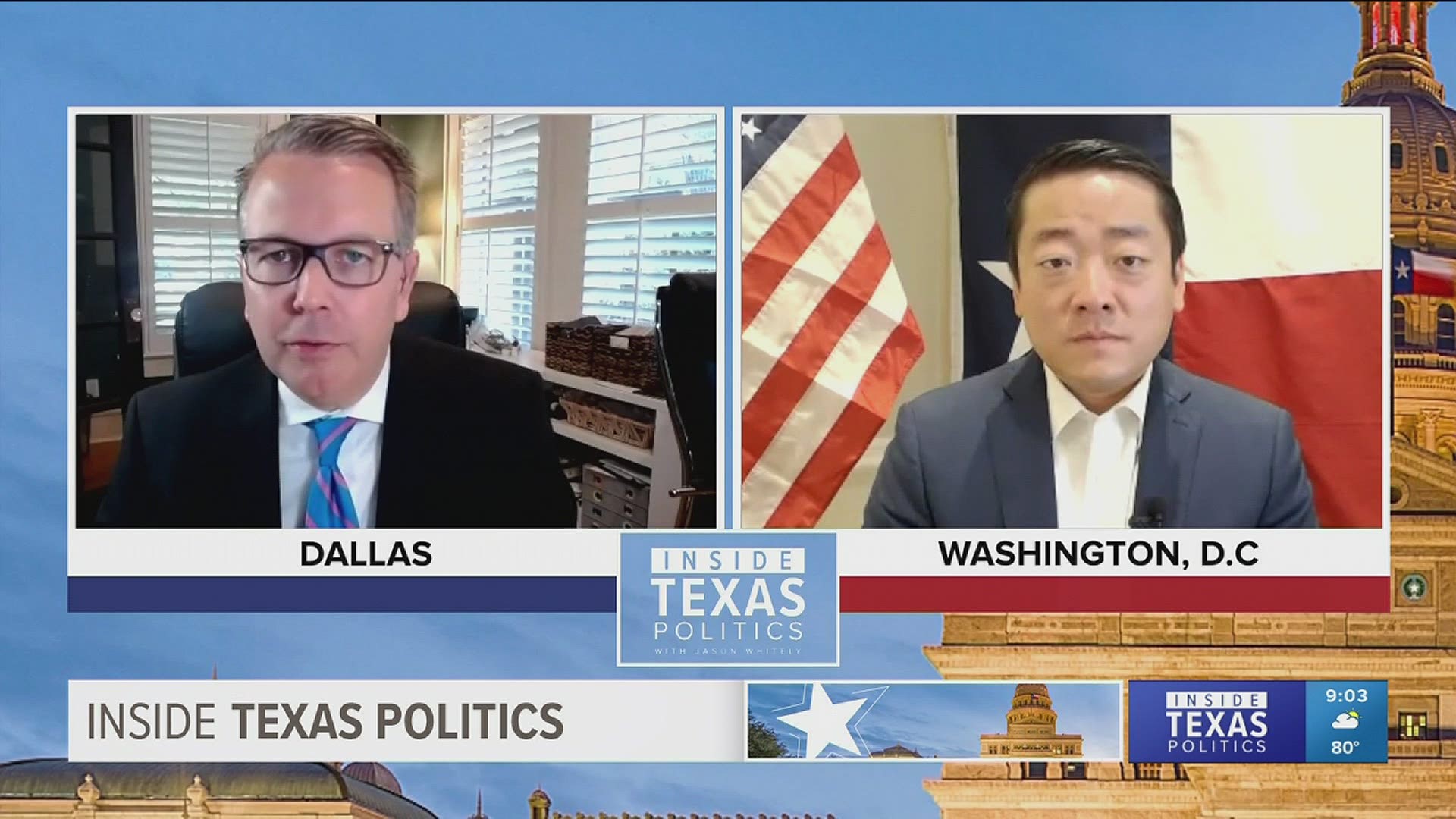 DALLAS — The big political news remains in the House chamber at the state capitol.

We are entering week three of Texas House Democrats in Washington, D.C.

COVID has now become a distraction, but it appears Democrats are successfully keeping their coalition together and are intent on running out the clock on this special session to kill another Republican bill to change how and when Texans vote.

State Rep. Gene Wu, D-Houston, spoke to Inside Texas Politics from the Washington hotel where he and his colleagues remain in their self-imposed exile.

He said that the Democrats' goal in going to D.C. was to have the public "woken up" to what he called the slow erosion of the public's right to vote, and, on this halfway point of the special session, Wu said he believes that goal has been accomplished.

However, over the past week, that messaging got muddled after headlines turned to the handful of Texas Democrats testing positive for COVID-19.

"It killed their messaging," explained Ross Ramsey with The Texas Tribune. "They were trying to concentrate on getting Congress to pass voting legislation that would preempt what they don't like in in Texas, and instead they spent the week talking about COVID."

"They're going to have to get attention back to get anywhere with their program," Ramsey added.

But the next plot twist in the Texas House Democrats fleeing to D.C. could happen at the state's Supreme Court. Justices are being asked to decide whether Gov. Greg Abbott can legally veto salaries for the legislative branch. Abbott did that because Democrats left in May.

The Republican Party of Texas is officially under new leadership.

Lt. Col. Allen West resigned to run for governor. The new chairman is a known name among Texas conservatives: it's Matt Rinaldi. He is a former state representative from Dallas County.

Rinaldi originally endorsed one of Abbott's challengers, raising the question: how he will work with the governor?

Rinaldi acknowledged that there are "splinters" in the Texas GOP, but said those same splinters exist in any organization or business. He said those differences can be overcome by "treating people with respect, hearing their views and allowing everyone to have a voice."

RELATED: New GOP chair vows to work with Republicans (Democrats, not so much)

That approach could be essential going forward in future elections.

And there's one bright spot for Republicans here: the Rio Grande Valley – the southern tip of Texas.

We've talked a lot on Inside Texas Politics about how presidential races are getting closer and closer in Texas. But over the last three to four years, Republicans have chipped away at this Democratic stronghold.

And the city of McAllen just elected its first Republican mayor in decades. Mayor Javier Villalobos spoke to us from McAllen City Hall about the change his election represents and whether Republicans are making a mistake about not being more inclusive in the party.

"I can't speak for that, but I can speak for what I did," Villalobos said. "And what worked for me was to be inclusive for everybody. If you're Republican and you're trying to gain support, you're not going to get it from other Republicans, you're going to get it by bringing in people."

"There's no reason to be adversarial," he added.

The Delta variant is beginning to put young Texans in the hospital. But Abbott says masks will not be required again, even in public schools. Do counties and cities and schools have many options? Politically, is this tough talk helping him with the far right of the party?

"I think that what you're going to see is those county commissioners and those city council people and all those, they're going to get the message out to get vaccinated and encourage the schools and the teachers to encourage the parents to have masks on their children and put masks on, because these governmental agencies, they can't do too much because of what Abbott has done," WFAA political producer Berna Dean Steptoe explained on the show.