Gov. Greg Abbott's spokesman said Democrats should "stop talking to cameras and start talking to colleagues in the Capitol to reach consensus."

AUSTIN, Texas — Gov. Greg Abbott's Office responded to the request from Democratic lawmakers that the governor call a special session on gun violence.

"Governor Abbott made clear in Odessa that all strategies are on the table that will lead to laws that make Texans safer. But that doesn't include a helter skelter approach that hastily calls for perfunctory votes that divide legislators along party lines. Instead, the Governor seeks consensus rather than division. The Democrats who are part of today's partisan pitch can be part of the bi-partisan legislative process announced yesterday that is geared toward achieving real solutions, or they can be part of politics as usual that will accomplish nothing. Legislating on tough issues is hard and takes time. If Democrats really want to change the law, they need to stop talking to cameras and start talking to colleagues in the Capitol to reach consensus."

Nearly all of the members of the House of Representatives Democratic Caucus sent a letter to Gov. Abbott on Wednesday, asking him to call a special session in reaction to the mass shootings in El Paso and Midland-Odessa. After sending the letter, Democratic lawmakers held news conferences in major cities across the state, including at the Capitol in Austin. 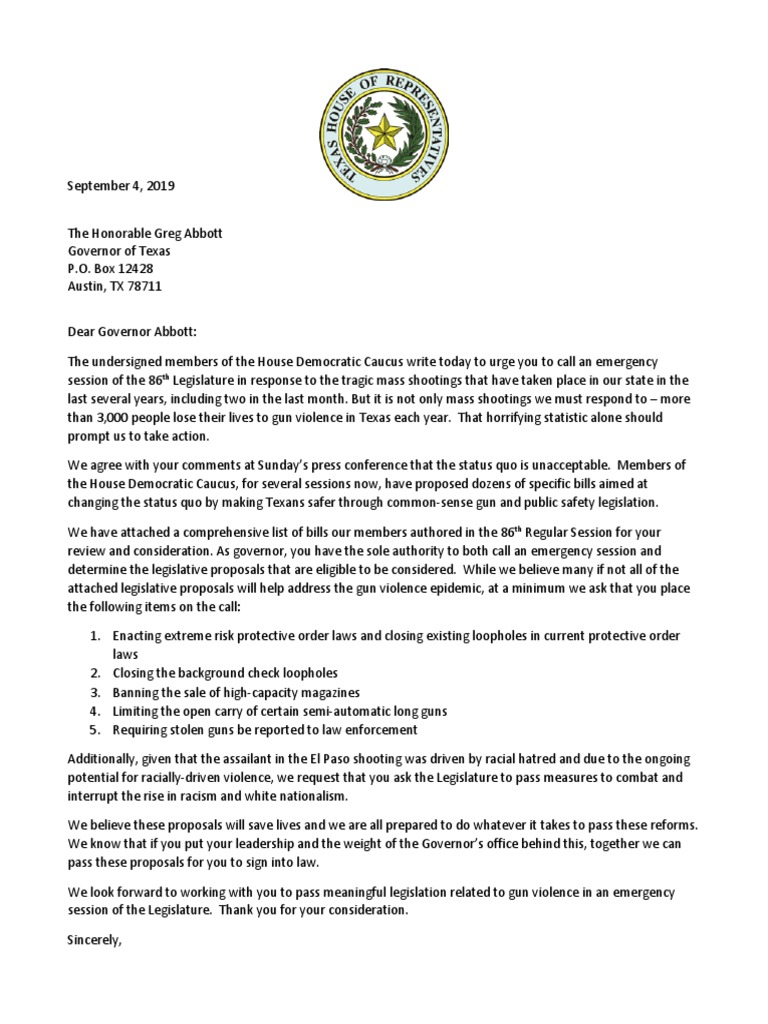 House Democratic Caucus letter to Governor Abbott 9.4.19 | Crimes | Crime & Justice
Governor of TexasP.O. Box 12428Austin, TX 78711 The undersigned members of the House Democratic Caucus write today to urge you to call an emergencysession of the 86th Legislature in response to the tragic mass shootings that have taken place in our state in thelast several years, including two in the last month.

When Texas governors call special sessions, they have to identify the issues lawmakers can pass bills on. The Democratic Caucus included a list of five issues in their letter to Gov. Abbott that they want to be the focus of the session:

"There are many good and popular ideas out there, and they deserve a thorough, open and public debate. Not closed door, invitation-only roundtables," State Senator Kirk Watson (D-Austin) said. "Texans are tired of their politicians hoping to wait them out on the issue of gun violence."

Austin Representative Gina Hinojosa (D) said an example of a background check loophole that needs to be closed happened in Austin. Police were called about a man with a gun in Pease Park in Central  Austin and it turned out he legally purchased the firearm, despite having a warrant out for his arrest in Houston for domestic violence.

"Think about this, you can have an active warrant for your arrest, for murder and legally pass a background check system in the State of Texas," Rep. Hinojosa said.

Gov. Abbott established two commissions after the mass shooting in El Paso to look for solutions to gun violence.

During the first meeting, Gov. Abbott said action can be taken without calling lawmakers back for a special session.

"The way Texas government works, action can be taken without laws being passed," Gov. Abbott said during the August 22 meeting. "The levers that are available to the executive branch agencies and to the Governor's Office are almost unlimited in our ability to take action swiftly."

On Tuesday, Lieutenant Governor Dan Patrick and Speaker of the House Dennis Bonnen (R-Angleton) announced they would appoint select committees to study gun violence in the interim before the 2021 legislative session. On Wednesday, the members of those committees were announced.

The House Select Committee on Mass Violence Prevention and Community Safety will consist of:

According to a news release from Speaker Bonnen's office, the committee "has jurisdiction over all matters that ensure the safety of Texas communities by reducing mass violence, including collaboration between state and local agencies and nongovernmental entities in preventing and responding to mass violence, violence prevention strategies that foster safe climates in schools and local communities, state and local funding for research and program development, access to state and local services for communities impacted by mass violence and persons at risk for harming themselves or others, and technological solutions to better detect, assess, report, and prevent threats."

The members of the Senate Select Committee on Mass Violence Prevention and Community Safety include:

In a news release, Lt. Gov. Patrick said the committee will begin meeting later this month.