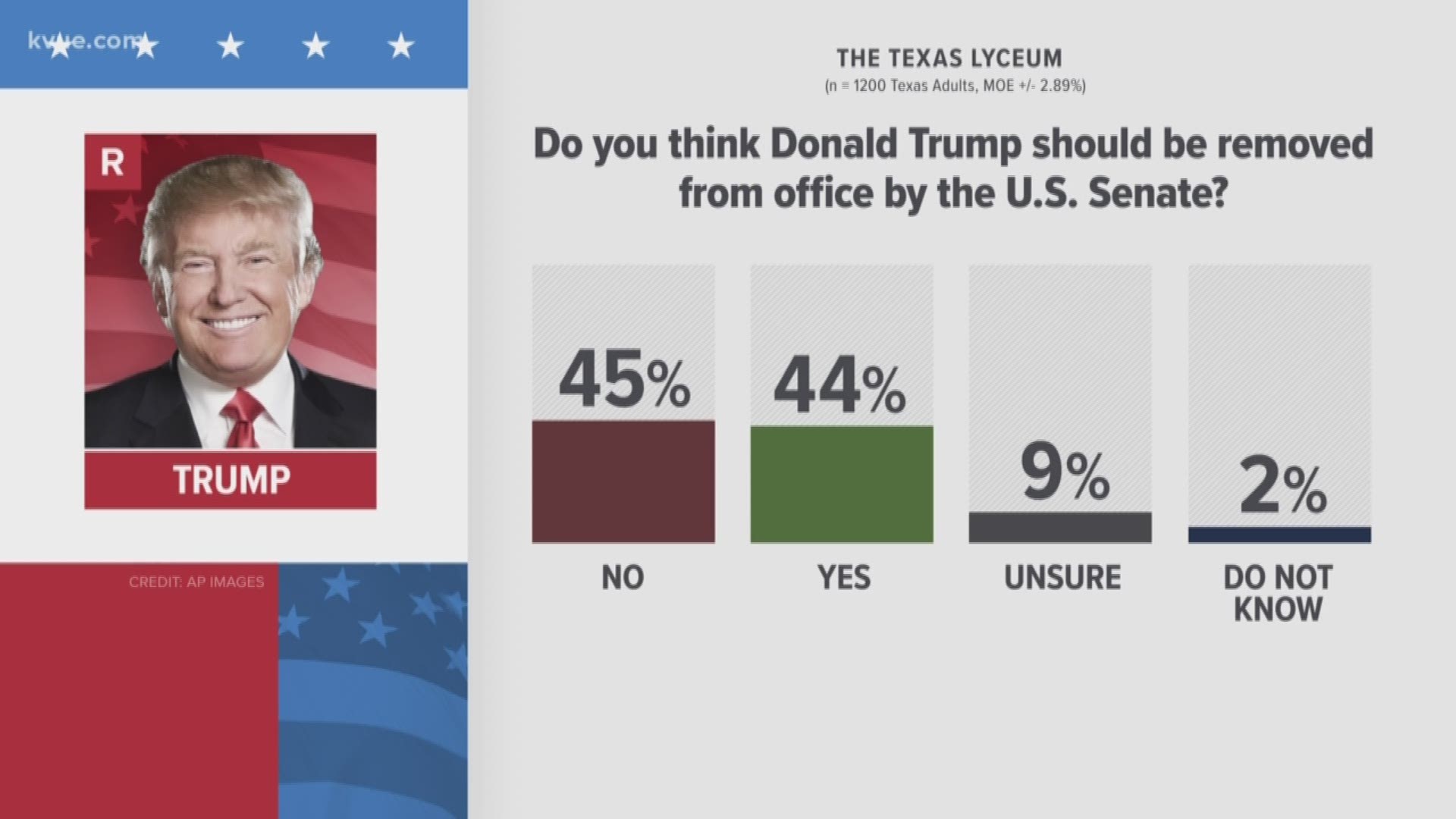 The results show former Vice President Joe Biden and Sen. Bernie Sanders are essentially tied to win the Democratic presidential nomination among potential Texas Democratic voters. Biden polled at 28% and Sanders at 26% with a margin of error of +/- 4.89%. Senator Elizabeth Warren polled at 13%, former New York Mayor Mike Bloomberg came in at 9%, Mayor Pete Buttigieg got 6% and Senator Amy Klobuchar came in with 4%. The other candidates all received less than 4% and 7% of likely voters polled say they are undecided.

The poll also showed that President Donald Trump holds a 4% to 8% lead over the Democratic candidates among Texas adults. In hypothetical match-ups, Sen. Sanders trails closely behind President Trump at 50% to 47%, while Biden trails by 5 points at 51% to 46%, with a margin of error that's +/-  4.30%.

The poll also looked at the U.S. Senate race for Sen. John Cornyn's seat. The results showed none of the 12 Democratic primary candidates running for U.S. Senate in Texas have earned more than 11% of the vote in the survey.

Army Veteran M.J. Hegar is leading the pack with 11%, followed by state Senator Royce West with 8%. Activist Cristina Tzintzun Ramirez polls at 7% and Houston City Council Member Amanda Edwards has 6%. Michael Cooper, former Congressman Chris Bell, Victor Hugo Harris and Sema Hernandez all polled at 5%, Annie Garcia polled at 4% and Adrian Ocegueda at 2%. None of the likely voters said they would like to see Jack Daniel Foster or D.R. Hunter as the Democratic candidate to face Sen. Cornyn. The poll also showed 17% of the people polled don't support any of the candidates and 19% are unsure. The margin of error is +/- 4.89%

One of the Lyceum pollsters, Joshua Blank, said the results for the senate race in Texas remains undecided.

“Texas is always a difficult state for candidates to introduce themselves to the voters due to its sheer size and multiple, large media markets,” Blank said. “But, in a year in which the political oxygen has been sucked up by the Democratic Presidential Primary and impeachment, it’s clearly been a major challenge for those seeking to take on John Cornyn to break through with the Texas electorate."

According to the poll, Texans are split on whether or not President Trump should be removed from office following his impeachment. Approximately 44% of Texas adults wanted the Senate to remove the president from office compared to 45% who believe he should remain in office.

Comparatively, Gov. Greg Abbott has received a high approval rating amongst Texans at approximately 63% approving of the job he has done in contrast to only 34% who disapprove.

The Texas Lyceum's 2020 poll was conducted by Daron Shaw, a professor at the University of Texas at Austin, and Texas Politics Project Research Director Joshua Blank.