A spokesperson from the Trump campaign called it "reckless and irresponsible" for a member of Congress to share the public information in such a way. 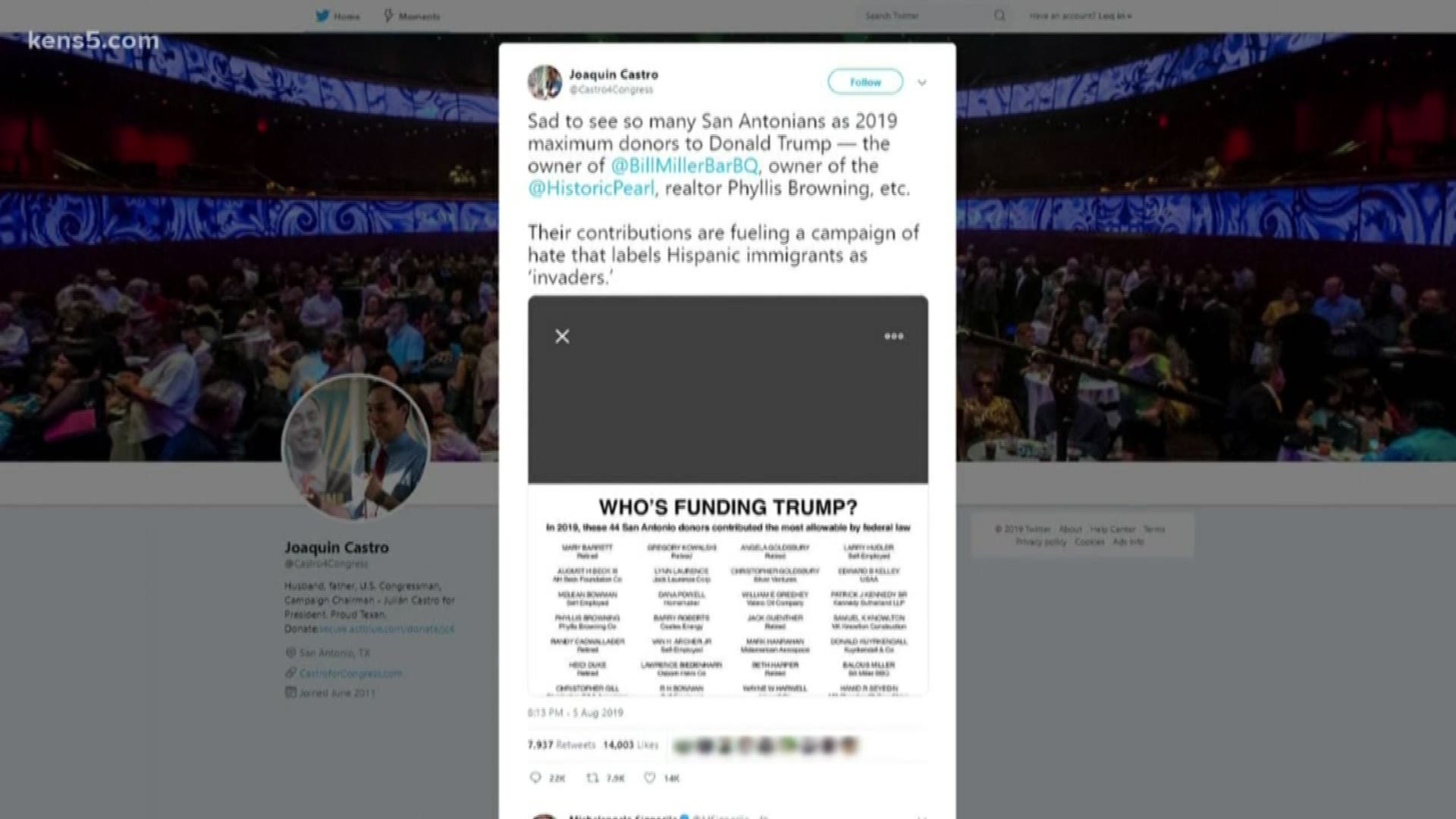 SAN ANTONIO — A Monday tweet by Congressman Joaquin Castro is drawing backlash, including some from the campaign to re-elect President Donald Trump.

Castro, who is the campaign chairman for the presidential campaign for his brother, Julián Castro, posted the tweet just after 10 p.m. on Monday. In it, he lists 44 San Antonio donors who made the largest legal donation to Trump's campaign.

The list includes the owner of Bill Miller Bar-B-Q, the owner of The Pearl, realtor Phyllis Browning, and others. Many are retired, private citizens, but information about their political donations are public information. Castro called out the donors, saying, "Their contributions are fueling a campaign of hate that labels Hispanic immigrants as ‘invaders.’"

"Bill Miller" and "Bill Millers" were trending on Twitter in San Antonio on Tuesday, as users grappled with the information that the owner of the popular restaurant supports Donald Trump. Some said they would go out of their way to eat there more in the wake of Castro's tweet. Others said they would avoid the establishment altogether.

On Tuesday, spokespeople from the Trump campaign condemned Castro's tweet. "While this is public information, it seems ill-advised for a member of Congress to publicly shame his own constituents for their political contributions," Dep. Press Secretary Sarah Matthews wrote in an email.

“Democrats want to talk about inciting violence? This naming of private citizens and their employers is reckless and irresponsible. He is endangering the safety of people he is supposed to be representing. No one should be targeted for exercising their First Amendment rights or for their political beliefs. He should delete the tweet, apologize, and his brother’s campaign should disavow it.”

Castro defended the tweet with a pair of tweets Tuesday afternoon, saying that his post was not endangering any of the people listed because no personal information was listed. He then doubled down, saying Trump's campaign has stoked fear of brown-skinned immigrants through Facebook ads paid for by campaign donations.

Panic ensues after report of shooting inside Baton Rouge Walmart