Texas Senator Paul Bettencourt filed a bill Tuesday that aims to offer property tax relief for homeowners, but many cities say the proposal will do more harm than good. 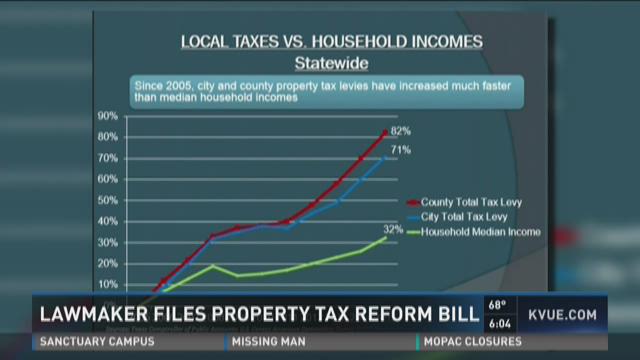 Ask any homeowner in Austin about their property taxes and you're sure to get the same answer; they're too high.

It's a problem Lieutenant Governor Dan Patrick says isn't confined to Austin, but is one all Texans are facing.

"People can't afford to live in their homes, not because of the principal and interest on their mortgage, it's because of property taxes that are going up two and three times their personal income," Patrick said.

Patrick appointed a senate committee, led by Senator Paul Bettencourt from Houston, to look into the issue. They released their findings Tuesday. The report states that from 2009 to 2015, the household median income for Texas increased 32 percent while the tax levies for cities increased 71 percent during the same time frame and it increased 82 percent for counties.

"Let me tell you what's going to happen," Patrick said. "You're eventually going to have a train wreck. People just can't keep affording this and we have to get it under control."

That "control" is coming in the form of a 50-page bill filed Tuesday by Bettencourt. It revises the property tax calendar and cuts the rollback rate in half.

The rollback rate is the maximum amount cities and counties can increase taxes without voter approval. It's calculated to allow the money used for maintenance and operations of a city or county to grow by up to eight percent each year. The bill would drop that to four percent a year.

"So what we're looking at is as values go up, tax rates need to come down. If the taxing jurisdiction wants to go for a higher rate than the rollback rate, they can schedule an election under this new property tax calendar and they can have that election in November," said Bettencourt.

The cities of San Antonio, Austin, San Marcos and New Braunfels – some of the fastest growing cities in the United States – would have lost at least $770 million over the past decade, under a proposal from some Texas legislators, while saving the average homeowner just a few dollars a month. The four percent revenue cap proposal, recommended by Senator Paul Bettencourt, Chairman of the Senate Select Committee on Property Tax Reform and Relief, would severely impact these fast-growing cities’ ability to provide critical services for their growing populations. The region is expected to see continued exponential population growth, creating even greater demands for public safety, safe roads and infrastructure that fosters continued economic development.

“Texas cities are the economic engines of our state and are the level of government closest and most accountable to the people. City officials best understand the unique facets of their communities and should continue to have the ability to manage their budgets responsibly to provide critical services,” said San Antonio Mayor Ivy R. Taylor. “Texas officials, who often champion limited government, know that government is not one size fits all and should allow municipalities to continue to best represent their constituents.”

The region is home to two of the fastest-growing counties in the nation, Comal and Hays, and demographers expect the metropolitan area’s population to grow by nearly 34 percent by 2030. The United States Census found that New Braunfels is the second-fastest growing city in the nation and the surrounding cities from San Antonio to Austin are expected to form a Metroplex similar in size to the Dallas-Fort Worth metropolitan area. The mayors of these cities have united to plan for the incoming growth and viability of the I-35 corridor.

“We should not risk police, firefighting, EMS, parks, safety nets and transportation projects – all to save Austin homeowners only $2.69 a month. It’s risky and not real tax relief,” said Austin Mayor Steve Adler. “If the legislature really wants to help local taxpayers, it should better fund education because that’s most of the Austin property tax bill.”

The Senate Select Committee on Property Tax Reform and Relief, chaired by State Senator Paul Bettencourt, today announced a proposal to limit the financial decisions municipalities make by imposing a stricter property tax revenue cap. The committee has stated that city property taxes are increasing by making an inaccurate comparison between median household income, which increases due to inflation and total property tax collections, which have increased mostly due to new construction. There is no statistical relationship between median household income and property tax collections. The total amount of property taxes levied by Texas cities only increased 19 percent from 2009 to 2014. During this time period, state revenues increased by 46 percent, according to the Texas Comptroller.

“The state’s proposal would negatively impact every resident who wants a street repaired, every neighborhood that seeks better police protection and every business that needs improved infrastructure to better serve their customers,” said San Marcos Mayor Daniel Guerrero. “Texas cities are thriving and this proposed legislation would stunt the progress we have made."

The proposed four percent revenue cap on cities would not provide meaningful tax relief as cities collect just 16 percent of the property taxes levied in the state, according to the state comptroller. Most of the property taxes paid by Texans, 55 percent, go to school districts. The cumulative impact of a four percent revenue cap would have cost San Antonio, Austin, San Marcos and New Braunfels more than $770 million over ten years.

Under the State’s proposal to cap city budgets, the average homeowner in some cities might only save $2 or $3 per month, while cities will lose millions in revenues every year.

“New Braunfels is experiencing more rapid growth than it has ever in its almost 175-year history. It’s unprecedented. And I realize we are a part of a larger region that is having the same experience,” said New Braunfels Mayor Barron Casteel. “And as a region, we must work together to address the issues that don’t recognize governmental boundaries. That’s why I’m glad this coalition has come together to address a matter that is vital to the current and future health of our communities.”

Restricting city budgets would not address the real cause of high property taxes, which are the school finance system and the appraisal process.

Specifically in Austin, the city calculated the numbers and found the bill would save a family with a median priced home of $256,442 just $2.69 a month, but would cut $15.4 million from the budget. That money used to offer services and fund public safety. The city released the following statement on the bill:

Today, the State’s Senate Select Committee on Property Tax Reform and Relief released its interim report. Among its recommendations is a proposal to cap the additional amount of property tax revenue a city can generate at 4 percent. Such a cap would limit the City of Austin’s ability to fund essential city services.

“We have run the numbers for 2016. The proposal results in a tax cut of $2.69 a month for the average homeowner in Austin and cuts $15.4 million from the city budget. This will make it difficult for the City to provide the quality of services that Austinites have made clear they expect,” said Interim City Manager Elaine Hart.

According to Mayor Steve Adler, the 4% property tax cap would force the City Council to cut essential City Services.

“We should not risk police, firefighting, EMS, parks, safety nets and transportation projects – all to save Austin homeowners only $2.69 a month. It’s risky and not real tax relief,” said Adler. “If the legislature really wants to help local taxpayers, it should better fund education because that’s most of the Austin property tax bill.” (Note: City property taxes are only 20% of the overall Austin property tax bill.)

The Texas Municipal League has also come out against the bill, stating in order to achieve real property tax reform the state needs to put more funding into schools. Senator Kirk Watson gave out a sobering statistic on that Tuesday when he noted for homeowners in AISD, 36 percent of the property taxes paid to the district goes back to the state, out of the Austin community, for recapture.

The Senate is expected to take this issue up during the next Legislative Session starting January 10, 2017.