Among other things, the proposed form of city government would include the removal of the city manager position. 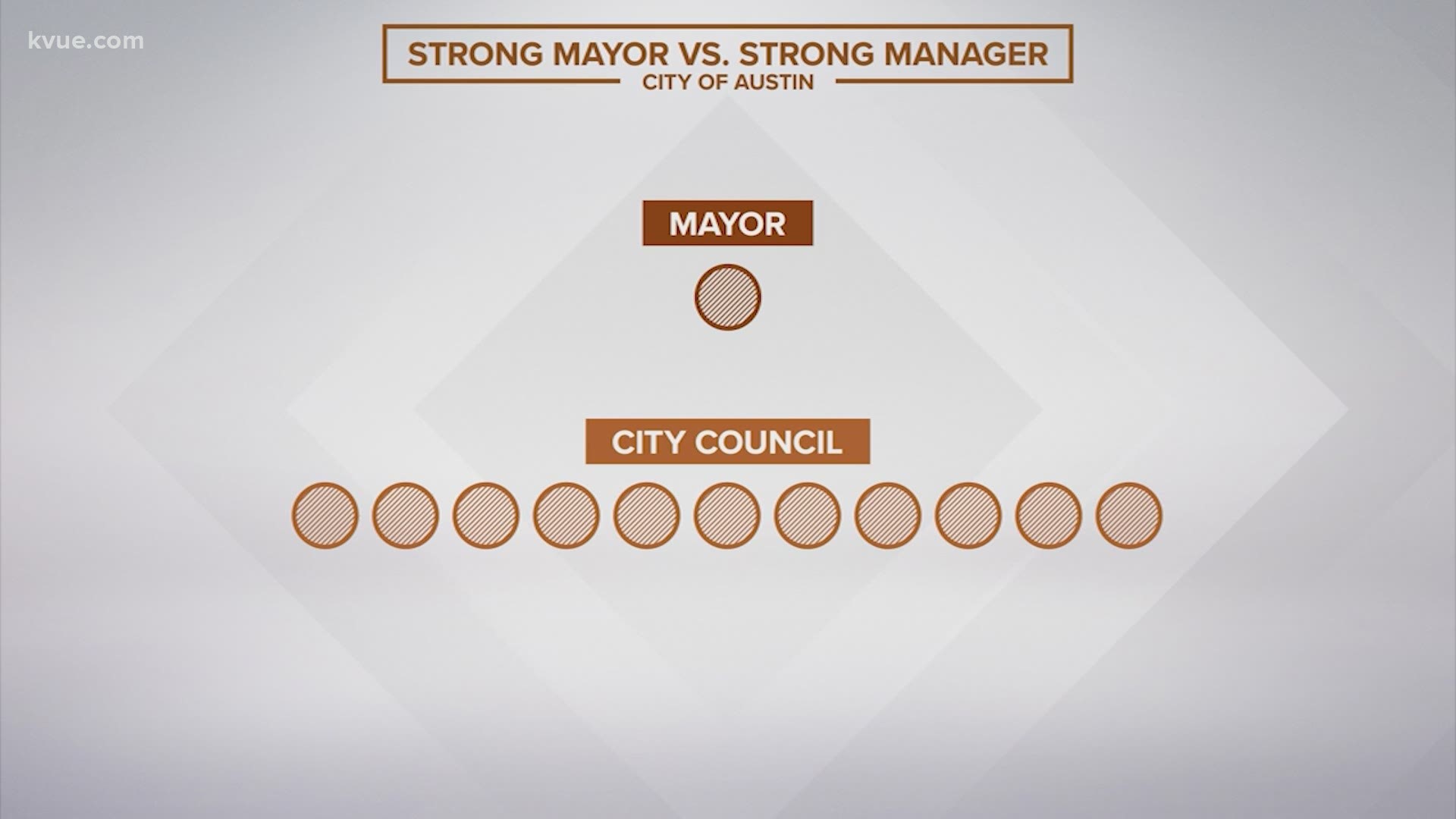 AUSTIN, Texas — The local group Austinites for Progressive Reform (APR) is hoping to someday have a new form of city government operating in Austin: a "mayor-council" system, otherwise known as a "strong-mayor" system.

After filing a petition with 24,000 signatures, the group said last week that it had received a Certificate of Sufficiency from City Clerk Jannette Goodall, meaning the petition has now been certified.

The Austin City Council is expected to vote on whether or not to call an election and determine ballot language regarding the proposal. The deadline to set the ballot for the May 1 election is Feb. 12.

KVUE spoke to groups both in favor of and opposed to the proposed form of government.

Right now, Austin's city government operates under what is called a "council-manager" form of government. There are 10 city council members who each represent a district and the mayor, all of which are elected officials.

A city manager is employed by the city government, appointed by the city council. They carry out the council's policy objectives and are in charge of big areas like the city budget.

In Austin, the city council voted to select Spencer Cronk as the city manager in December 2017. According to the "about" page for the Office of the City Manager, Cronk is responsible for, among other things, "the day-to-day operations of an organization of more than 14,000 employees and a budget of $3.9 billion."

To name a few, Austin, Dallas, San Antonio and El Paso all operate under the "council-manager" form of government, according to the National League of Cities.

Credit: TEGNA
Currently, the City of Austin runs on a "council-manager" form of government.

But the local group Austinites for Progressive Reform (APR) wants a "mayor-council" government, also known as the "strong mayor" form, which would eliminate the city manager position.

Houston currently operates under a "mayor-council" form of government.

According to APR's website, where you can also find a draft of the proposed amendment, if this form of government is established, the mayor would no longer serve as a member of the city council and the amendment would provide for the creation of a new single-member council district, which would increase the number of city council members from 10 to 11. This is in order to prevent tie votes.

"Council alone will control the legislative agenda," according to an outline from APR detailing what the forfeited powers by the mayor would look like.

Additionally, the mayor would no longer have the power to vote on any matters before the council, and resolutions could be enacted with review from the mayor, among other things.

The mayor would also have veto power, and the council would be able to override the veto. Appointing department heads would also fall into the hands of the mayor.

Advocates say Austin's current system is linked back to a charter revision campaign from 1924 by Monroe Shipe – the developer of Austin's Hyde Park which, at the time, was said to be advertised "for White people only."

Credit: TEGNA
According to local group Austinites for Progressive Reform, the "Mayor-Council" form of government would remove the City Manager position, and add an 11th district to the Austin City Council.

Support for the proposed "mayor-council" form

KVUE spoke to Nelson Linder about the mayor-council proposal. He is the president of the NAACP in Austin and the co-chair for Austinites for Progressive Reform, the group backing this proposed form of city government.

To explain how some things would look under a mayor-council government, he used the city budget as an example.

"So, in this system of government, the mayor is the chief executive. So, once he proposes a budget, he doesn't just get to implement it, it goes to the council. So, there's still cooperation," Linder said. "So, I think it's important to understand that in this system, there are still checks and balances that ensure nobody has a monopoly on power."

He added that he believes this type of government would work better as Austin continues to grow.

"So, I see it as a more relevant government based on where we are in 2021. So, it shouldn't be a threat – it's just a form of government that is more democratic," Linder said. "Yes, it will look very different because I just think that, given our current predicament, it's been that way for a while now. We need strong leadership that's accountable to the people. We don't, we don't elect a city manager. He's OK with me, but I think we need to have elected officials who take responsibility that – and that way, guess what? We hold him accountable. People say, 'Well, what if he's a bad mayor?' Well, then you don't vote for him next time."

He also said while he believes the proposed system has checks and balances, the idea is more about cooperation.

"So, in this system, the mayor has to bring people together. And I think he can or she can. But also the council has a larger responsibility. You [have] got to make sure you inform your voters, be involved and also ensure that you can build a relationship with the mayor, whoever [that] might be to get things done," Linder said. "We need to get things done in this city. Despite all of the advantages, there are still major challenges."

Opposition to the "mayor-council" system

According to the local group Austin for All People's website, its purpose is "to oppose the proposed charter amendment that would radically change the City of Austin’s governance system by replacing the current council-manager form of government with a strong mayor form of government."

KVUE spoke to Jesús Garza, a member of the group and a former city manager of Austin. He explained that he believes the current system works in part because he says politics are taken out of the equation of administration policy.

"When the council makes decisions, the mayor and council make decisions, it's really the job of the city manager and the assistant managers and the directors to execute that policy without any interference from politics. It's just to go get that work done that needs to get done. In addition to that, the people that get hired in these positions throughout the City of Austin are highly trained," Garza said. "But it's effective in delivering services to the community. And so, the council then can focus on policy, the big issues that are important for the community, the vision for the city and then it's really the job of the administration to take those actions and whatever dollars are appropriated just to execute that policy, to achieve those objectives."

He added that he believes the proposed form of government could add politics to the City administration, using the example of granting the mayor the power to appoint department heads if the new system were in place.

"The mayor would be able to make those appointments and, by definition, they can remove those appointments and put in new people whenever the circumstances might dictate. And what ends up happening is the council is not part of that process. They're not part of the process now, but by allowing the political figure to do it, [it] really does introduce politics into the administration of the city," he said.

Garza added that decisions would potentially be made quicker under the new system – but if they are made quickly, he warns, there may be a lack of planning for the long-term impact. He explained that when an item is being considered that has fiscal implications, the council turns to the city manager and other department heads to handle the cost and provide some type of report or additional detail.

"And I think if you have political appointees in these positions, I don't know that that will work as effectively. For example, I mean, I think you could make a decision that would be based on politics because of pressure. And so, expediently, you would, you would say, 'Let's go do this.' And in the long run, that might cost the citizens more money, might cost the city taxpayers more money," he said. "But you took care of an immediate political problem. But in the long run, you really didn't. You didn't address it with that kind of long-term view that's so critical."