Spend any time in any neighborhood and you know how important it is that cars drive slowly.  It can mean the difference between life and death which is why Austin Rep. Celia Israel filed a bill to lower the speed limit in urban areas. 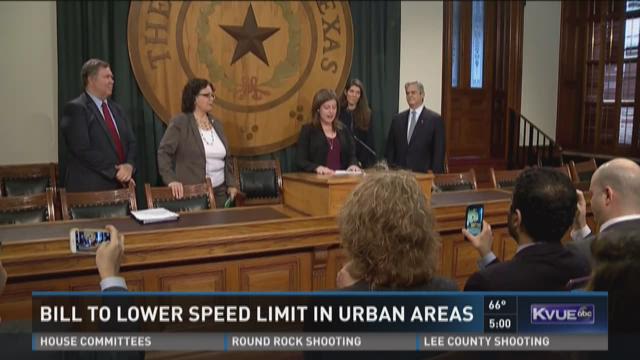 Rep. Celia Israel (D-Austin) has filed House Bill 1368, which would lower the default speed limit on neighborhood streets in urban areas from 30 miles per hour to 25.

Kathy Sokolic - a supporter of the measure - shared her nephew's story at the Texas Capitol. Ben Sears was 9 when he was struck and seriously injured in Austin's Mueller neighborhood.

"Wicked smart, silly as all get out, very focused," said his aunt Kathy Sokolic. "He loved putting LEGOs together, he loved reading."

Then, in the blink of an eye, that all changed.

"He can't speak, he can't eat. He can barely move on his own," Sokolic said.

The life-altering change is the result of a traffic crash that happened right across the street from Ben's front door.

"The driver was going westbound," Sokolic described, "and Ben was just getting out of the car and stepped in front of the truck."

There's not a speed limit sign on Ben's street so by Texas law, drivers can go 30 miles per hour. The crash left Ben with broken bones, bruises on his heart and lungs, a brain injury and a broken neck.

"That should have killed him. But it didn't," Sokolic said.

Now 10-years old, Ben lives in a Dallas medical facility with around-the-clock care while his parents, grandparents, Sokolic and her husband remain in Austin. Each taking turns traveling to Dallas to be with him.

While he fights to heal, Sokolic is fighting for change.

"We only meet every two years and we have the power to take what should be a bi-partisan issue and make this happen," Israel said during a news conference Thursday.

Israel couldn't finish her sentence before the room burst into laughter. They all knew what she was getting at, that she hopes they too can back her bill. And already, the cities of Houston and Austin are.

"The studies show that if we reduce from 30 to 25 on those small neighborhood streets, the chances of survival for someone involved in an accident is almost 50 percent better with just that five mile per hour difference," said Austin Mayor Steve Adler, citing data from AAA Texas.

Ben's aunt and grandmother will always wonder how that difference could have changed his life.

"It's very possible they simply would have seen each other. That's what you hope for," said Ben's grandmother Candyce Buyrne. "The reaction time gives you time to see each other and avoid."

"The driver could have swerved, Ben could have stepped back," added Sokolic. "If we can help prevent anyone else from having to go through this, it's, it's a victory, it's a win."

The driver who hit Ben did stop and was not cited by police.

Ben's family believes the bill won't only help victims, but also drivers who often have to cope with the effects of tragic crashes as well.

GO HERE to follow the progress of HB 1368 in the Texas Legislature.