Here's what that means for taxes, homelessness and the Austin Police Department. 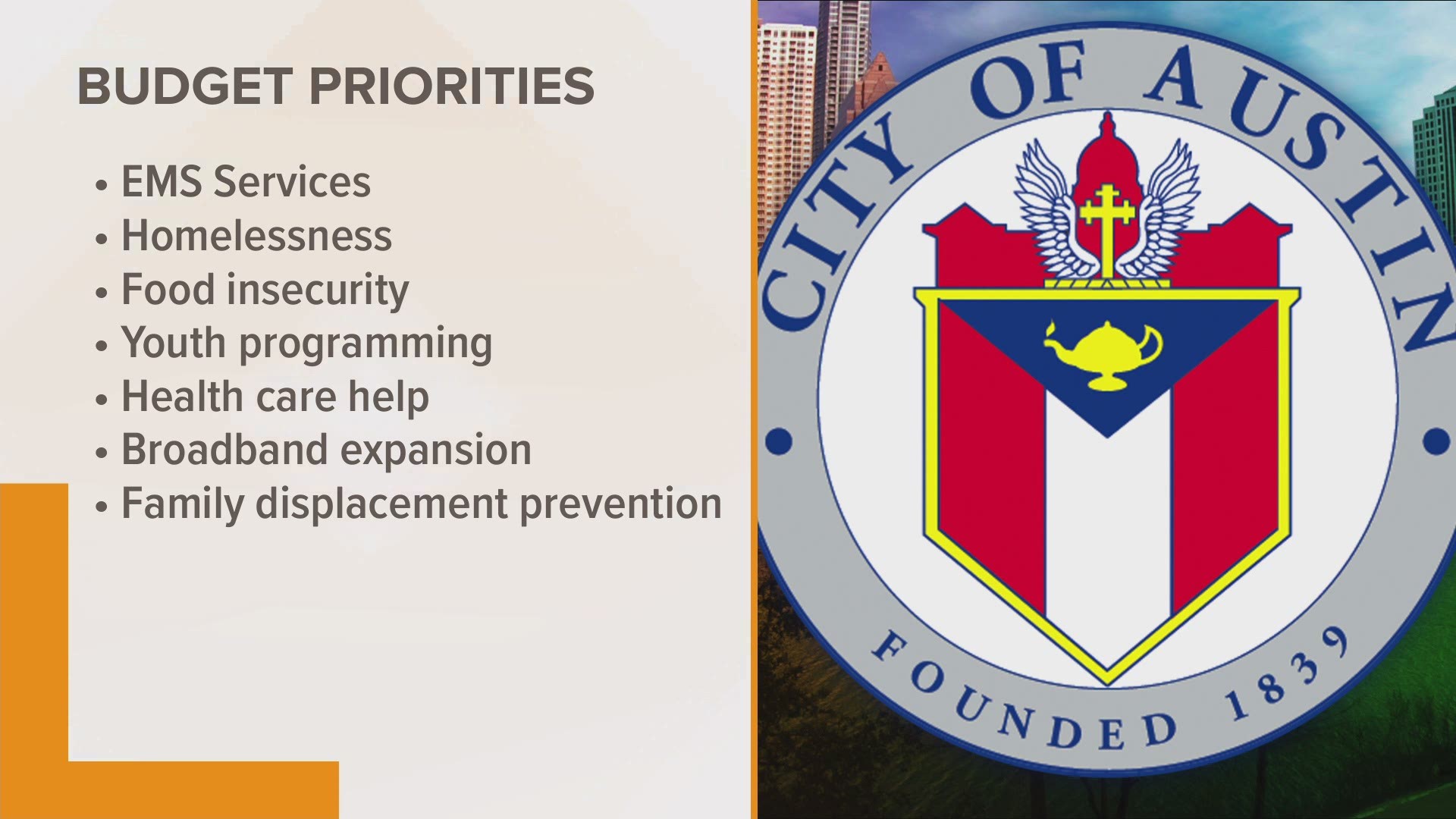 AUSTIN, Texas — Austin City Manager Spencer Cronk released the proposed city budget for the fiscal year 2021-2022 on Friday afternoon. The budget is based on a .85% tax and fee increase, equivalent to just over $3 per month, in Austin.

To start "fundamentally reforming how we deliver public safety in our community," $6.2 million is proposed to fund the 144th class and future classes of the "reimagined" Austin Police Department Training Academy.

About $29.1 million is allocated to "maintain and advance progress on Reimagining Public Safety."

Homeowners can expect a reduction of about $9 in the City's portion of their annual property tax bill for the 2022-2023 fiscal year, according to the press release.

This would be the lowest tax and fee increase in Austin since the 2015-2016 fiscal year.

Cronk said the City will end the 2021 fiscal year with a revenue surplus. He said sales tax and property tax revenue are projected to end significantly above budget. However, other revenue sources are expected to end the year below budget.

“The good news is that, economically, Austin, Texas has come through the many challenges of the past year in as good, or better shape, than any big city in America,” Cronk said. “Our local economy is fundamentally strong and performed unexpectedly well during the COVID pandemic, with more positive impacts for our budget than we anticipated even a few months ago.”

Austin Mayor Steve Adler said he is pleased many of his priorities, including homelessness and public safety, are reflected in the proposed budget in a press release. Adler said this is the second time a reduction in property taxes will happen during his term as mayor.

Councilmember Greg Casar said he was pleased with the homeless budget but not happy about moving some departments back under the police department's umbrella.

Casar said with over $100 million in federal money and $65.2 million from the proposed budget, the city has a chance to crack down on homelessness truly.

Despite federal funding that has aided COVID-19 relief over the past year, Councilmember Kathie Tovo (District 9) said the upcoming budget is going to be tight due to state-imposed revenue caps, among other legislation.

During the legislative session in 2019, Gov. Greg Abbott approved bills that would reduce the amount that property tax revenue can rise and limit franchise fees the City can collect. The governor also passed legislation during this year's session that would place financial penalties for cutting police budgets, which could impact further discussions about the Austin Police Department's budget.

In accordance with House Bill 1900, the proposed budget allocates more funding to the APD's budget than in 2019. The newly passed legislation urges the City to restore police funding levels to two years prior.

RELATED: Gov. Abbott signs handful of bills designed to 'back the blue'

In June, the Austin City Council recessed for six weeks while leaders prepared their budget priorities.

Multiple city council members, including Tovo, Vanessa Fuentes (District 2) and Paige Ellis (District 8), have shown their support for increasing funding for EMS services. This comes after one person was killed and 13 others were injured in a mass shooting last month.

"We actually received the communication from the EMS Association just right before the mass shooting on Sixth Street. And so, that was clearly a need they had identified even prior to the, to that incident," said Tovo, whose district includes Downtown Austin.

When asked whether or not APD's budget will be readdressed, Fuentes said the council will likely discuss it.

"The biggest part of a city budget is investing in public safety," Fuentes said. "We want to ensure that we're compliant with the new changes in state law."

The city council will provide time for public input and budget work sessions in the near future.

Community input meetings will be hosted on July 22 and July 29 before the budget deadline on Aug. 1. Some city council members will also host their own town halls for community feedback. Tovo, for example, will host one for District 9 on July 19.

Mayor Steve Adler released the following statement after the budget proposal was unveiled:

“I’m pleased the proposed budget reflects many of the priorities I had discussed with the City Manager during his budget preparation, including homelessness and public safety, as he met with my colleagues and me on the Council.

“Despite all the political rhetoric, the Governor’s “defund” legislation (HB 1900) has almost no substantive impact on the proposed budget’s spending on policing, thus demonstrating once and for all, the Council’s action a year ago was not a “defunding” of policing.

“The proposed budget would preserve and continue the $27.2 million moved last year to other public safety initiatives, (for EMS, domestic violence victim support, etc.), would continue into next year the already restarted cadet classes, and moves forward with new initiatives that have come out of this year’s community conversations on public safety.

“The approximately $130 million additional spending on policing, subject of much of the disinformation concerning last year’s Council action, was never actually diverted from policing and, with mere changes to accounting labels, continues to be a part of this year’s proposed budget and maintains virtually the same policing functions and personnel as has been for some time.

“The political rhetoric that keeps alive the false claim that the Council moved $150 million away from policing in 2020 has always been a lie.

“I look forward to the Council discussions in the coming weeks to finalize the budget.”

Other budget highlights include:

The City said the budget would also have the following impacts on taxpayers:

The City of Austin also provided the following links:

The new budget will take effect on Oct. 1. To learn more, click here.