While many pro-choice groups filed into city hall Monday to show their support, many pro-life advocates say the money should be spent differently. 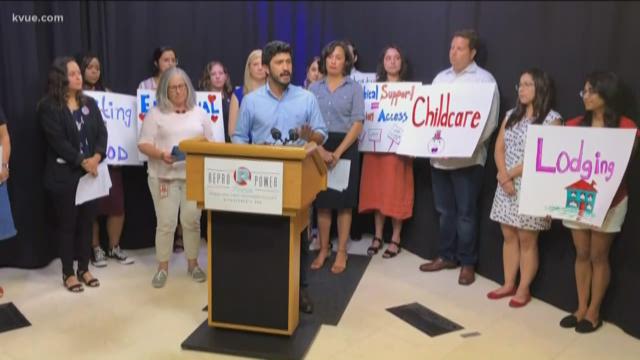 AUSTIN, Texas — Austin City Council members and pro-choice groups filed into city hall Monday to voice their support for up to $150,000 to be put towards helping out with abortion access.

The money would be part of next year's City budget and could go towards services like transportation, childcare and lodging.

Some of the city leaders said at the press conference that this was in response to a new law state lawmakers passed this spring. It restricts Texas cities and counties from giving or using taxpayer dollars to partner with abortion providers.

"... today we are announcing that Austin is fighting back," said Austin City Council Member Greg Casar.

“The actions that were taken at the State Capitol not only at this session but numerous previous sessions is what has laid the groundwork for us to be as creative as we possibly can," said Austin City Council Member Leslie Pool.

“This is just another example, I think, of your city leaders being approached by advocates who say there is a need in the community, there is a need for this kind of funding, and for us to be able to support something," said Garza.

If this part of the budget is approved, the City says groups would have to apply for funding. The City's Public Health Department would help with distributing funds.

Some pro-life advocates believe the money should be spent differently.

Andy Hogue, the communications director for the Travis County Republican Party, said this is an ongoing debate.

"In this case, we're giving people an incentive to seek out abortion – not adoption, not other options – but to seek out an abortion first and foremost," said Hogue. "This won't end anytime soon, but perhaps it may end in yet another legislative bill or governor executive order. We'll see what happens."