"The more expensive it becomes to live in the city, the more people we're going to see that fall into homelessness," said Adler. 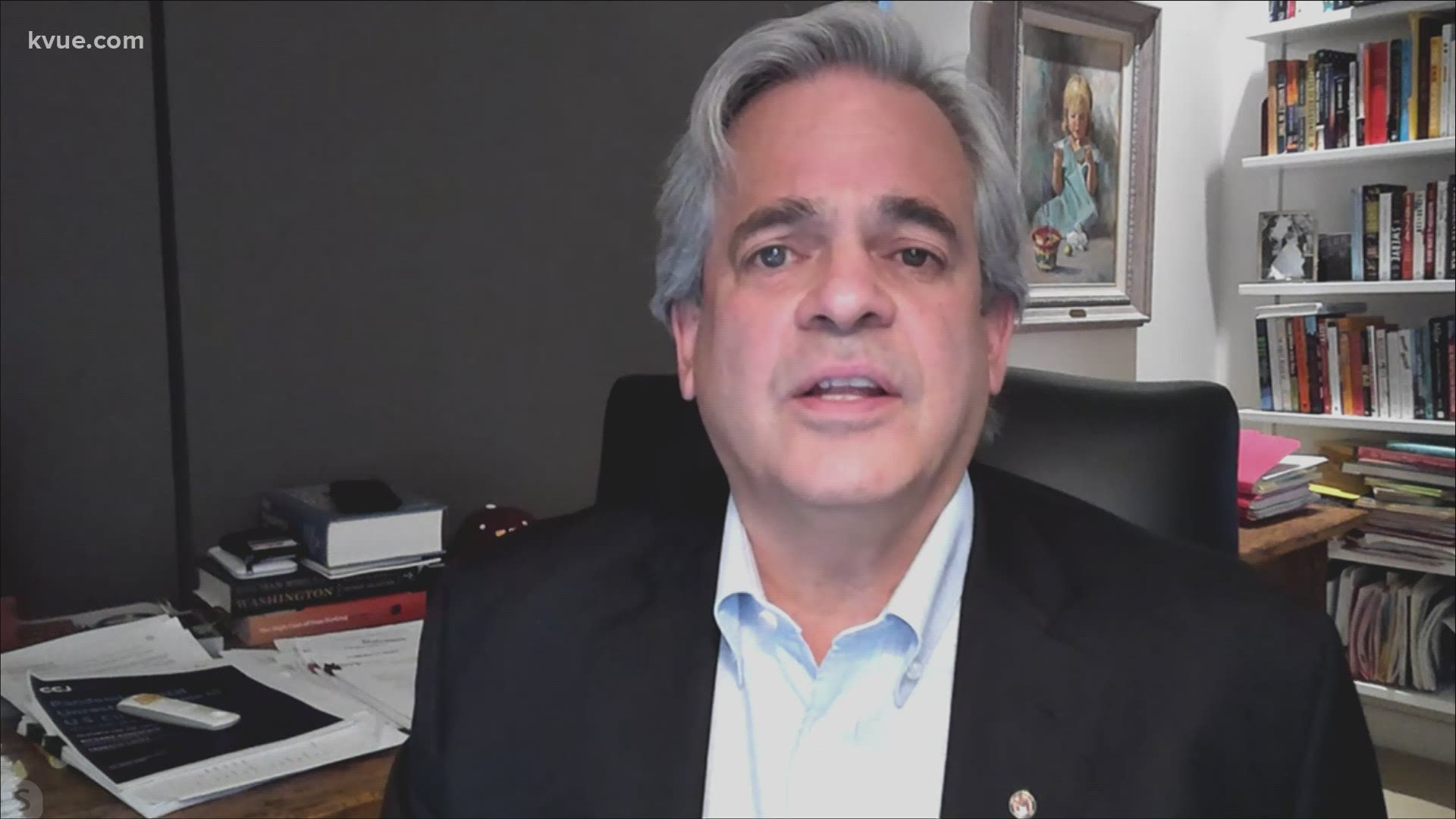 AUSTIN, Texas — Over the past two days, Texas Gov. Greg Abbott has been rather outspoken regarding actions from the City of Austin over homelessness and policing across the city.

For context, the Austin City Council in 2019 voted to decriminalize homeless camping in certain areas across the city. While the issue has continued to make headlines ever since, on Wednesday night, the governor tweeted that if Austin doesn't reinstate the ban, Texas would.

Another example: In 2020, the council voted to reallocate some funding from the Austin Police Department after nationwide protests regarding police brutality. In Austin on Thursday, the governor held a roundtable discussion where he stated that he plans to make it "fiscally impossible" for the city to continue defunding the police.

Terri Gruca: First of all, what do you make of the governor saying if Austin does not reinstate the camping ban, he will?

Adler: Well, certainly we can't control what happens at the state level. But the answer to homelessness is not to hide it. It's not to send people back to the streams, into the woods. It's a dangerous place for them to be. Conditions in those places are just absolutely horrible. Folks are safer now. They're able to get services. But what we're doing right now isn't right either. There's got to be a better way and we need to find it. Going back to where we were before, banning camping, is not the right answer. But we have to do a better job of coming up with the long-term plan, so everybody in the community knows how long it's going to take and measure progress over time. And we have to do a better job in the short term of managing shared public spaces.

Gruca: I know that one of the solutions previously was these hotels that the City spent millions to house the homeless. Are they still just being used to house people who may be at risk for getting COVID-19? And what is the plan moving forward to maybe change that?

Adler: Well, we need to tackle the virus. And, certainly, COVID has stalled that effort, and being able to devote motels to folks that are experiencing homelessness because we've had to use them for isolation facilities and protective lodges. With that said, we've still been able to bring some of the people in our community experiencing homelessness and get them into permanent supportive housing. But we need to significantly accelerate that program. Buying the old motels is one of the most efficient ways for us to have that kind of space. There are two more that are going to be put on the agenda, that are on the agenda for the council for the end of the month, and I'm encouraged to see that we're picking this back up again. We don't want people camping and in tents anywhere in our city, which means we have to get them housed.

Gruca: So is that the solution then, finding more hotels to possibly put them in?

Gruca: Isn't this really an affordability issue? I mean, often Austin affordability has been a challenge. I think you see people moving out to the suburbs with their families. We're struggling at AISD to keep kids there in the school district. So how do we address that?

Adler: Affordability is a huge issue. The more expensive it becomes to live in the city, the more people we're going to see that fall into homelessness. There are a lot of things we need to be doing to address affordability. You either make housing cost less or you help people have more to spend. We need to increase the supply of housing in our city, all kinds of housing in our city right now. There's not enough to go around. Houses are not on the market for very long because the demand is so great. But we also have to increase the number of middle-skilled jobs that we have in our cities so that more people can afford the homes that are here. And this is a council that, and the community, through bond elections, taking steps to dramatically increase the supply of housing, working with Workforce Solutions, working with new businesses like Tesla that are bringing in middle-skill jobs that don't necessarily require a four-year degree. Affordability, huge issue and a tough one to crack.

Gruca: And speaking of that, the governor also talked about fiscally punishing cities like Austin that take money away from police departments. What is your response to that?

Adler: And I'm not sure exactly how that works. Austin is a safe city. We're the safest big city in Texas and one of the safest cities in the country. And it's important that we do everything we can to be able to maintain that position. And that's the conversation we're having. The Texas Tribune recently did an article pointing out that Austin pays more per capita for its police than any other major city in the state does. And we do that because we recognize the importance of police, and then we're willing to pay to have the best police officers in the country. But public safety involves more than just police. And we have to figure out in our community what works to make us even safer than we are now. That has to be our constant push, to keep an already safe city even safer.

Gruca: You do acknowledge, though, that the crime rate has been trending up even for our city, just based year-to-year here, even though it is one of the safest cities in the country. And we're also seeing more officers retire. Are you worried about that?

Adler: It is true that crime rates are going up in Austin, and any increase in crime rates is a concern that's happening in cities across the country during this pandemic. And when you have a city like Austin, where the crime rates are so low, even a small increase is going to be a big percentage, even if it's not big in absolute numbers. And that's what we see in Austin. I am concerned about the number of police officers that are leaving the force. We have, you know, 1,400 police officers in the city, actually maybe 1,800 and there is a certain amount of attrition, which is normal, but we are seeing high numbers. That's one of the reasons why I support having a cadet class just as soon as we can fairly and properly get one impaneled, in part because of those numbers, in part because I think that the cadet classes give us the opportunity to have cultural change agents put on our force. But in order to do that, we have to make sure that we have a curriculum and a program that reflects the values and the culture in our community.

Central Texan charged for participating in US Capitol riot