Joe Chacon, who served as interim chief, will step into the permanent role in a particularly critical time. 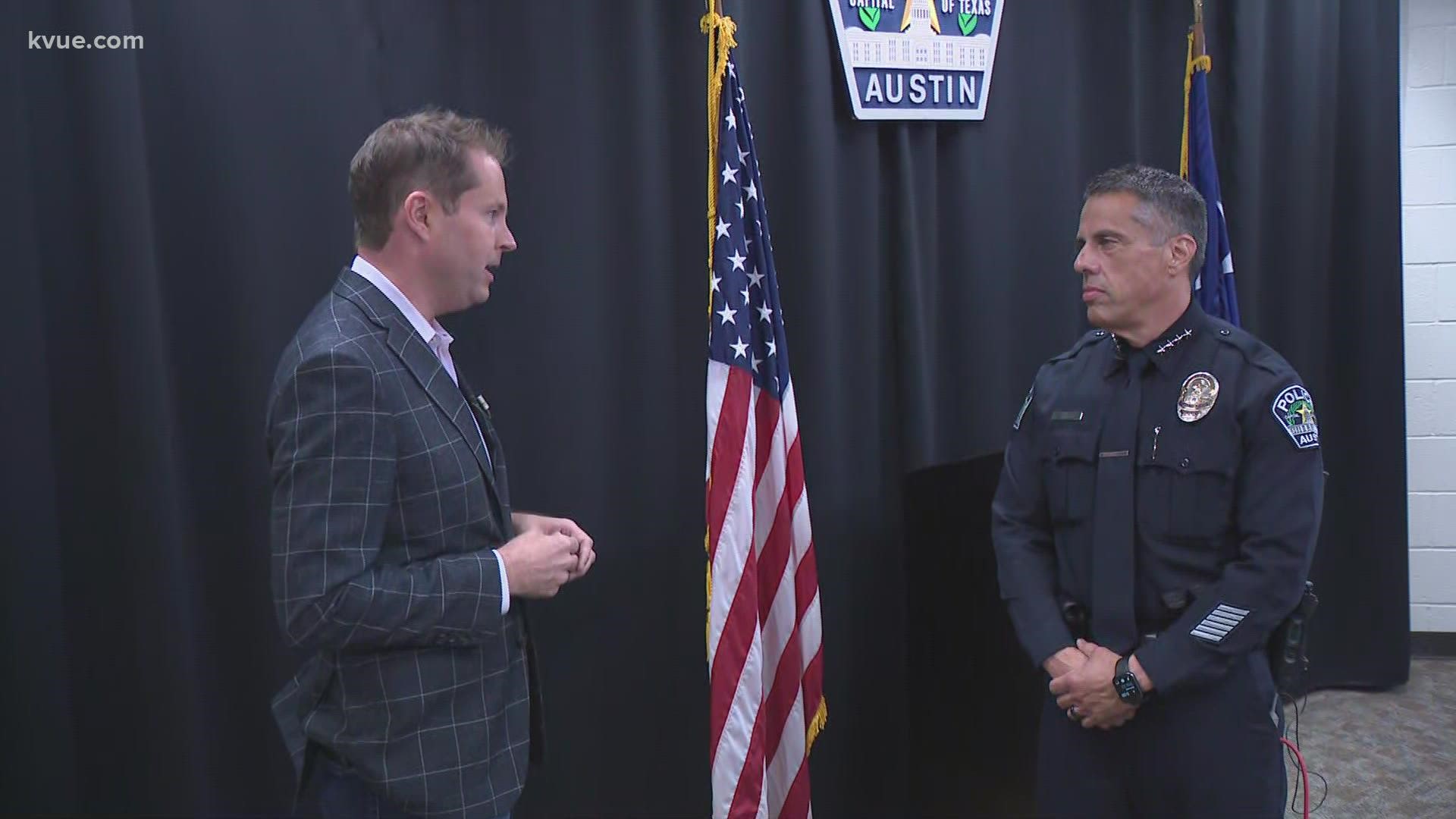 AUSTIN, Texas — Austin interim police chief Joe Chacon will step into the role permanently, officials announced Wednesday, taking the helm of a department that is in the midst of reform and battling a spike in homicides and gun violence.

Chacon will be the second internal candidate Cronk has promoted, but many had expressed the desire for an outside chief after the departure of the previous chief, Brian Manley, in March.

At a press briefing in which Cronk formally announced the new chief, Cronk recognized "we still have a lot ahead of us," but the City will work with Chacon to get there.

"The Austin Police Department is at a crossroads, and APD's relationship with the community needs a reset," Chacon said at the press briefing.

He said he has heard complaints from the community about a lack of communication, trust and collaboration necessary to engender a relationship Chacon said everyone wants with police.

As interim chief over the last six months, Chacon said that he has made a number of changes that demonstrate that effort.

He has changed the department's policy in releasing video, reducing the timeline from 60 days to 10 days, "showing a strong commitment to transparency."

He also said he has started a police cadet academy with a new training paradigm that shifts from military-style training to a learning academy. He has also started a program to address gun violence.

He thanked his family for the support the last several months and he saved "my last and greatest sense of thanks" to all the officers in the APD. He said Austin remains one of the safest big cities in the U.S., and it's all thanks to them.

"I hope to make you proud as your next chief of police," he said.

Credit: Scott Guest
Moments after the formal announcement was made, Chief Joe Chacon spoke to the public about his plans.

The Austin City Council must still confirm Chacon and is expected to consider his appointment on Sept. 30.

Cronk appointed Chacon as interim chief after Manley's departure, bypassing Manley's chief of staff for the temporary role. Chacon, who has previously been a finalist for chief jobs in Boise and Waco, then applied for the job during a national recruitment effort.

In recent weeks, he participated in a forum with the two other finalists and increasingly began receiving community support. Notably, some in Austin's activist community did not favor Tingirides, who at times was considered to have the inside track for the job. Also notable is that the Austin Police Association has publicly supported Tingirides and in recent weeks has mounted a behind-the-scenes campaign against Chacon.

Chacon will step into the permanent role in a particularly critical time. As the KVUE Defenders highlighted with the Austin American-Statesman in its recent series "Reforming the Force," the city is still struggling to reach a community consensus in what it wants in a modern police force. Last year, Austin City Council members removed about $150 million of the police budget by reallocating numerous programs to create independence.

Council members also cut three cadet classes to give the police academy time to transition from a military-style boot camp to adult learning. As that happened, however, more than 130 officers have left the department, leaving officials to move officers from specialized units to make sure they had enough on patrol.

In November, Austin voters also will consider a measure to establish a minimum police staffing level.

Austin also recently recorded its highest number of homicides in more than 60 years, while the rate compared to population growth also has spiked. And a report this spring about gun violence in Austin showed a substantial increase in recent years.

Chacon has worked in law enforcement for 28 years. He was appointed assistant chief in 2016 and has worked in multiple Austin police units, including homicide, child abuse and sex crimes. KVUE's Yvonne Nava sat down with Chacon in recent months. Watch that interview here:

"Today Austin City Manager Spencer Cronk announced that he has selected Interim Chief Joseph “Joe” Chacon as the permanent chief for the Austin Police Department. A selection we fully expect to be approved by Austin City Council at the September 30th meeting. The APA has spoken with Chief Chacon at length and on numerous occasions about our concerns for where the department stands and the lack of leadership. During his tenure thus far, we have experienced an unprecedented staffing crisis, a rise in violent crime, and a plummet in officer morale all with no clear vision on how to address these issues. We respect the process which selected Chief Chacon, but our concerns that these issues will only get worse under his tenure remain very real. While the Austin Police Association certainly respects and admires the years of service and working knowledge Chief Chacon has of our department, the road ahead is not an easy one. Over the past several weeks members from the APA have had countless meetings with City Officials including members of council and the city manager where we made clear our high hopes for the department if Chief Emada Tingirides were to be named the next Police Chief. Officers looked forward to having an outside perspective and a renewed vision for our department from a strong female leader who has seen struggle first-hand in some of the most trying environments and overcame those challenges. She has a proven track record of engaging the community to accomplish a measurable decline in violent crime — something Austin is seeing on the rise. The Austin Police Association is disappointed that with this selection; City Council did not seize the opportunity for change that officers and the community were ready and willing to bring about. We remain committed to doing all that we can to make the Austin Police Department one of the premier law enforcement agencies in the United States yet again, despite the uphill battle with leadership we may face."

The Austin Justice Coalition, which has been critical of APD's response to calls for change following the summer 2020 protests, said in part:

"He’s been immersed in this department since 1998. The City needs to put him on the record for how he will collaborate with them and the community to bring real change before they approve him."

The organization asked City Council to affirm the following before approving Chacon's selection: