NOT GUILTY: 2 Jacksonville men wrongfully convicted of 1976 murder freed after 42 years behind bars

One of the men was just 18 when he was arrested. He is 61 years old now. Report finds "no evidence of guilt, credible evidence of innocence." 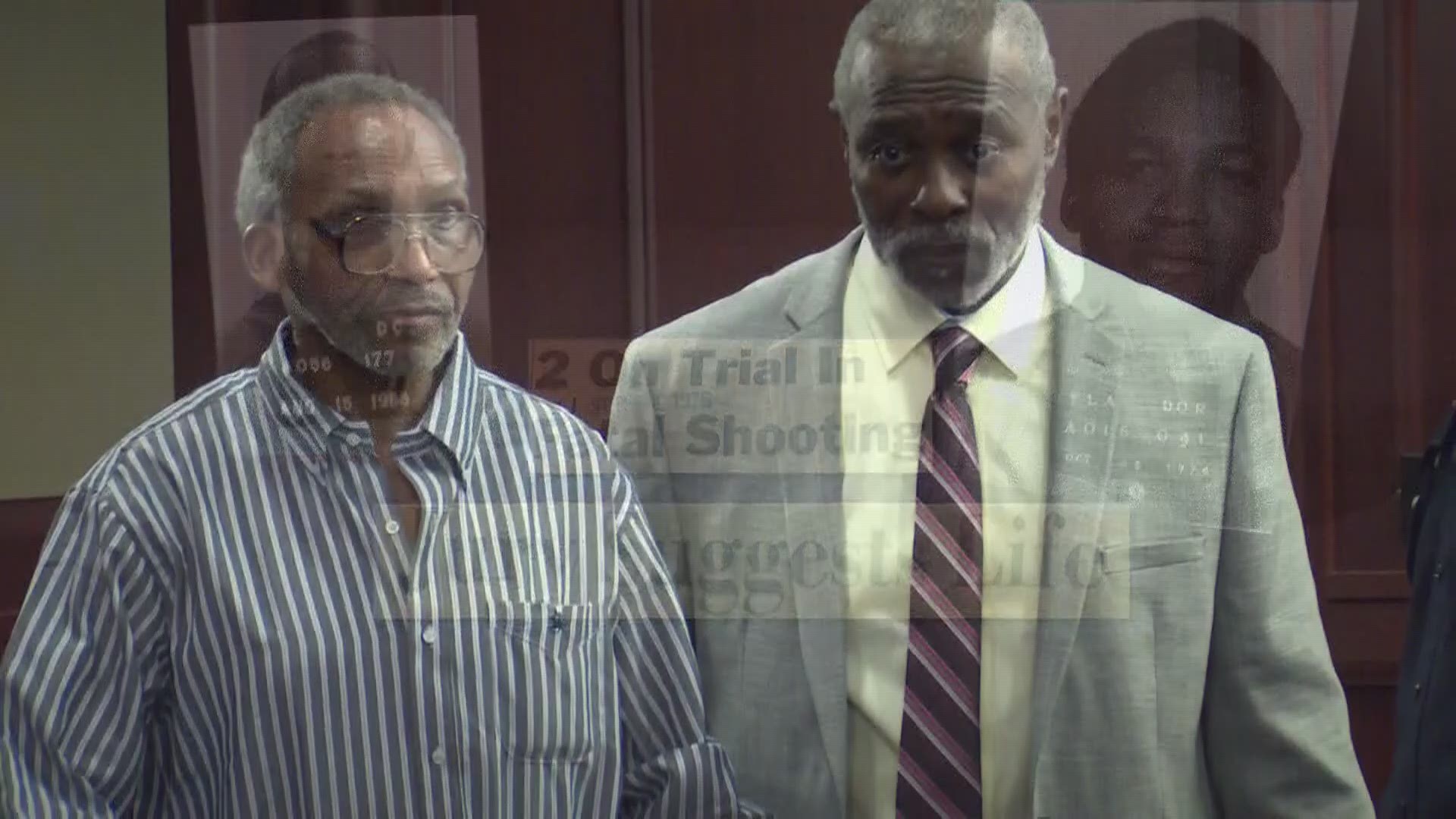 JACKSONVILLE, Fla. — Two Jacksonville men who faced the death penalty for the murder and attempted murder of two women in 1976 were slated to be released Thursday after prosecutors determined they were wrongfully convicted of the crime.

The decision to free Clifford Williams and his nephew Nathan Myers, who spent a collective 84 years in prison, came after a brief hearing in the courtroom of Circuit Judge Angela Cox.

Her order allowed the men to walk out of the courtroom on their way to freedom -- the first time they have been out of police custody since May 2, 1976.

The judge’s order follows a ten-month investigation by the Conviction Integrity Review unit (CIR), created by State Attorney Melissa Nelson last January. It marks the first time in Florida history that a conviction reversal was initiated by prosecutors.

The report is the capstone of an investigation that included reviewing decades of documents, tracking down key witnesses, even reenacting the shooting at the still-extant crime scene. It is the work product of the unit’s director, Shelley Thibodeau, who ultimately helped draft the motion to free Clifford Williams and his nephew Nathan Myers, who called the day “historic.”

The report was reviewed and approved by the five-member panel created by Nelson.

“This is not just Shelley Thibodeau or Melissa Nelson, this was a whole bunch of eyes on this,” Nelson told First Coast News. “It was important that the public has confidence in the work of the Conviction Integrity Unit.”

The men, who were 33 and 18 years old the night of their arrest, faced the death penalty for the shooting death of two female acquaintances, Nina Marshall and Jeanette Williams (no relation to the defendant). Clifford Williams was initially sentenced to death in the electric chair before that sentence was overturned and converted to life in prison.

The men, now 76 and 61, maintained their innocence from the start. Each filed multiple motions over the years seeking post-conviction relief and rehearings, but those motions were denied. It wasn’t until Nathan Myers reached out to the State Attorney’s Office around the time the CIR was being created that their claims underwent serious review.

“Please let me say that I am absolutely actual [sic] innocent of any involvement in committing these crimes for over 42 years I’ve been in prison for,” Myers wrote in a letter to prosecutors, laying out flaws in the case.

The unit’s investigation underscored those flaws, finding convictions predicated in part on a terrible legal strategy.

“Defense counsel waived opening statements, presented no witnesses, and entered no evidence,” the report notes. “This poor strategy amounted to an ineffective assistance of defense counsel.”

That failed legal strategy was compounded by a seeming disregard by police and prosecutors for evidence that undermined their case.  Law enforcement relied solely on the eyewitness testimony of one of the victims, Nina Marshall, who was shot in the neck but survived. Unfortunately, her testimony was inconsistent with the facts – and contradicted by a wealth of evidence:

•    45 alibi witnesses testified the men were at a nearby birthday party during the attack, including 26 who swore they remembered seeing the men in the apartment when the shots were fired. None was called to testify by defense attorneys Ken Vickers and James Harrison, who presented virtually no defense of their clients. “The physical evidence that contradicted Victim Marshall’s testimony was inexplicably never know to the jury,” the report notes.

•    Nina Marshall testified that Myers and Williams fired at her and her girlfriend, Jeanette, while standing at the foot of their bed. She testified that she saw muzzle flashes from two guns and that the two men stepped over her body as they left the room. However, ballistics and forensic evidence show only one gun was used, and the shots were fired from outside the apartment – punching through a screen, peppering curtains with bullet holes and sending shards of window glass onto the bed.

•    No blood or gunshot residue was found on either man, even though they were arrested outside the crime scene.

•    The bullet strikes on Jeanette’s body were incompatible with Marshall’s version of events; the trajectory and bullet fragments supported other evidence that the shots came from the window.

Hank Coxe, the original prosecutor, assured told jurors that Nina’s word was all they needed to convict the men. Though eyewitness accounts are viewed with skepticism today, and considered unreliable by most experts, at the time it was the gold standard in criminal cases.

Nina Marshall's word was all they had. The report notes, “It is upon [her] testimony alone that these two men are serving life sentences in the face of overwhelming contradictory forensic evidence and alibi testimony.”

Coxe, now a celebrated defense attorney, agrees the thinking on eyewitness testimony has changed. He does not oppose the conviction reversal. Ironically, as a former member of the Florida Supreme Court Innocence Commission and a champion of conviction integrity reviews, he personally urged Nelson to create a mechanism to review wrongful convictions.

Nelson acknowledges as much, saying “but for Hank” this case likely would never have undergone review.

Coxe acknowledges the review of a case he prosecuted case caused him some heartburn. “More than heartburn.” But he believes in the value of that review. “There is merit to having system like this,” he noted. “Ask Mr. Williams and Mr. Myers -- I’m sure they share that thought right now.”

Asked if he had any direct message for the men, he demurred. “I wouldn’t even talk about that here,” he told First Coast News. “That’s more personal.” But Coxe, who agrees the men would not be convicted today, is not convinced of their innocence. “Do I think it’s possible?” he asks. “Well I’d be lying if I didn’t. It’s possible. Yeah, it’s possible.”

The report found the men were likely innocent.

“Every investigative step the CIR took corroborated Defendant Myers’ claim of innocence and placed into doubt Victim Marshal’s identification,” the report notes. “There is not sufficient evidence of guilt to support the Defendants’ convictions … [but] there [is] sufficient credible evidence to support a finding that the defendants are in fact probably innocent of the charges.”

Myers’ attorney Seth Miller with the Innocence Project of Florida agrees. “This is a clear case of actual innocence,” he says. “These guys are innocent, based on credible evidence.”

Two additional points underscore Myers’ claim of innocence. A teenager facing his first felony charge, Myers rejected prosecutors’ offer of a plea deal (either two or five years, depending on memories) and chose instead to fight the case at trial – where he faced the death penalty.

Though unknown at the time, a third man – now deceased – confessed to the crime to at least five people years later. The CIR unit was able to demonstrate that man was at the scene the night of the shooting.

Because so much time has passed, determining a motive – either for the original murder or Nina Marshall’s conflicted testimony – is impossible to discern. Nina Marshall died in 2001. Both defense lawyers are dead.

But even absent that information, the report is unambiguous:

“These men would not be convicted by a jury in 2019 if the jury were presented with all the exculpatory evidence.”