Capitol riot suspects facing some of the most serious charges from the Jan. 6 insurrection are asking judges to let them out of jail before trial. 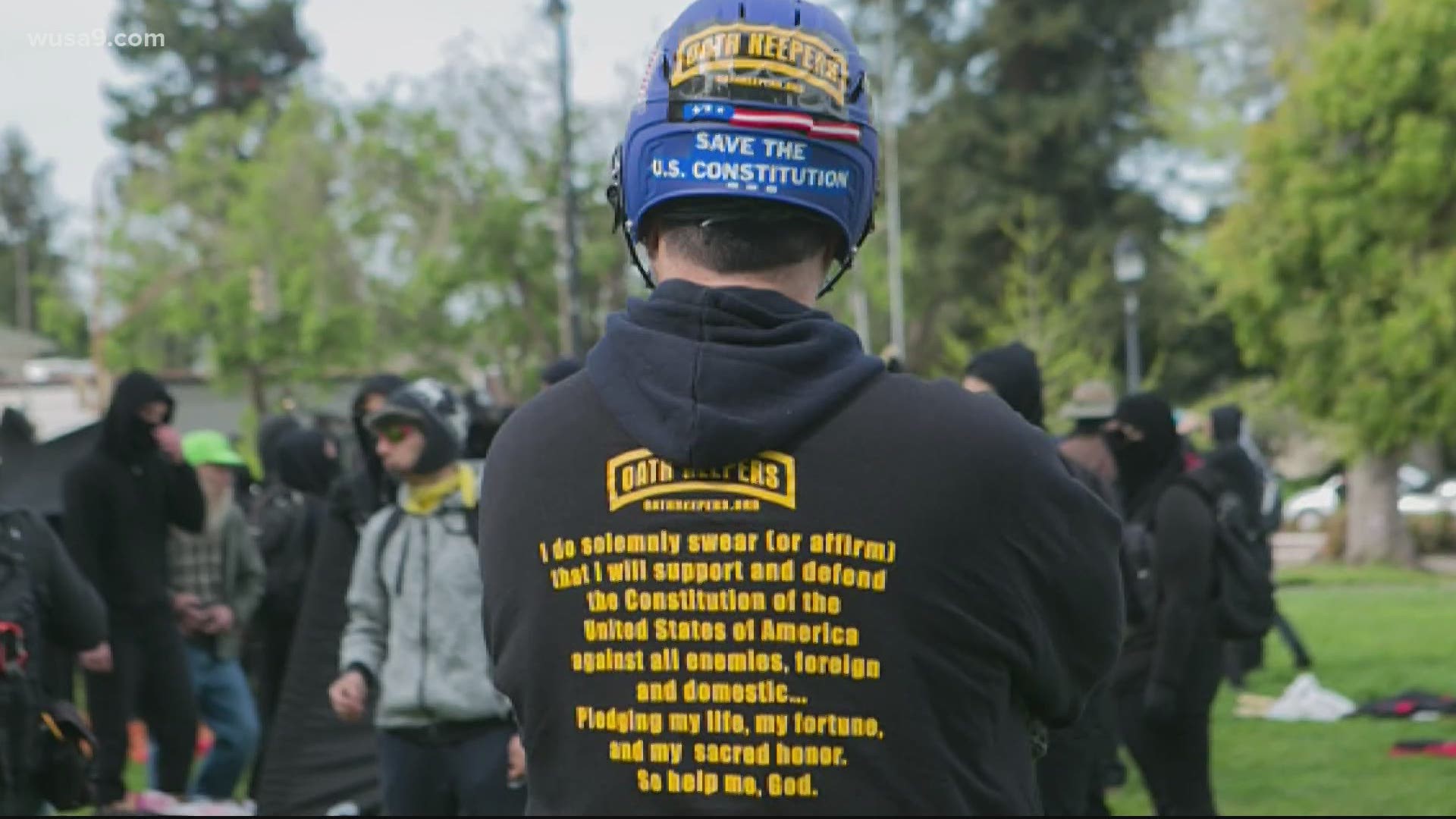 WASHINGTON — Dominic Pezzola, an alleged leader of the Proud Boys, and Thomas Caldwell, an alleged member of the Oath Keepers, are both fighting hard to be released from a D.C. Detention Center before their trial. Neither have been released yet, but that doesn't mean it won't happen before their cases go to trial.

Both Pezzola and Caldwell claim they were tricked into taking part in the attack. Legal experts say the decision of whether or not to keep Capitol Riot defendants behind bars before they have their day in court is a tough one.

Caldwell is in jail for allegedly leading part of the raid on the U.S. Capitol as a commander of the Oath Keepers. The 66-year-old says he wants to go back to his family in rural Clarke County, Virginia.

“Commander Tom” as he is referred to in court documents wants a judge to release him on bond before he is tried on conspiracy charges for allegedly helping organize what prosecutors called a “quick strike force” of Oath Keepers seen storming the Capitol in military formation.

According to court records, Caldwell now claims he isn’t actually a member of the Oath Keepers, is a disabled veteran who once worked for the FBI and is not a flight risk.

At his arraignment Monday, Caldwell ignored his own attorney’s advice to stay silent and spoke directly to the judge.

“I know this is out of order, Your Honor, and I beg your indulgence, sir," Caldwell said. "But my life hangs in the balance. These things are taken out of context.”

His attorney added that Caldwell is a former member of the U.S. Military and “...feels tremendous remorse.

"Tremendous regret," the attorney said. "He knows he was deceived.”

RELATED: Students call on Mt. St. Mary's University professor to resign after he wrote about attending protest that led to uprising at Capitol

Dominic Pezzola, an alleged member of the Proud Boys, faces 11 criminal counts including assaulting a police officer. But at a hearing petitioning a judge to release him, his attorney said Pezzola was “gravely mislead” into joining the Proud Boys.

Pezzola’s attorney told the judge he's not a flight risk, adding that he's married with kids. His wife is a former pre-trial supervisor in the New York State Court system, who is willing to put the family’s home, which they own outright, up for collateral to ensure Pezzola shows up for court.

Neither Pezzola nor Caldwell has convinced a judge to release them on bond yet.

The judge in Caldwell’s case agreed he is not a flight risk, but still denied the motion for bond stating that he presents a continued danger to the community. The judge noted that in the aftermath of the insurrection, Caldwell messaged one of his co-defendants saying, "We need to do this at the local level. Let's storm the Capitol in Ohio. Tell me when!"

Caldwell’s attorney told the judge he plans to appeal.

In the Pezzola case, U.S. District Judge Timothy Kelly said he needs a few weeks to consider the arguments.

“These cases pose a lot of interesting and difficult decisions," Kelly said.

Clark Neily is the Vice President for Criminal Justice at the CATO Institute, a think tank that describes itself as being dedicated to the principles of individual liberty, limited government, free markets and peace.

"There's a sense that I think sometimes it's so obvious, this person must have committed this crime, that we want to see them punished immediately," Neily said. "And what some people forget, is that pretrial detention, holding somebody in jail before their trial is not a permissible form of punishment. You don't leave somebody locked up pending trial simply because the public thinks they deserve it.”

Neily said these judges do have some discretion in deciding what constitutes a “danger to the community” and said even judges feel the spotlight they are under right now amid calls to punish those for the Jan. 6 insurrection.

Sign up for the Get Up DC newsletter: Your forecast. Your commute. Your news