Video showed an officer kneeling on the man's neck while he begged for help. 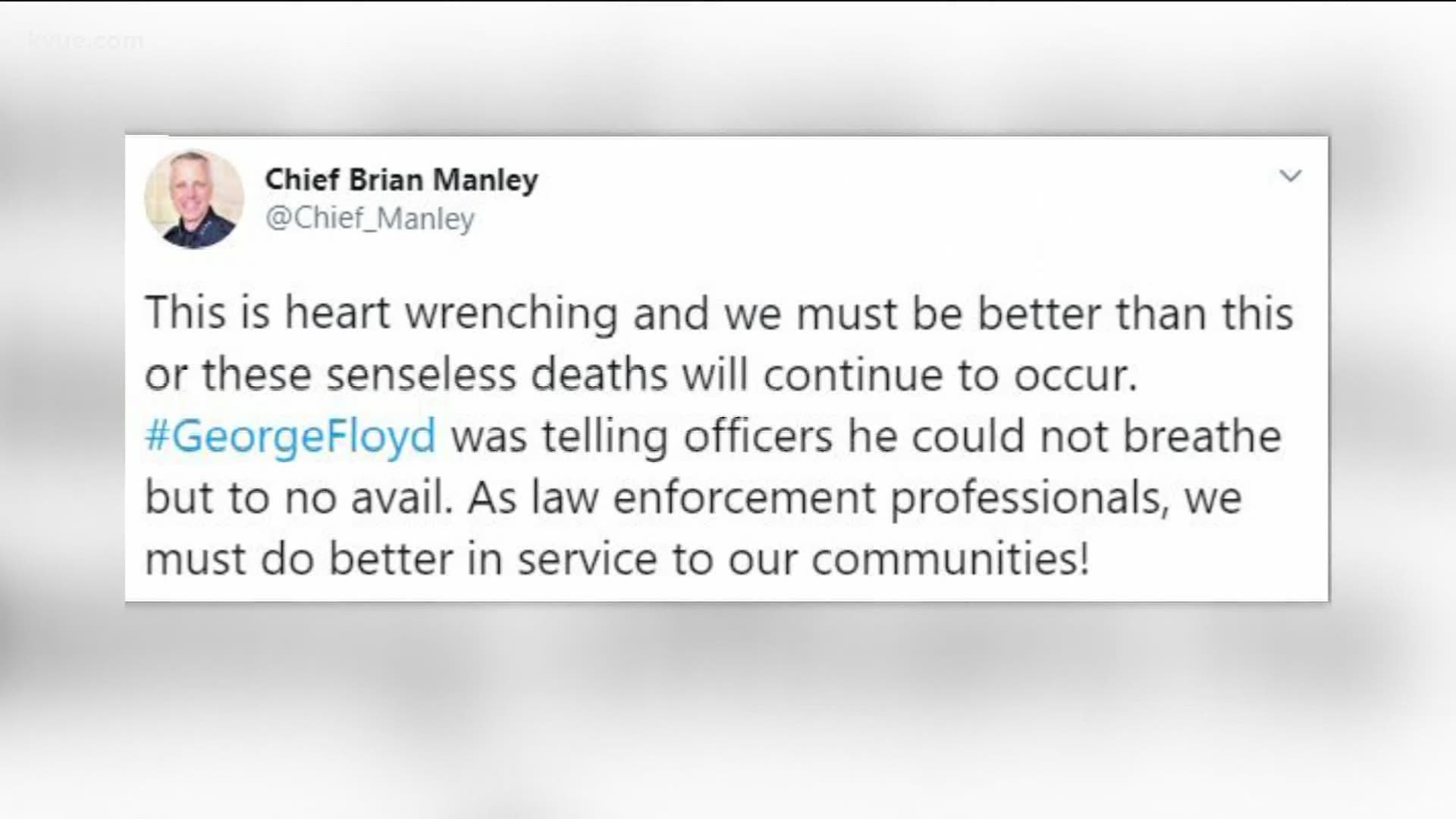 AUSTIN, Texas — After a video showing a man pleading for help as a Minneapolis police officer kneeled on his neck sparked public outrage, Austin-area police chiefs are speaking out.

George Floyd of Houston, Texas, died in police custody Monday. Now, agents from the FBI and the Minnesota Bureau of Criminal Apprehension (BCA) have been asked to investigate possible civil rights violations.

Four police officers involved in the incident have since been fired.

"This is heart wrenching and we must be better than this or these senseless deaths will continue to occur," said Austin Police Chief Brian Manley. "#GeorgeFloyd was telling officers he could not breathe but to no avail. As law enforcement professionals, we must do better in service to our communities!"

"We in law enforcement CAN'T look at the George Floyd case and turn a blind eye," said Round Rock Police Chief Allen Banks. "There is NO justification for these actions! We MUST hold officers accountable for atrocious decisions! #UNITYinOneCommUNITY"

"We ALL should condemn this type of policing," said Pflugerville Police Chief Jessica Robledo. "There is no place for this abuse in our profession. When you hear these words you need to STOP! We are better than this! #GeorgeFloyd"

"I sadly must again address my officers and ask how they felt about the unlawful homicide of George Floyd, an American citizen In Minneapolis," said University of Texas Police Chief David Carter. "Police leaders must confront the failures of our profession or we are doomed to repeat them and cast further doubt on our legitimacy."

Floyd, 46, was reportedly in the city for work. Police claimed he was resisting arrest.

Reports state police were responding to reports of a forgery in progress and were advised the subject, who appeared to be under the influence, was sitting on top of a vehicle. When police arrived, Floyd was found inside his car and was told to exit the vehicle. A press release states he proceeded to physically resist them.

Video from the scene shows an officer kneeling on Floyd's neck as he begs for help, saying "I cannot breathe." After several minutes, the man on the ground stops moving. A bystander can be heard saying "his nose is bleeding" and "did they (expletive) kill him?"

PHOTOS: Minneapolis citizens react to the death of George Floyd