President Trump has staked his reelection chances on restarting the nation’s economy but there are signs the recovery has stalled amid a resurgence of COVID-19. 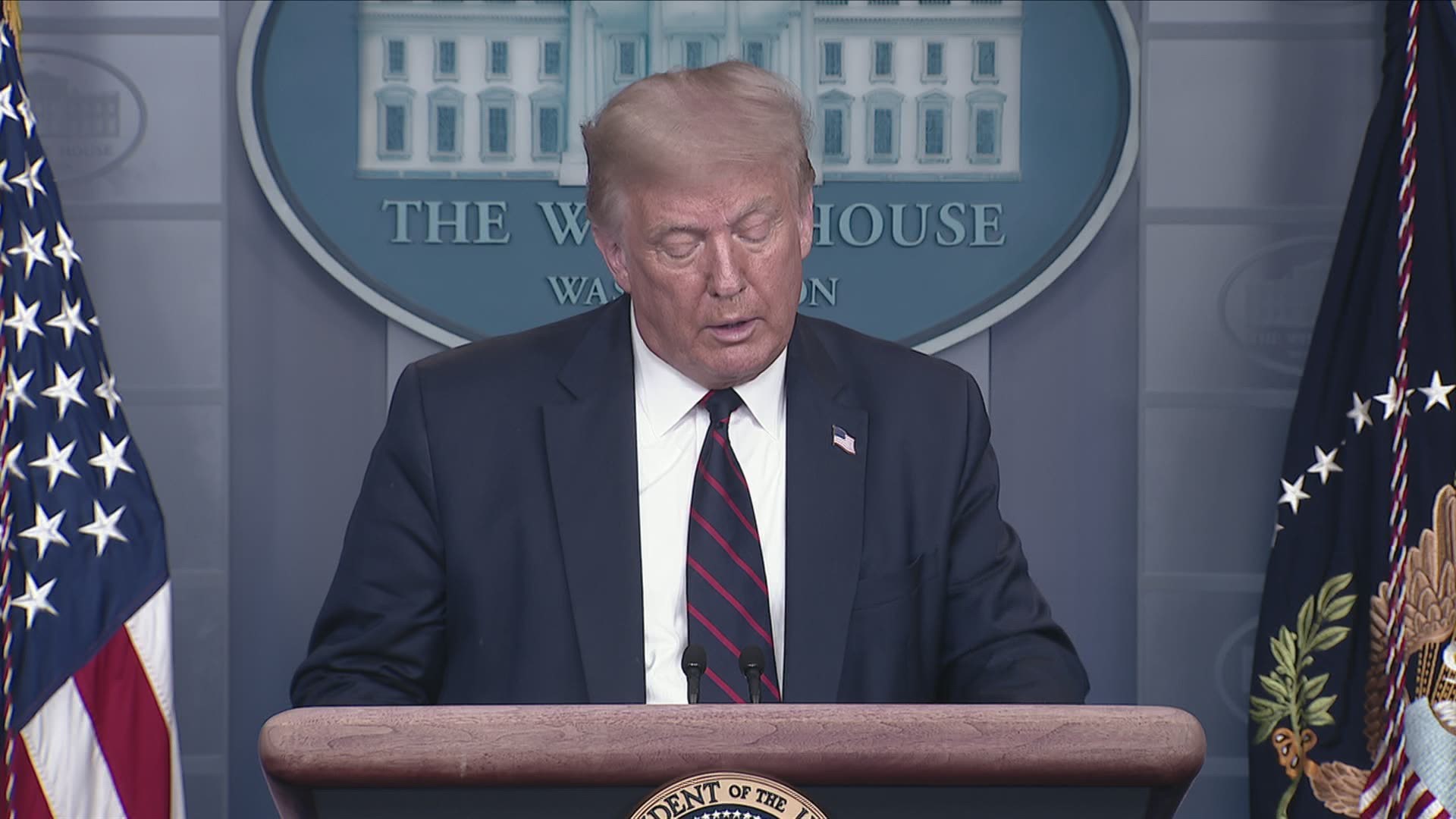 WASHINGTON — President Donald Trump was arguing Thursday against another “blanket shutdown” of the economy amid a surge of coronavirus cases in the U.S.

He spoke Thursday afternoon at the White House after the government reported that the pandemic sent the U.S. economy plunging by a record-shattering 32.9% annual rate last quarter.

The president said at the news conference that the nation has gotten a handle on the virus, but “it can come roaring back when you least suspect it.” Trump insists, though, that the economy should stay open.

He says a widespread shutdown like what happened in March and April “would no longer be the answer at all.” He adds that “small shutdowns can be very helpful” but not lengthy ones.

Trump has staked his reelection chances on restarting the nation’s economy but there are signs the recovery has stalled amid a resurgence of COVID-19.

Trump also spoke about his administration's response to the coronavirus pandemic, as well as the upcoming election and his dislike for mail-in voting.

So far, the COVID-19 pandemic has claimed over 150,000 lives in the U.S., by far the highest death toll in the world, plus more than a half-million others around the globe.

While deaths from the coronavirus in the U.S. are mounting rapidly, public health experts are seeing a flicker of good news: The second surge of confirmed cases appears to be leveling off.

Scientists aren’t celebrating by any means, warning that the trend is driven by four big, hard-hit places — Arizona, California, Florida and Texas — and that cases are rising in close to 30 states in all, with the outbreak's center of gravity seemingly shifting from the Sun Belt toward the Midwest.

Over the past week, the average number of deaths per day in the U.S. has climbed more than 25%, from 843 to 1,057. Florida on Thursday reported 253 more deaths, setting its third straight single-day record. The number of confirmed infections nationwide has topped 4.4 million.

A bleak government report released Thursday said the economy shrank at a 33% annualized rate in the second quarter of the year, a stark reminder of the economic damage afflicting the country as lawmakers debate the size and scope of new relief.

Shortly after the release of that report, Trump tweeted out a suggestion about postponing the November election. That idea was quickly rebuffed by Republican officials in the states and on Capitol Hill.

Trump on Thursday tweeted unsubstantiated allegations that the election would be “inaccurate and fraudulent” because of the widespread use of mail-in voting. It's a claim that’s been debunked by election security experts and the five states that already rely exclusively on mail-in ballots. He went on to suggest a delay in the election — something he cannot legally do on his own.