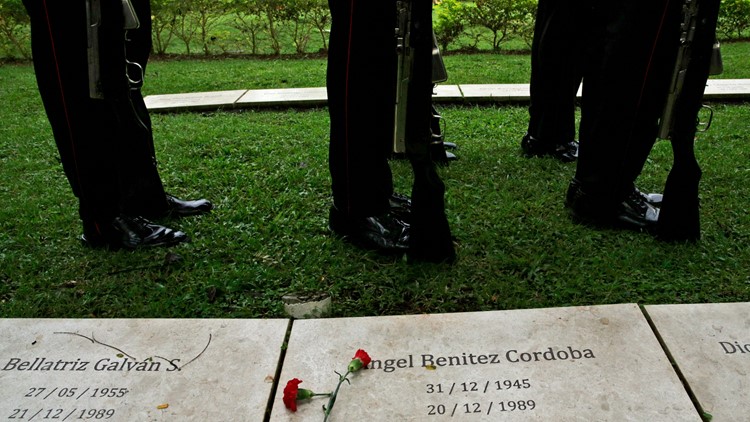 Photo by: AP
Police stand next to the graves of people who died during the 1989 U.S. military invasion that ousted Panama's strongman Manuel Noriega, on the 30th anniversary of the invasion, during a ceremony in honor of the dead at Jardin de Paz cemetery in Panama City, Friday, Dec. 20, 2019. (AP Photo/Arnulfo Franco)

Panama begins exhumation of victims from 1989 US invasion

Forensic workers in Panama are preparing to exhume the remains of some victims of the 1989 U.S. invasion. It's an effort that is lifting the hopes of Panamanians who had relatives die or disappear and have lived with unanswered questions for 30 years.

Authorities gave the approval for exhumation of the 19 bodies from a Panama City cemetery after a truth commission documented about 20 disappearances from the U.S. military action to topple strongman Manuel Noriega.

Prosecutor Maribel Caballero told reporters Monday that the remains will be compared to a database of DNA from relatives.Yellow tape was placed Monday where workers would start the digging.

“For me this is a celebration of being able to know where my father will be,” said Brigitte Bethancourt, 60, daughter of Braulio Bethancort.

She told the Associated Press, “We are already past the mourning.” Bethancourt currently lives in California.

It is estimated that around 514 Panamanians, including civilians and military members, were killed during the invasion. According to the U.S. military there were about 23 casualties among troops, but human rights groups estimate the number of Panamanian deaths is possibly higher.