The co-star with her husband on the reality TV show died after an almost 2-year battle with cancer. 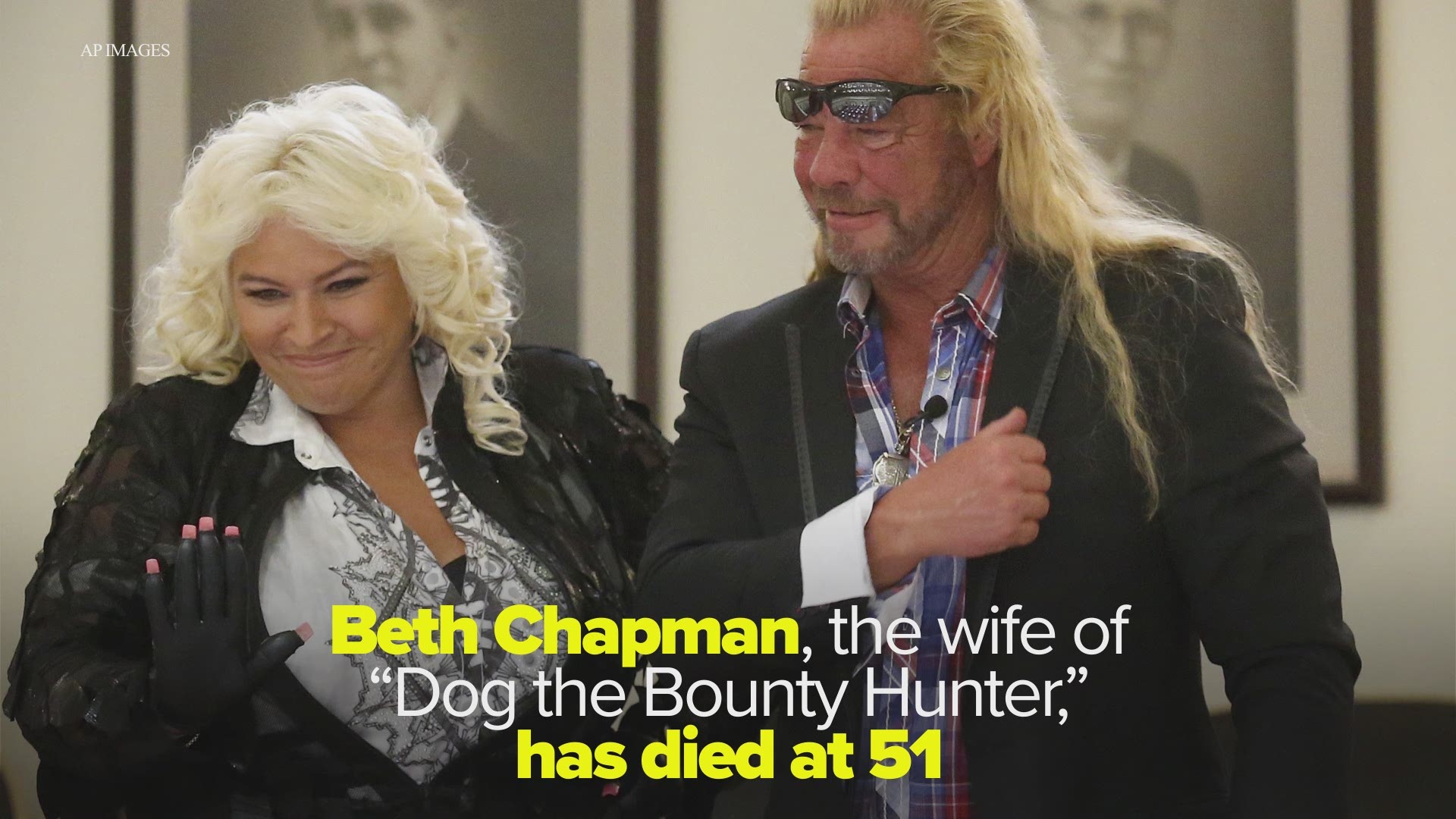 HONOLULU — Beth Chapman, who co-starred with her husband on the "Dog the Bounty Hunter" reality TV show and later spoke out against some bail reform measures as leader of a national bail agents' organization, has died.

Chapman died early Wednesday at Queen's Medical Center after an almost 2-year battle with cancer, Mona Wood-Sword, a family spokeswoman, said in a statement. She was 51.

"This is the time she would wake up to go hike Koko Head mountain," her husband, Duane "Dog" Chapman, posted on Twitter early Wednesday. "Only today, she hiked the stairway to heaven. We all love you, Beth. See you on the other side."

On Friday, Chapman had difficulty breathing and passed out momentarily, Wood-Sword said. She was taken to a hospital, and doctors put her in a medically induced coma to spare her pain while treating her, the spokeswoman said.

Born Alice Elizabeth Smith in Denver, Chapman had lived in Honolulu since 1989. In 2006, she and Duane Chapman, the self-proclaimed world's best bounty hunter, married during a sunset ceremony at a Big Island resort after being together for 16 years.

"I've already been cuffed and shackled by Beth anyway," he told The Associated Press at the time.

The wedding took place a day after the death of Duane Chapman's 23-year-old daughter, Barbara Katy Chapman, who was killed in a car accident near her home in Fairbanks, Alaska, Wood-Sword recalled. The couple decided to go forward with the wedding to celebrate her life. The wedding was featured in an episode of the A&E series "Dog the Bounty Hunter," which followed the duo's exploits in apprehending people who have avoided arrest warrants.

The couple met when he posted her bond for a shoplifting arrest, she told Rosie O'Donnell on "The Rosie Show."

"He came walking out there, I said: 'Oh yes he will be mine,' " Chapman said.

There are 12 children between the couple. They had 15 grand-children and one great-grandchild, Wood-Sword said.

In 2007, Hawaii lawmakers honored the couple for their work capturing criminals.

"It's kind of extraordinary to be called a crime fighter," she said at the time. "I'll have to go home and get my Wonder Woman outfit."

"Dog the Bounty Hunter" was canceled in 2012. They later starred in Country Music Television's "Dog & Beth: On the Hunt."

She was later elected president of the Professional Bail Agents of the United States and opposed some bail reform measures nationwide. She opposed eliminating the cash bail system, saying it would put the public at risk. "People are not in jail because they are poor," she said in 2017. "They're in jail because they broke the law."

She boasted of being the youngest ever to receive a bail license in Colorado at 29. That record was beat by her stepdaughter Lyssa Chapman daughter who became licensed at age 19, she said.

Funeral services are expected to be held in Honolulu and Colorado, Wood-Sword said.

This version corrects that the couple wed a day after the death of Duane Chapman's daughter.