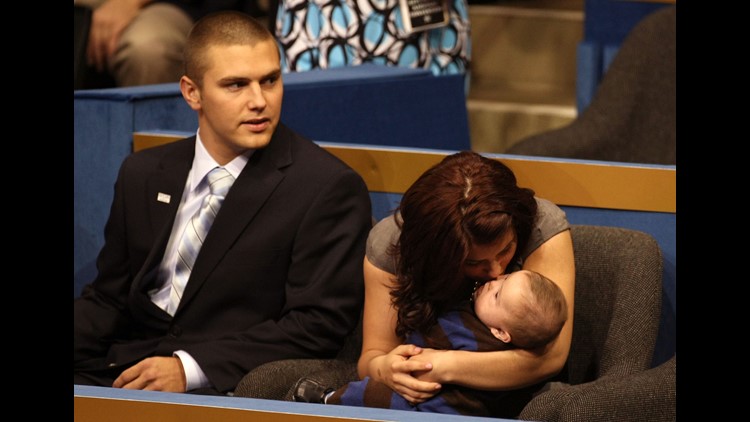 Track Palin sits with Willow Palin while holding Trig Palin on day three of the Republican National Convention (RNC) at the Xcel Energy Center on September 3, 2008 in St. Paul, Minnesota.

At first it was described as “domestic violence.” Now, disturbing new details have emerged in the weekend arrest of Track Palin, a son of former Alaska governor and vice presidential candidate Sarah Palin, including the allegation that he left his father, Todd, bloodied and bruised.

Police were called to the home Saturday night by Sarah Palin, where her husband was found to be bleeding from cuts on his head, according to an affidavit by Wasilla Police Officer Adam LaPointe. Todd Palin told police the dispute began when his son, Track Palin, 28, called to retrieve his truck.

Palin, 53, said he told his son not to come over but was told that he would come anyway to “beat his ass,” LaPointe wrote, according to the Anchorage Daily News. The elder Palin said he fetched a pistol to protect his family.

Track Palin told police he broke a window, disarmed his father and put him on the ground and hit him around the head, the newspaper reported.

LaPointe wrote that the senior Palins had left the home when police arrived and that Sarah Palin was visibly upset.

According to the Los Angeles Times, Sarah Palin called police at 8:30 p.m. and said her son was "freaking out and was on some type of medication."

Track Palin yelled at officers, calling them “peasants,” and “moved around in a strange manner” for about 15 or 20 minutes before being arrested without incident, the affidavit states. He said he had “consumed a few beers.”

He was arraigned Sunday and charged with felony first-degree burglary and misdemeanor fourth-degree assault. He was still jailed at Mat-Su Pretrial Facility as of Monday evening, according to the Times.

Court records did not immediately list an attorney for him, the paper reported. He is scheduled for a preliminary hearing next week.

Todd Palin, reached by the Daily News, declined to comment about the incident, other than to say, "We're fine. We're fine."

On Sunday, the Palins' attorney, John Tiemessen, released a statement saying: "Given the nature of actions addressed last night by law enforcement and the charges involved, the Palins are unable to comment further. They ask that the family's privacy is respected during this challenging situation just as others dealing with a struggling family member would also request."